by Neil Fauerso May 5, 2021
FacebookTwitterEmail 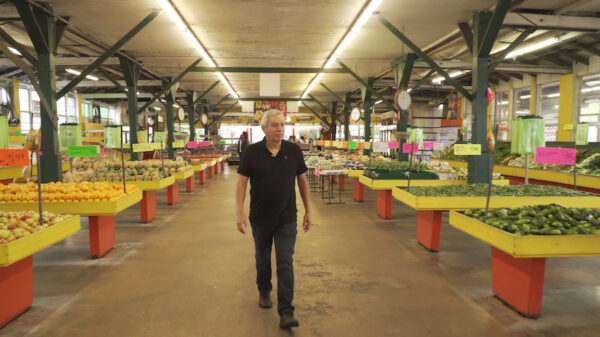 Adán Medrano in a still from “Truly Texas Mexican”

On numerous occasions, an (always white) coastal friend or acquaintance has said to me: “Tex Mex is gross. I like real Mexican food.” What they mean is that the cheesy, creamy, double-fried takes on Mexican food that fill San Antonio’s Riverwalk and travel the country through chain restaurants called Big Alamo or Cheesy Juan’s is what constitutes Tex Mex. And the process of the creation of this cuisine involves some porcine, Kevin James-like restaurant chain owner stealing recipes from an abuela and adding an avalanche of Velveeta to it. This is its own form of colonial thinking, one that demarcates everything — including food culture — with borders, and designates and exoticizes some ill-defined, vaporous indigenous entity, culture, or people as the real, which can only be stolen from, pillaged, and desecrated.

Of course this is not how the world is at all. In Truly Texas Mexican, a food documentary that is something much more profound and philosophical, the concept of the often-maligned and misunderstood cuisine of Tex Mex is simultaneously layered and uncoiled, like some ever-unraveling corn husk revealing a dish of beautiful richness and complexity.

The documentary cleverly presents itself in a straightforward manner, resembling Bourdain, or Salt, Fat, Acid, Heat, or Who Will Feed Phil, etc. — the modern food travel shows which are supremely watchable as an affable host explores, usually with a good amount of tact and curiosity, a region’s unique cuisine. In this case, it’s the dapper and elegant Adán Medrano, a Houstonian with a background in journalism, writing, and food (one of his cookbooks, also called Truly Texas Mexican, was published in 2014).

The documentary begins as one would expect. Medrano is shown shopping in local South Texas market, eating at small but proud Tex-Mex restaurants in places like Harlingen, and being served rare and regional fare, like a grapefruit pie. Up to this point his journey is pleasant and engaging. But then a subtle shift begins.

Luchino Visconti’s beautiful and melancholic epic narrative film The Leopard (1963) ends with an hourlong scene of a formal ball at a villa. What begins as a party scene slowly becomes something much more universal, haunting, and philosophical. The film becomes not simply a romantic, elegiac chronicle of the twilight of Italian nobility in 19th century, but a cosmic meditation on memory, community, tradition, and loss. 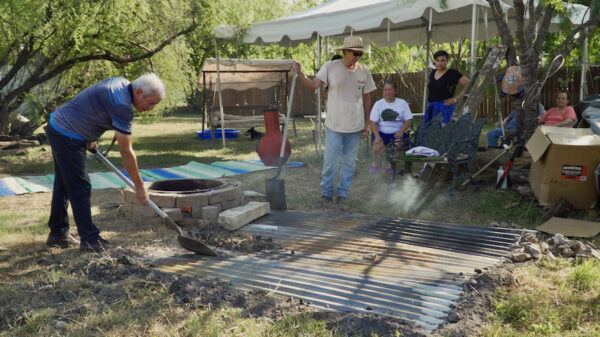 A Leopard-like reverie occurs in Truly Texas Mexican, fittingly kicked off by the preparation of barbacoa. Barbacoa is an ancient cooking technique that originated in the Caribbean, where meat is cooked by building a fire in a hole dug in the earth and then covering it with the leaves of local plants. In South Texas, barbacoa usually means a cow head or goat head, and is ubiquitous at taquerias and Tex Mex restaurants across the region. Truly Texas Mexican presents a day-long barbacoa preparation interspersed with interviews and other footage. What crystallizes throughout the wrapping of the head, burying it, and eventually unearthing it is that this preparation is just as much a ritual, a ceremony, a performance. Making barbacoa has the same totemic gravitas as any Hermann Nitsch piece, and the same surreal grandeur of actions by Joseph Beuys or Carolee Schneemann.

I recognize the hoary cliché of calling food “art”, but Truly Texas Mexican subtly reveals that perhaps our definition of food art has been somewhat limited to the precious, molecular gastronomy pomp and circumstance of El Bulli-type restaurants (e.g. shrimp “ice cream” with a parmesan “foam” sculpted in a way to resemble The Little Prince). Truly Texas Mexican argues compellingly that regional cuisine, and its threaded histories and lineages, is a proud and rich living folk art tradition.

The last third of Truly Texas Mexican is forcefully urgent, political, even righteous, as Medrano interviews South Texas indigenous people whose culture goes back thousands of years, as does their culinary tradition (such as cooking venison). The film is unapologetic about its mission of decolonization and presents one of the most clear-eyed articulations of the concept I’ve encountered. Decolonization is not simply increasing diversity or removing remnants and edifices of colonial rule, but also a recognition that colonialism — as a system, a philosophy, a state of being — can be categorized as pre-Copernican. The only sun is thyself, rolling across the land like an incandescent bowling ball, flattening everything it touches into a two-dimensional gloss.

Medrano and Truly Texas Mexican view decolonization, in its poetic essence, as “meeting a stranger as a friend.” In the last minutes of the film, all the people interviewed express their personal relationships to food, to the land, to history. There is something awe-inspiring in connecting to a past that stretches so far and so languorously that it feels akin to eternity. Texas, despite its seething brays of conservative loonery, is and always has been an ancient region. It’s history is in Galveston where Juneteenth was announced; at the last remaining Spanish aqueduct in the U.S. in San Antonio; the petroglyphs you can glimpse for a fleeting moment on the rock cliff faces while you float down Devil’s River; the purple shadows stretching over the Palo Duro canyon like some giant unseen flying saucer was passing right above. And it’s in the food most of us here eat several times a week. May we all take a little more time to really taste it. 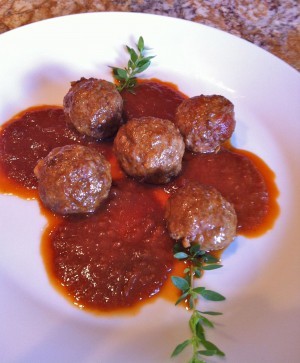 (Recipe from the book Truly Texas Mexican: A Native Culinary Heritage In Recipes)

To Make the Chile Purée and Meatballs

1. Remove the seeds from the chiles by cutting a slit lengthwise in each chile to open it and emove the stem with the attached seeds. Remove all the other seeds in the chile pod.

2. Place the chiles in a large pot and cover them with water. Bring to a boil, turn off the heat, and let the chiles steep for 15 minutes so that they will rehy- drate. Drain and allow to cool. Discard the water.

3. Place the chiles, onion, garlic, oregano, and salt in a blender. Add 1 cup of clean water and blend on high until the paste is completely smooth, with no large particles. Add a little more water if needed. If there are large particles in the paste after you are done blending, strain the paste through a fine-mesh sieve. Set aside.

4. Heat the canola oil in a Dutch oven and add the chile purée, with caution because there will be splatter as the liquid meets the oil. Fry for 10 minutes. The color will deepen and the purée will thicken. Set aside.

6. Mix together the pork and beef.

7. Add the beaten egg to the meat. Squeeze excess milk from the bread and mix it with the meat using your hands or a large spatula or spoon.

8. Add 8 tablespoons of the ancho chile purée to the meat and mix thoroughly.

9. Form the seasoned meat into 40 1-1/2-inch balls and place them on a large cookie sheet.

10. Roast the meatballs in a 400°F oven for 12–15 minutes until browned and crispy on the outside. Remove from the oven and allow the meatballs to rest for 10 minutes. They are ready to serve with the adobo.

To Make the Adobo

11. To the remaining chile purée add the tomatoes, chicken stock, sugar and vinegar and bring to a boil. Cook for 30 minutes until the adobo begins to thicken. Taste and correct the salt.

Serve the meatballs on a plate and pour the adobo over them. Or you can serve the adobo on the side, with toothpicks for each guest to dip.

These albóndigas are moist and delicious even on the second day and will keep in the fridge for 5 days.

Love the photo of the old Canino’s farmer’s market in Houston! I know the new version will be nice, but I will miss the scrappy old one with its orange and yellow color scheme.

Great article on “Truly Texas Mexican” and Adan Medrano! We’ve enjoyed the cookbook and looking forward to watch the film.
From true believers in the great power of culinary art.