A Saturday With the Bush League 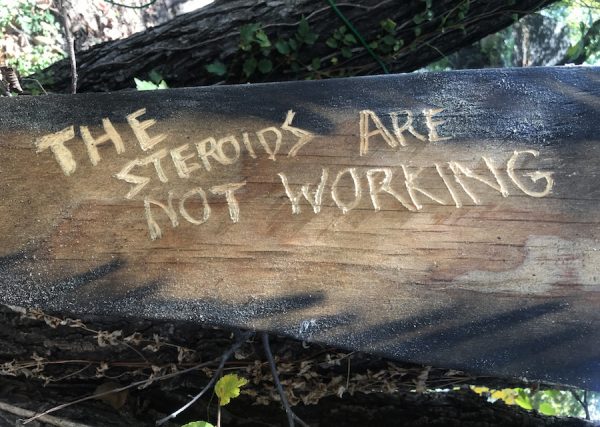 On Saturday, October 19, I spent the afternoon at Sweet Pass Sculpture Park in Dallas  for the opening reception and performances for Bush League, the current exhibition by the Texas-based art collective BUXTOOF/Cattywampus Press. San Antonio artists Daedelus Hoffman and Lindsay Starr founded the press and the exhibition project Dirty Dark Place (Backdoor Biennial). The duo’s mission is to provide free creative experiences in non-traditional settings. Hoffman gave me a tour of the Sweet Pass exhibition, which includes a lot of site-specific interventions within the park and addresses a baseball theme. On the day I was there, the performances and installations generated a carnival-like atmosphere. 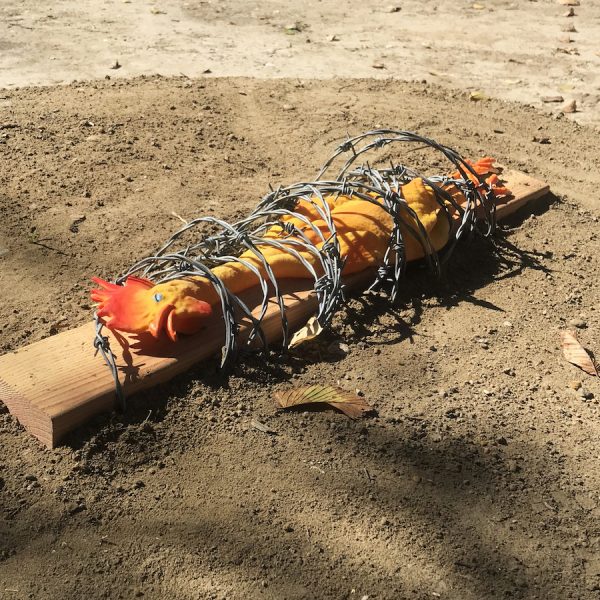 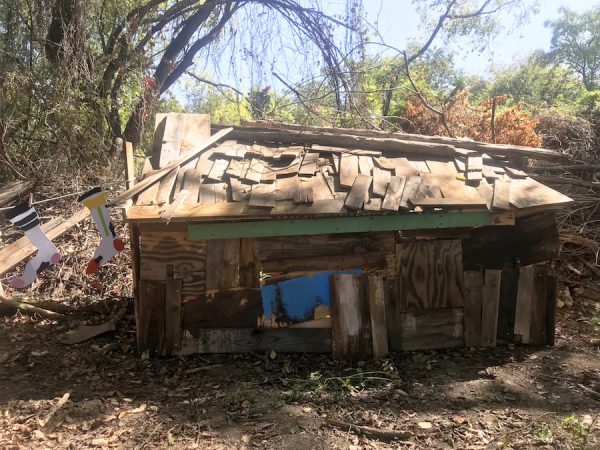 My first encounter was with men wearing ‘Bush League’ baseball jerseys. The center of the park had been transformed into a baseball diamond. There was a rubber chicken wrapped in barbed wire on the pitcher’s mound — a ‘choked chicken’ reference. And the sexual (i.e. baseball) references continued throughout the day, including what I thought was a sex shack in the rear corner of the lot. Thankfully some little leaguers set me straight and told me it was a dugout. I had my Bush League tarot card reading by Olivia Salazar. Evidently, something bad is imminent in my future, since the slugger card was upside down. I played catch with the mascot Petie Sweet (Matthew Maher) and refrained from getting a Wild Thing/Major League Charlie Sheen hair cut. I did however, witness three others getting a Wild Thing cut, courtesy of Sweet Pass co-founder Tamara Johnson. 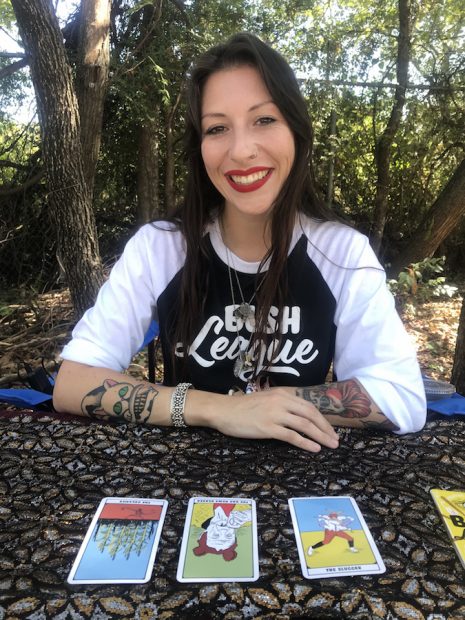 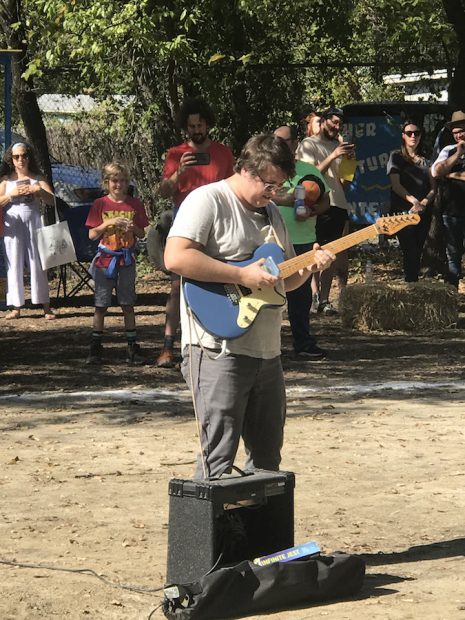 There was a fun performance with little leaguers and their dads — Team Good and Team Game — who ran around the diamond in opposite directions high-fiving and repeating the phrase “good game!,” as well as Shelby David Meier’s deadpan rendition of the national anthem, which he played on his guitar as he paged through a copy of Infinite Jest. 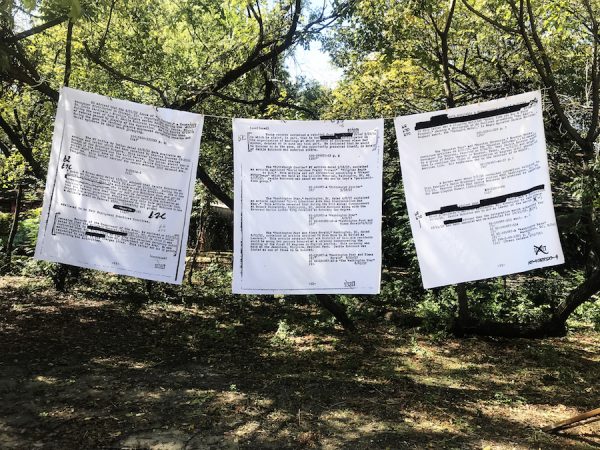 My favorite work was an installation featuring redacted pages from Jackie Robinson’s FBI files about his work with Civil Rights movement in Texas. Printed on large pieces of fabric and hung on clothesline throughout the park, the pages gently swayed in the breeze, reflecting the silhouetted shadows of tree leaves. Another installation featured a video projection of a congressional hearing about the use of steroids. As the video played, an automatic pitching machine blasted balls into the screen, creating a giant tear at the top. Hoffman pointed out that the gravel on the baseball diamond was all porcelain. The discarded and crushed beer cans scattered on the ground were handmade, as was the gum on the bottom of the bleachers.  Nice attention to small details.

I wondered how the work would read without the performances to activate the space. Will it seem like an abandoned theme park? As evidenced by the many in attendance (all ages), the day was successful in reaching a wide audience — baseball and non-baseball fans alike. 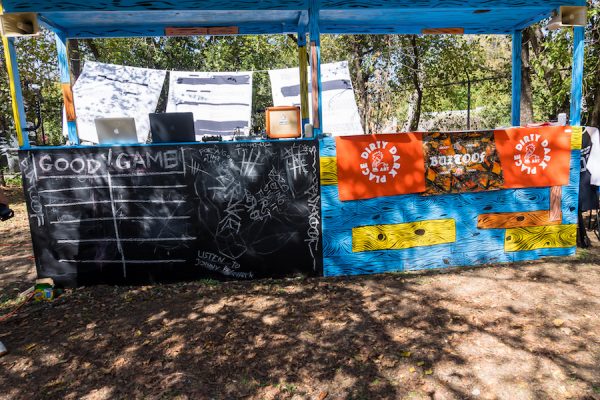 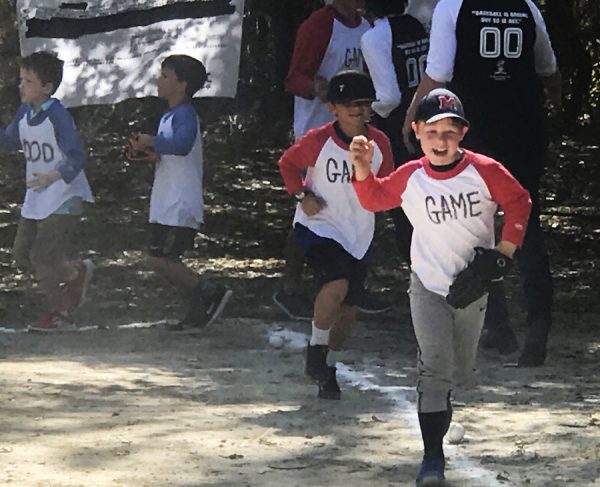 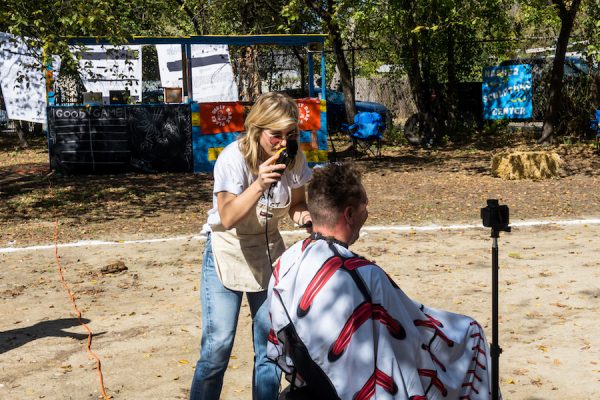 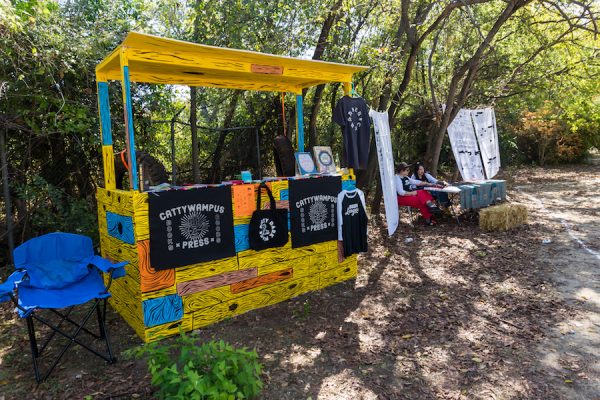 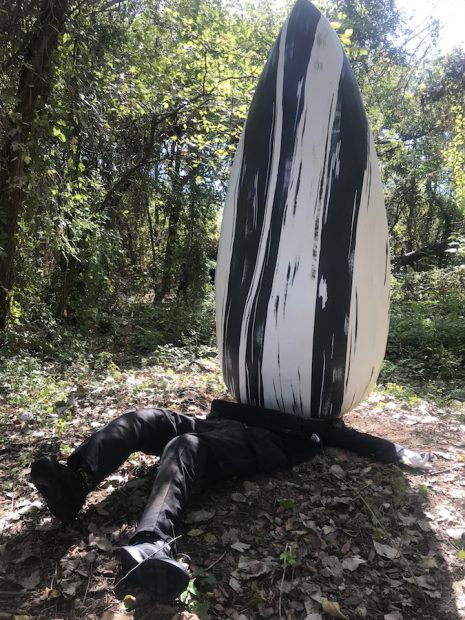 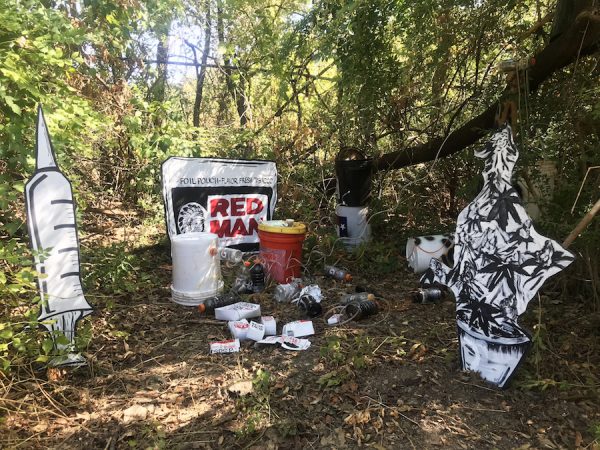 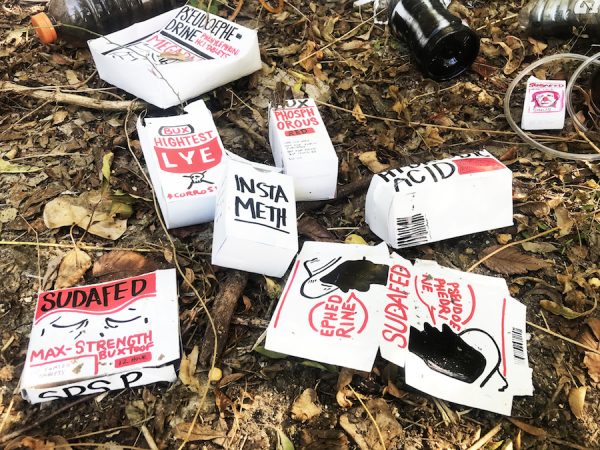 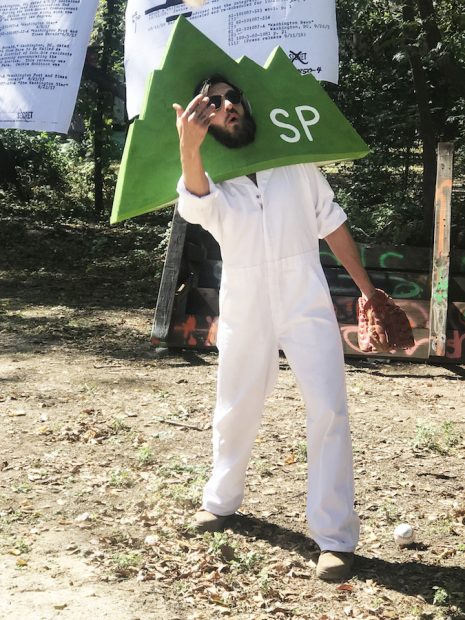 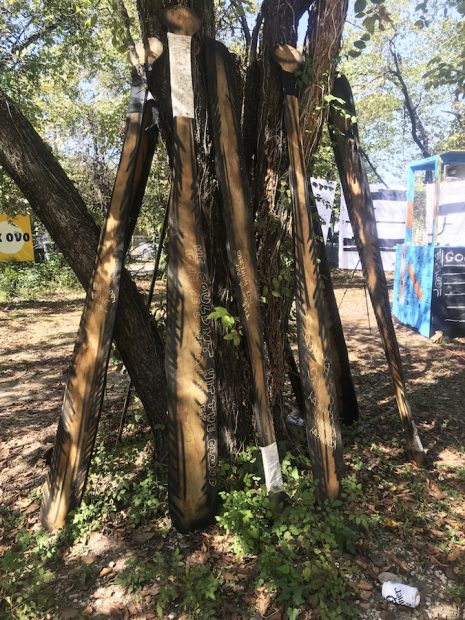 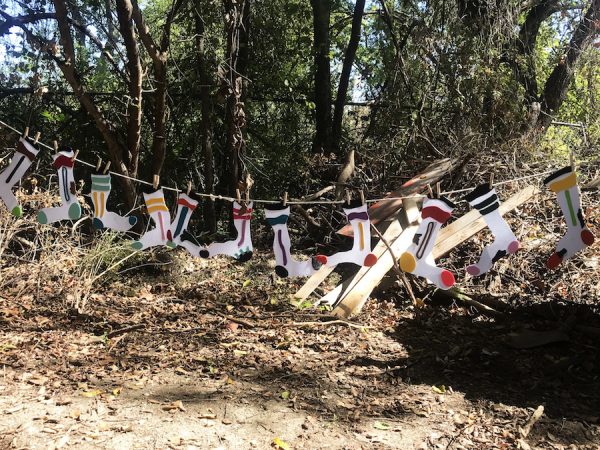 Socks next to dugout 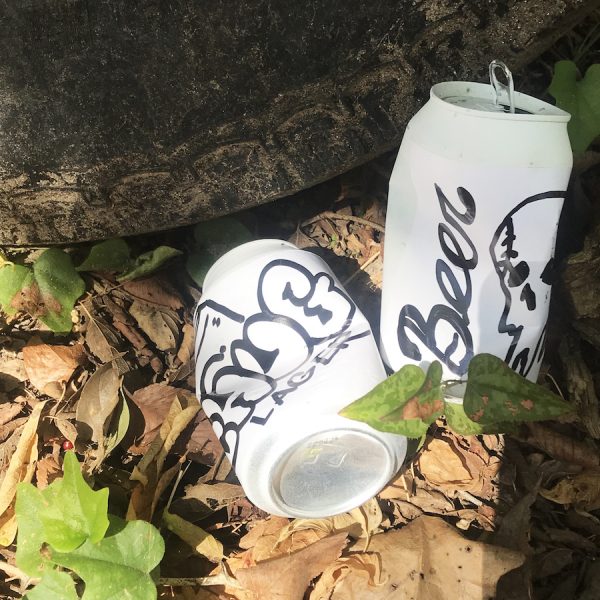 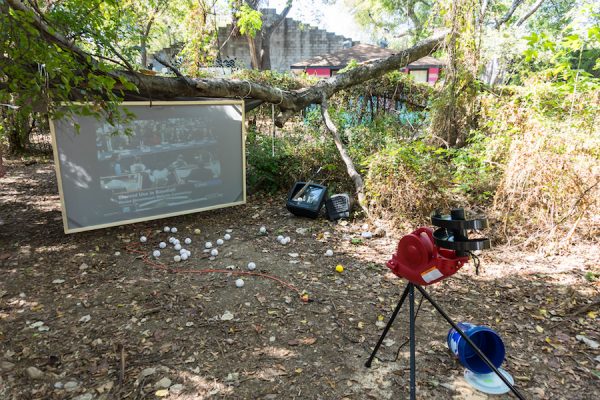 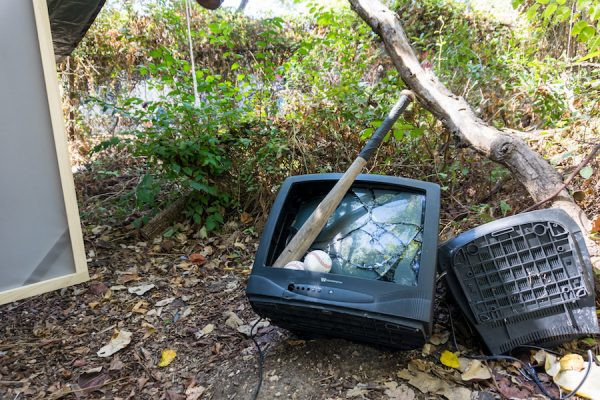 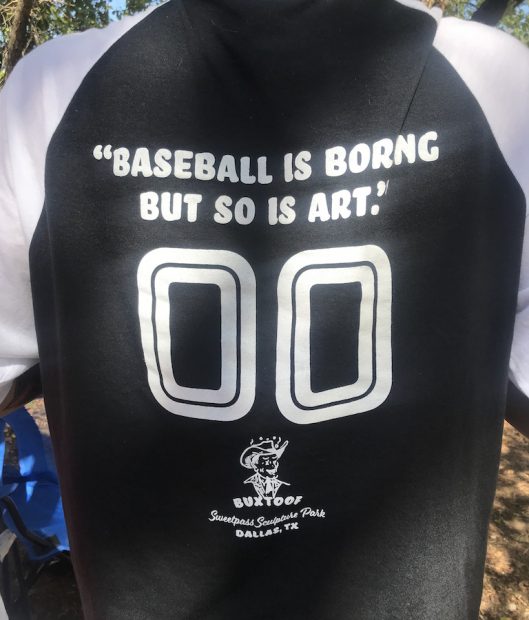