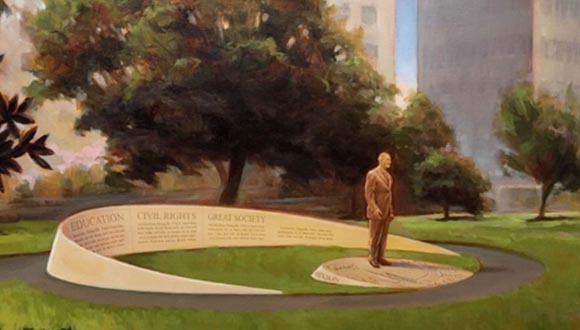 Last Thursday, Houston’s mayor, Sylvester Turner — along with civic leaders Luci Baines Johnson and Charles C. Foster, and Gensler lead architect CK Pang — broke ground downtown for a new Lyndon Baines Johnson presidential monument. The monument will be located in Little Tranquility Park at Bagby and Capitol Streets, in proximity of another presidential statue, that of the late George H.W. Bush, which stands at Bagby and Franklin streets.

“The LBJ monument and surrounding features will be a tourist attraction, a history lesson, an inspirational gathering place and a testament to how persistence and dedication of one person can change the course of our city, state, nation and the world,” says Mayor Turner. “In Houston we recognize our debt to great presidents without regard to political affiliation, but we do prize highly respected late presidents who spent formative years right here in our city.”

Scheduled for completion in 2020, the Johnson monument was funded by a $250,000 matching grant from The Brown Foundation of Houston to start the campaign funding for the project. Support also comes from the Cullen, HEB, Hobby and Sarofim Foundations.

The location in Little Tranquility Park contains magnolia trees planted in memory of  the astronauts killed in the two NASA space shuttle disasters: Challenger in 1986 and Columbia in 2003. NASA’s Manned Space Center (renamed the Johnson Space Center in 1973) was renamed in honor of Johnson, who ensured that it  would be located in Houston.

“The monument is in recognition that a former Houstonian high school teacher is regularly ranked by presidential historians as one of the ten greatest Presidents in U.S. history,” says Foster, co-chair of the LBJ Presidential Monument Advisory Board. “LBJ passed more significant legislation than all of his successors together, including the three major Civil Rights bills that accomplished the efforts of President Abraham Lincoln and Ulysses S. Grant to bring full legal rights to all Americans, and the 1965 Immigration Act that made it possible for immigrants to legally immigrate from China and India.”

For more information about the sculpture, email the mayor’s office here.

Really…doesn’t anyone remember his role in escalating the Vietnam War and lying about the progress being made while thousands of Americans died? Short term memories.