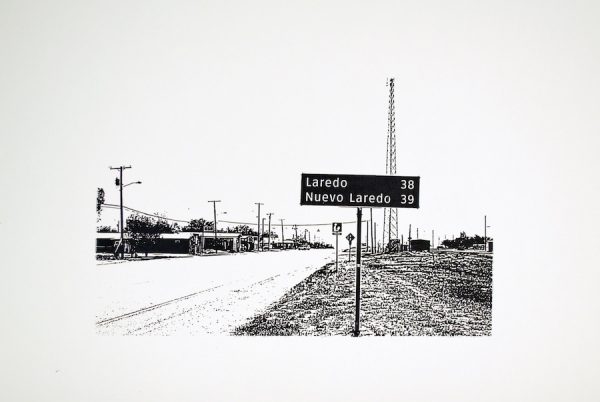 It’s a tell because its meanings are hidden in plain view and like the border it makes reference to, there is no “there” there. Rather, it refers back to the location of whoever is viewing it.

So how is the print different than just seeing the sign while driving? — the difference lies in the action of the artist — seeing the metaphoric potential of the sign, photographing it, manipulating the photograph as a screen print and hanging it in a gallery — this process brings the meanings at rest in the sign to attention. Pretty much the role of any artist anytime, anywhere, but this bare bones description of the dynamic at play is so central to Shipton’s way, that it bears stating — not so much because it’s obvious, but because the obvious so often goes unnoticed.

And this is the heart of her work.

In similar fashion, her sign vinyl/masking tape cityscape, There’s a beauty in time. You just have to hear it., which filled a large gallery last summer at the Blue Star Contemporary, offered entrance through the image of a doorknob. This is significant because there really was alot of vinyl and tape defining buildings, trees, ladders, doors, windows, etc. — basically an array of stuff one might encounter on a meander through, say Berlin, the city which birthed the piece, or San Antonio, where the artist makes her home.

Said doorknob, just a tiny circle of vinyl in the huge mural, somehow called out as a focal point, and was practically voicing its presence, beckoning one to enter a stick figure world, simultaneously looking and listening.

Fade to Ruiz-Healy Art, San Antonio, Texas, October, 2019, where Shipton’s exhibition, Listening to Berlin, offers its rewards through October 26. As the title indicates, this work is derived from the artist’s 2018 residency at Künstlerhaus Bethanien in Berlin, where she spent her time wandering the streets, taking in the sights and sounds of everyday life happening at ground level.

The project does not include a sound piece as the title suggests, but invites the viewer to sit on a plywood bench made by the artist listening to… what? Maybe the sound of one’s own imagination, but not really. The synesthesia suggested by the title of the show in contrast to its contents works as though an intersection of the senses conspires to lead one to a single spot: HERE (wherever that may be).

The word LISTEN penetrates a flat plane of plywood between the seats and an intensely focused light shines through the word to an angled mirror below, casting a barely visible trace of the word on the opposite wall. 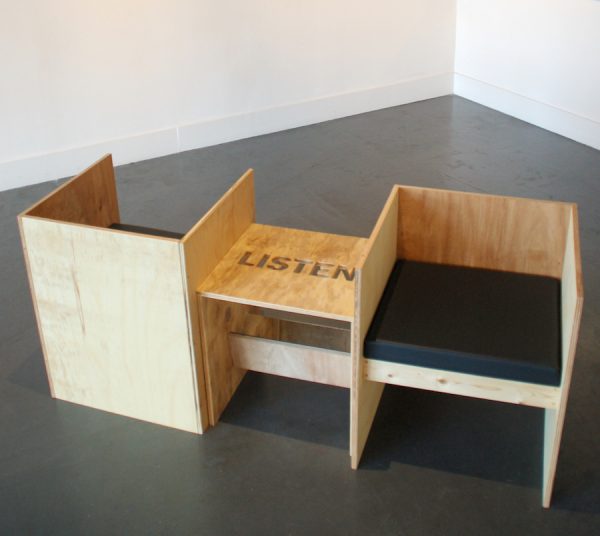 This obsession with signs and signals which offer moments of decision, choice, reckoning — leading to pausing, waiting, listening — reaches back to the late ’90s, when Shipton first began her series of “you are here” benches. The austere nature of this previous work takes one not to anything resembling sensory overload, but rather the opposite — the simple notion of just being present and knowing it without pointing to it.

Just as Los Dos Laredos offers its explosion of meanings without mentioning them, the deceptive simplicity of this artist’s work is inherent rather than implied, and certainly not explicit.

Randomness finds currency everywhere in the show. The only guide to discovery when selecting her images was Shipton’s daily walk in the city. This open-ness to accident was there from the beginning of her residency — the tape ball that was the inspiration for the subsequent Blue Star mural was an object just found in the studio upon her arrival. She kept it as is and brought it back to San Antonio, where it was given its proper credit in that project, enshrined on a pedestal, not in a precious way, but more as a gesture: Thank you, Tape Ball. In the exhibition at Ruiz-Healy it is present as a bit of colored tape, flat on the wall and titled Mural At Rest in a representation of her work space in Berlin. 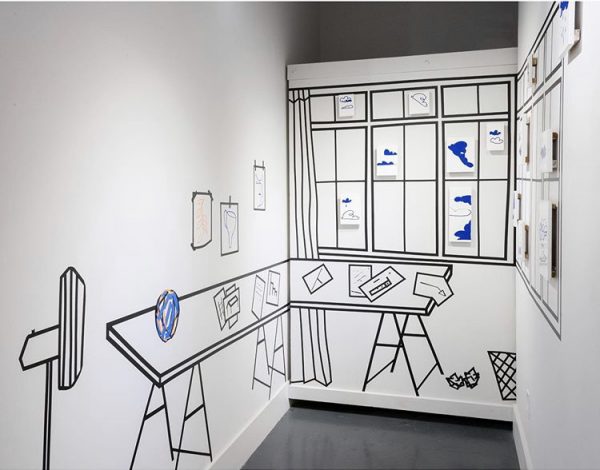 The numerous screen prints in Listening To Berlin document the artist’s wanderings in that city, finding what is there, but also finding what was in her own perceptions as made emblematic by the overwhelming Is-ness of whatever she happened upon. It is simply amazing how “something” takes up residence in “nothing” if one is able to surrender to it.

Ha samples a bit of random graffiti, but its simplicity allows meanings to pour forth. Associations fly: a partial laugh, a Eureka moment, a sardonic bit of skepticism, or the title of a lost Samuel Beckett play. The choice is yours. 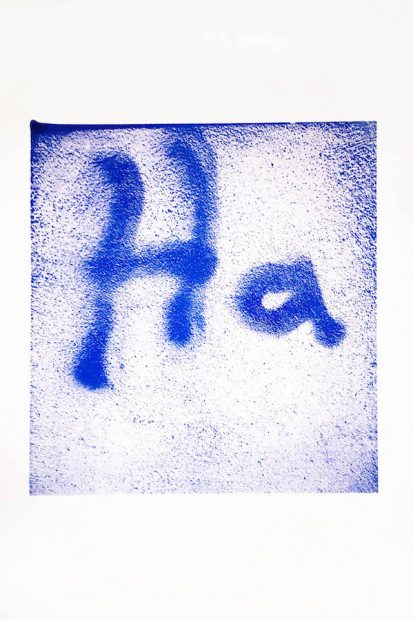 In contrast to graffiti, #2, an official numerical indicator on the entrance to a building is presented. Consequently, all that we get is all that is wrapped up in that number, a number that would void all existence if not for the fact of it. Without hesitation one knows that 1 would be a bummer and then, just like that, we are on to 3, and from there, the vast multiplicity of everything tumbles out like an unstoppable rush of manifestation. 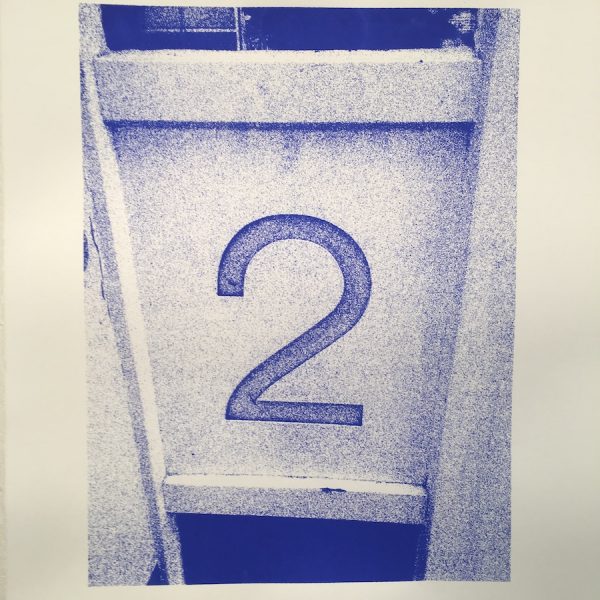 Manhole … well, it depends on what you bring to it — perhaps a sign pointing towards a vague reminder of the Mayan calendar. 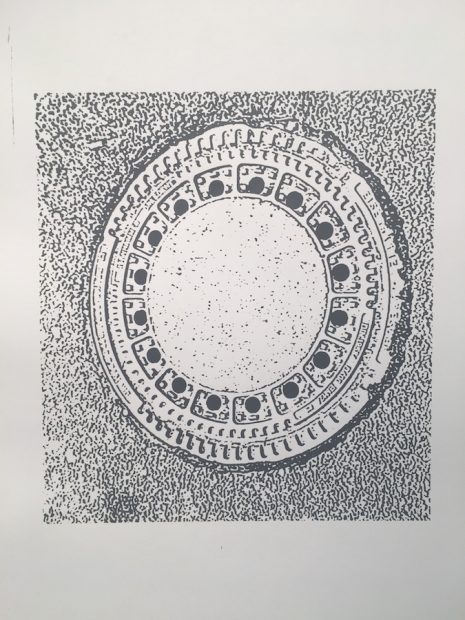 Shipton chooses her images subjectively, isolates them from specific contexts, and gathers them under the umbrella of “listening.” These are joyous inversions, and invite you to get there by not going there.

But do go. Listening waits. 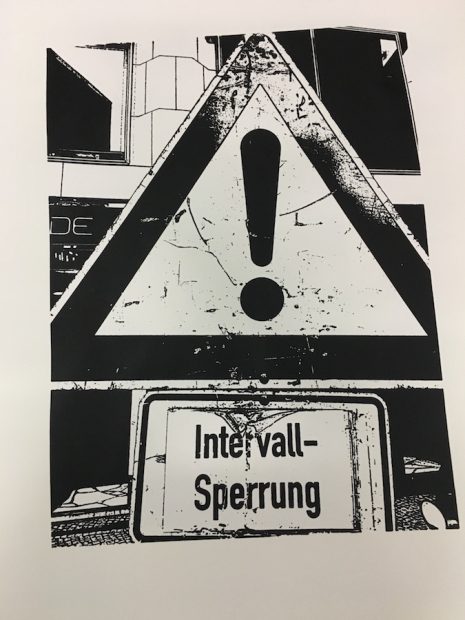 Thanks Hills!!!! And Ethel!!!! Great shows! Great dialogue! I really responded to the synesthesia aspect to the work. Bravo!!!!