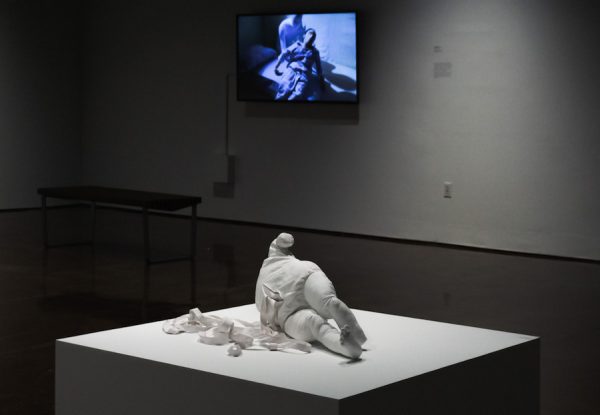 Since the #metoo movement burst forth from the chrysalis of status quo and denialism two years ago, there has been a steady drumbeat by men (and also women such as Bari Weiss and Katie Roiphe) that the excesses of the movement will reach a Jacobin frenzy and innocent men will lose everything. If anything, the opposite is true. Just recently Roman Polanski was awarded the Silver Bear at the Venice Film Festival for his latest work, J’Accuse (An Officer and A Spy), which seems to draw a parallel between the Dreyfus Affair, an anti-Semitic plot that roiled late 19th-century France, and his own conviction for raping a 13 year-old girl in the late ’70s.

Examples of men remaining un-canceled and forgiven abound. There’s a consensus that Carl Andre almost definitely murdered Ana Mendieta, and yet his work is still exhibited around the world (the Chinati Foundation in Marfa has a whole reverential room of his works). Sean Penn is about to publish the second volume of his insane, psychedelically indulgent novel series (Bob Honey….) and is regarded an irascible legend despite once tying Madonna to a chair and beating her for hours. William S. Burroughs has a seemingly immovable roost in our counterculture, despite killing his wife while playing the “game” William Tell with a loaded gun. The narrative of the “Great Man” is very tough to dislodge in a patriarchy, and the collateral destruction some men leave behind is often forgotten even when it is another person’s life. 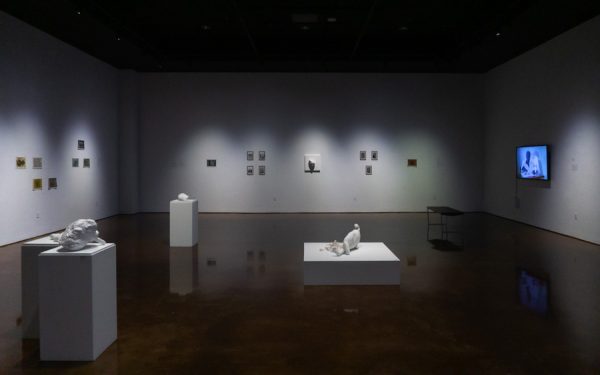 Tatiana Istomina’s remarkable show, Philosophy of the Encounter, on view at Texas State Galleries at Texas State University in San Marcos, centers on Hélène Rytman, the wife of the French Marxist philosopher and critic Louis Althusser, who was murdered by Althusser in 1980. Althusser had suffered from severe depression for years and was often institutionalized, and after strangling Rytman to death he was deemed mentally unfit to stand trial and lived out the remaining decade of his life in freedom. The title of the show takes its name from a collection of Althusser’s work from 1978-1987, and in an act of brilliant reclamation, Istomina takes Althusser’s memoir The Future Lasts Forever and edits and redacts it so that Rytman is the narrator and the work becomes a haunting remembrance of her murder from beyond the grave (this “new” remixed book is titled Fhilosofhy of the Encounter). 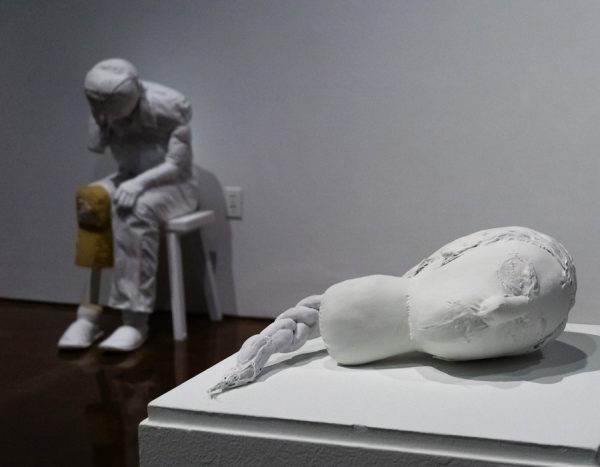 The book is one element of the wrenching solo exhibition that also includes paper works, sculptures (with Mona Sharma) and a puppet show. One of Althusser’s most famous theories was the “Ideological State Apparatus,” which posited that where Repressive State Apparatuses (such as police, military, courts, etc.) use actual violence to maintain the systems of the state, ideological state apparatuses (such as culture, the church, education systems, etc.) work in tandem with repressive state apparatuses to maintain said systems of control. Istomina takes this concept and applies it to the relationship of Althusser and Rytman — the Ideological State Apparatuses are not simply in service of capital and class oppression, but also in service of patriarchy and its consequential erasure (in this case literally) of women. 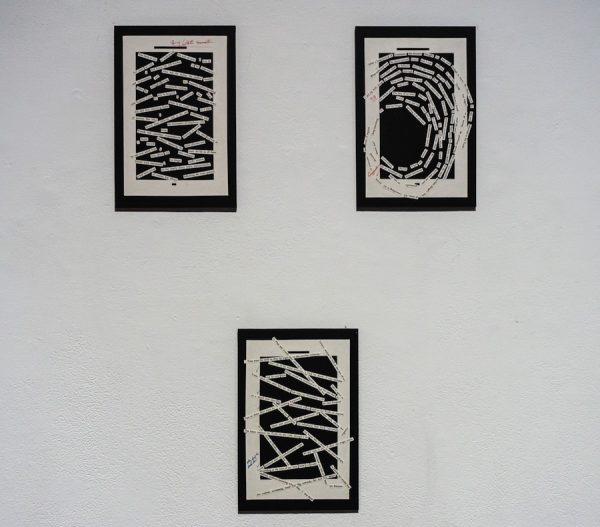 This is a sobering and necessarily sad show. The fractured white sculptures, the puppets with their mournful masks, all speak to the inexorable nature of the forces behind the veil. Althusser’s work often looks at history as systems without a subject. Their machinations are intrinsically dehumanizing — reducing, crumbling, and erasing their subjects. Istomina’s work is an act of defiance against Althusser’s crime and the crimes of history. It takes a razor to the narrative and makes it her own — and ours, and Rytman’s.

In a clever and profound connection to Philosophy of the Encounter, another show up at the Texas State Galleries is Real Time Systems, which presents two seminal late ’60s work that are more vital and convoluted than ever. Real Time Systems takes its name from a 1969 essay in Artforum by Jack Burnham that argues that there are two types of artists — those who work within art systems and those who work with art systems. An example Burnham uses of the latter is the artist Les Levine buying shares of a cassette company and selling them, with the profit or loss thus being the work of art. The medium is the money. 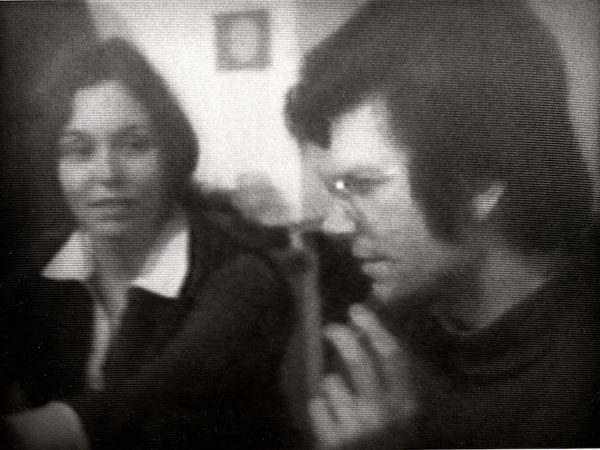 The system esthetics espoused by Burnham are playfully interrogated in the accompanying 1969 film East Coast, West Coast by installation/land artists (and spouses) Nancy Holt and Robert Smithson. Holt and Smithson play “opposing” artists, an east coast intellectual conceptual artist, and a west coast, free-thinking pragmatist. Their perspectives over the course of the film began to slip, overlap, and change, True West-style.

Fifty years later, the essay and video are confounding in their prescience, and yet seem very much of their time. Burnham’s formulation of systems becomes more tenuous in the discovery that working with art systems becomes a part of a new system.

In fact, both of these shows speak to the slippery and amorphous nature of systems, how they replicate and cannibalize their opposition (capitalism’s extremely effective use of selling dissent and revolution — via Che Guevara t-shirts, etc.), and seem often out of reach yet all-powerful. Despite such stacked odds, it’s still valuable to look at the grids, the latticework, the spirals in the desert.

‘Real Time Systems’ through Sept. 29, and ‘Philosophy of the Encounter’ through Nov. 12, 2019 at Texas State Galleries ([TXST]Galleries) at Texas State University in San Marcos.