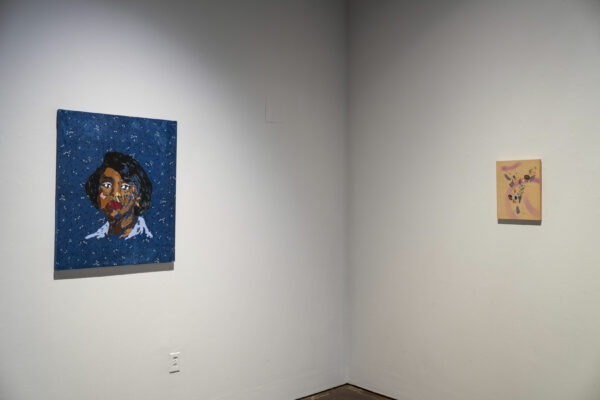 Black figurative painting has become ubiquitous of late in galleries and museums across the country, and, at first glance, New York-based Dana Robinson’s impastoed panels look like particularly goopy examples of it. Look closer, however, and the images appear to be melting, liquefying, a result of the artist creating them using a transfer process. Painting the composition on one support, such as a sheet of paper, she places it face down on another panel and then peels it off, thus transferring the still-wet paint and leaving telltale traces of topographic ridges and liquid smears. The technique produces images as much imprinted as painted, and a handout in the gallery, in fact, refers to the panels as “monoprints.”

Robinson’s exhibition fills a large room at the Texas State Galleries, one wall of which holds seven works that reproduce vintage advertisements, primarily from Ebony magazine. Remember How Much You Loved Koolaid (2022), for instance, depicts a domestic scene. We can make out a kitchen of schematic white lines representing curtains and cupboards, punctuated by daubs of red, yellow, and blue on a slate-colored ground. A mother in an apron and daughter in a pinafore bond over a crimson pitcher. Their faces are blurred to the point of disfigurement, causing the cheery tableau to seem rather discomfiting. New Way to Go Curly (2021), promoting a forgotten hair product, shows two figures with short Afros locked in an embrace. The eyes of the figure facing us stare demonically, blood-red lips part to reveal white teeth, a disembodied hand grasps the head of the person facing away, and the innocuous advertisement of yore suggests vampirism. 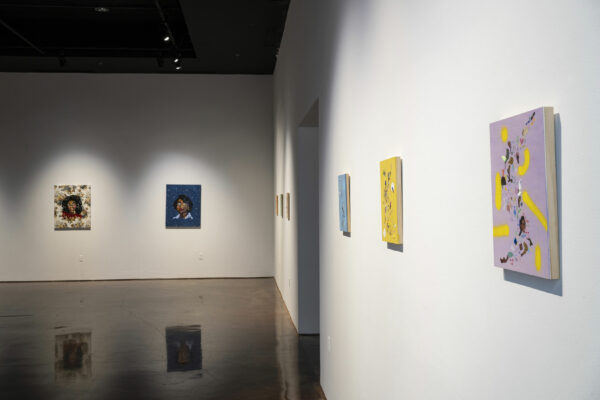 Another work, The Three Sirens (2022), pictures three women holding wine glasses on a mint-green ground behind a trio of alcohol bottles. Above their heads, the advertisement’s caption scrolls by in reverse — a consequence of the transfer process — nearly illegible, although an inquisitive observer with memories of the 1970s might deduce that the image once sold Ebony readers on Champale, a bubbly malt liquor then marketed to Black communities. More strikingly, the artist’s method has left the figures’ faces in a state of deliquescence, their features sliding and puddling. The bright whites of their eyes and teeth have grown comically larger, their red lips rubbed across their faces. Instead of the elegant models of the print ad, they look like caricatures, not too far from the racist stereotypes of minstrelsy.

Despite the accidental incidents of pooled and pulled paint that the squish and peel of the transfer yields, Robinson achieves her effects deliberately. Her carefully calibrated monochrome grounds, the translation of the original photos into a limited number of vivid hues, and the deployment of those colors as flat, delimited areas — the better to highlight the way the colors bleed into one another without mixing — evince the artist’s mastery of the process. The paintings do what she means them to do. 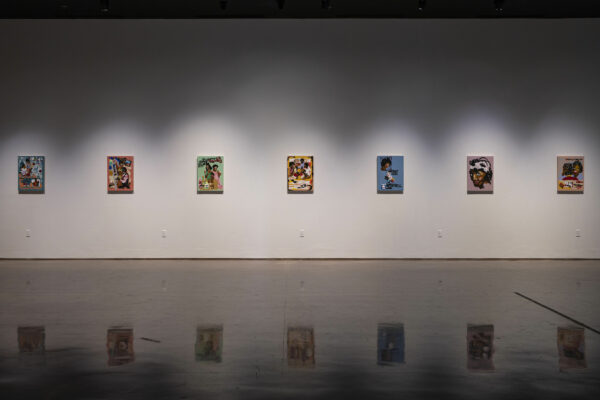 And what they do is to take the comforts and blandishments of corporate visions of the past — the Black past — and transmute them into something disturbing, something off. Robinson passes the security of home life, the transformative potential of beauty regimes, and the sophistication of adult pastimes through the looking glass, and hands them back to us as out-of-focus, transmogrified, curdled cartoon dreams. These paintings appear to embody the warping effects upon us of an idealized history and the way the present never lives up to the expectations of the past.

We should remember that Ebony promulgated a mainstream, bourgeois, and consumerist ideal, what the artist has called “aspirational Blackness,” that many of its readers could never achieve. That the artist mines the most anodyne regions of the Black imaginary to invoke some of the most enduring tropes of racism also lends her investigation a particular, American, and racialized air (and isn’t being American to be always racialized, even when we white subjects refuse to acknowledge it?) and aligns her work with that of other artists with similar interests, such as Kara Walker. Like Walker’s, Robinson’s characters can seem both monstrous and comic; they partake in a mode that the critic Kobena Mercer called “the stereotypical grotesque,” in which the received and pernicious ideas of the past are undermined through the subversions of parody and excess. Yet, just as impressively, Robinson’s paintings manage to appear simultaneously spontaneous and refined, subject to chance and completely under control.

On an adjacent wall in the gallery, four somewhat larger paintings feature portraits of women, again taken from pages in back issues of Ebony. This time, the images copy headshots of models, rendered in the transfer technique on vintage printed fabrics instead of painted panels. In Blush and Determination Gets Her Through the Day (2022), a woman in an ocher Afro looks out from a background of a riotous blue and green hibiscus pattern. Model Takes Country by Storm (2022) portrays a woman with dark wavy ringlets on a traditional floral upholstery fabric. While these portraits display the same process-induced distortions that make it seem that their faces dissolve into a spectral patchwork of molten color under our gaze, Robinson has held the deformations in check so that some of the individuality and beauty of the original sources shines through. Rather than caricatures or grotesques, these women leave us with the impression of holding on to their identity and subjectivity even while subject to corrosive forces, perhaps those of time and objectification. Robinson somehow magically converts these generic images of forgotten models into emblems of resilience and resistance. 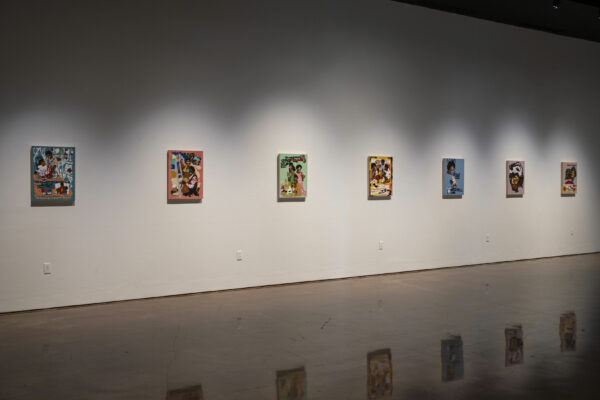 A series of six collage works on panel, unfortunately, don’t pack nearly the punch of the artist’s paintings. In these, she combines heads and other body parts also taken from Black magazines of the later twentieth century with painted daubs, sprays, and delicate drawings, often of flowers, leaves, or eyes with prominent lashes. Sashaying into Summer (2022) even has affixed plastic charms of a dog, a gun, a four-leafed clover, Mickey Mouse, and Jesus. It is difficult to parse how the doodle-like drawing relates to the abstract elements, or those to the photographic fragments, much less to the attached objects, and the whole never resolves into something larger than the sum of its parts. Lacking the visual impact and intellectual coherence of Robinson’s translations of historic advertisements, the collages remain cryptic and pretty. And Women’s Work Vol. 4-01 (2022), a final, singular work of sewn scraps of found fabric (the one with the hibiscus flowers reappears) with one section digitally printed by the artist with an advertising image of a mother’s hands tying a ribbon in a little girl’s hair, her face obscured by an abstraction of four colored circles, fails to make much of an impression at all. 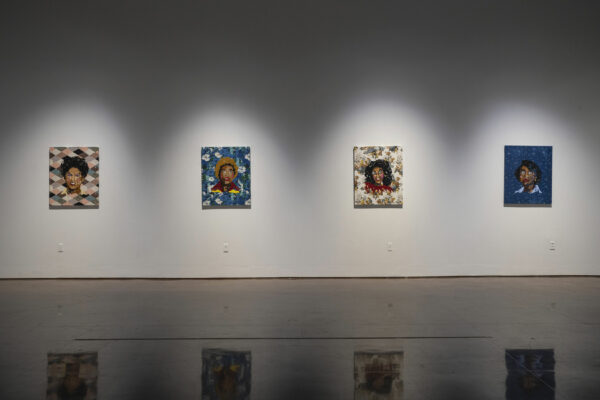 Despite such minor missteps, Robinson’s paintings stand as welcome additions to the current renaissance of figurative painting of all stripes. Instead of merely reproducing photographic imagery in the name of visibility, her panels force us to confront the double-edged sword that is representation itself. In his famous essay “Rhetoric of the Image,” the philosopher Roland Barthes chose an advertising photo as his example with which to explore how photographs produce meaning because of its obvious intentionality. Robinson does the same, recuperating images that would have been formative for her parents’ generation and tweaking them, the better to dissect their continuing repercussions for identity in the present.

Dana Robinson: Just Us Chickens is on view at Texas State Galleries until November 11.

“The Art of Bill Hutson,” a Citywide Exhibition...