In the Studio With Ana Segovia, Austin 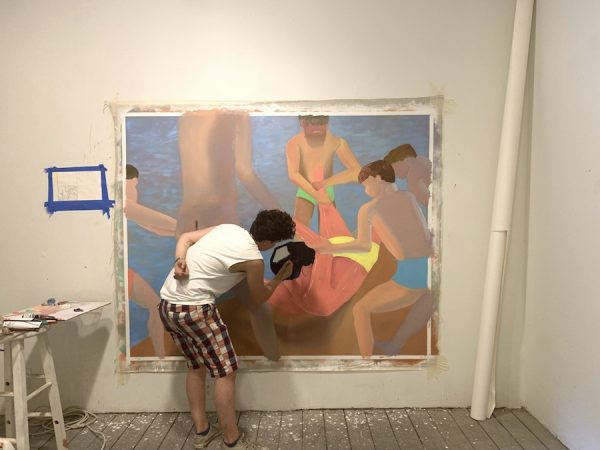 Ana Segovia in her Austin studio for her Unlisted Projects residency. Images by Leslie Moody Castro

Painter Ana Segovia has been in Austin the entire month of July participating in the Unlisted Projects Residency as hosted by the Museum of Human Achievement. Ana is originally from Mexico City, earned her undergraduate degree at the School of the Art Institute of Chicago in 2015 and returned to Mexico City almost three years ago, where we met.

Ana’s practice involves film stills and the movie industry’s proliferation of ideologies such as macho culture and sexism. She pulls a single moment from a movie, notes its awkwardness, then queers it. Her obsession with cowboy culture is what brought her to Austin, and she makes a Glasstire appearance during a my recent research trip to Mexico City with others on the Unlisted Projects board.

Ana has been actively producing in the studio, and specifically pulling reference material from the promotional video for Boys Ranch. Here she sits with me and talks about her practice, the residency, and the future.

Leslie Moody Castro: Why are you excited to be in Austin?

Ana Segovia: I’ve always been attracted to the idea of the American south, but always felt as though it was out of reach to me. The conservatism of the southern states — Texas in particular — made it seem as though I couldn’t feel safe submerging myself and my queerness in that culture.

My only access to the culture had been mediated through mass media: movies, TV, etc. It made it easy to romanticize the cowboy, especially while growing up.

Being in Austin, a liberal and queer-friendly city (at least in the context of the art world, and as far as I can tell as an outsider) is the closest I have gotten to being in that space and coming face to face with its realities. 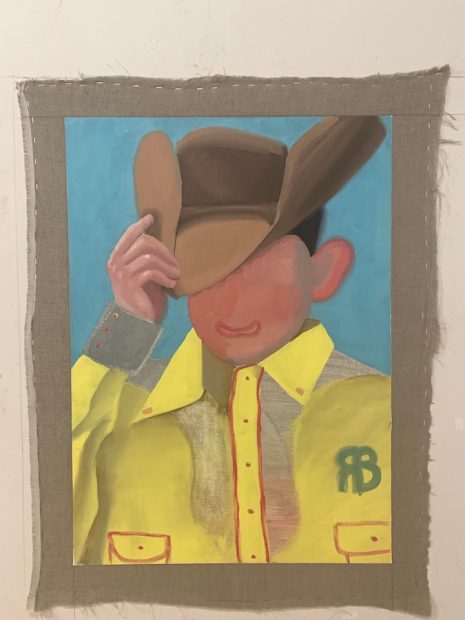 Work in progress by Ana Segovia

LMC: Why do you work from film stills, and tell us a little bit about the stills you have worked on in the past and what you’re working on now in Austin?

AS: Film stills are a wonderful resource for me as a painter who is interested in looking at, then trying to figure out how an identity is constructed and popularized through mass media. The characters portrayed in these films are performing more than just a scripted story — they are performing ideologies that ultimately shape notions of gender, race and sexuality in a culture. Stills are also wonderful in that they hold multiple temporalities in them: the moment the decision to take the picture was made, the moment in the narrative [that] it stills, and the moment we are in as we look at them. The challenge in looking at these images now is to understand them not just as a moment in a scripted narrative that is still, but also as a moment in which all these temporalities come together in an image that congeals ideologies that surpass its particular narrative. They feed from and into the culture they portray and create. That larger narrative is never static but always in motion. My task as a painter is to read all those cues and re-contextualize them in the form of a contemporary painting.

While I am at Unlisted Projects I am dealing with a 1950s promotional video of Boys Ranch, a social project started in the ’30s [in Texas] for young boys who were either orphaned or troubled in some way. The whole video promotes the southern white cowboy as an ideal model for reforming “lost” youth, turning them into “healthy and morally good young men.” Sammie, the protagonist in the video, who is approximately 12 years old, is seen as he transitions from his Oliver Twist-esque identity into an “authentic” Texan cowboy. The challenge in dealing with this video as source material is really trying to show how the videos promote these models of masculinity by highlighting the most compelling images through painting, all the while being sensitive to the fact that most of these boys suffered terrible abuse in the service of manufacturing the ideal white conservative Texan cowboy.

LMC: What have you learned through your time here in terms of your process? What were some (or the one) biggest surprise of coming here to work?

AS: I think that the biggest breakthrough I’ve had during my time in Austin is realizing the wealth of material that can be found in archives beyond popular cinema. As obvious as that might be, I had been so focused on film, and popular fictional film to be precise, that I think I overlooked the idea of research beyond that. If dig deeper into the subjects I am interested in, a whole new possibility of source material opens up and with it the challenge to adapt it to painting in a different way. As I painter I have to adjust the formal aspects of my work according to the source material I’m working on so that it best captures its nature through its articulation. 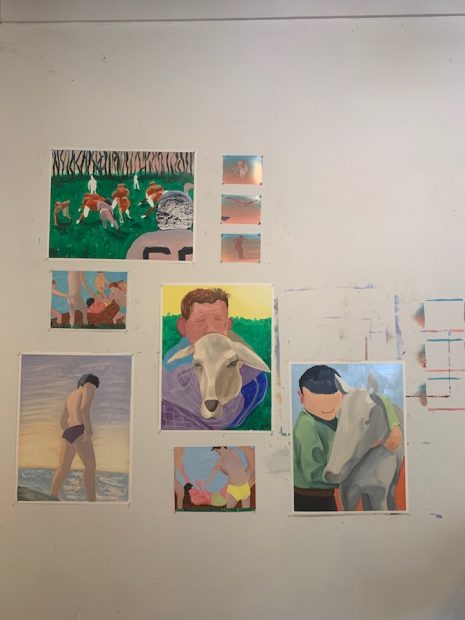 Work in progress by Ana Segovia

LMC: What are some of the takeaways you think will stick with you from this residency?

AS: When you are working on a project, you are really working through it. You are in a process of figuring things out as you are doing them. Being in a new context, a new space, physically but also psychologically, gives you the distance you need to see things from another perspective. Coming to Austin has helped me realize that just taking a step out of your everyday process and pushing yourself to do something different can really shed new light not only on where you’ve been as an artist but where you can go.

LMC: What are you looking forward to when you go back to CDMX?

AS: I will be returning at a really interesting time personally after this residency because I am in the process of moving my studio. After being here for a month and really focusing on one particular project, and putting all my energy into that, I’ve learned how I can use the opportunity of moving into a new studio and a new community to focus on new projects and see where they take me in both formally and conceptually.