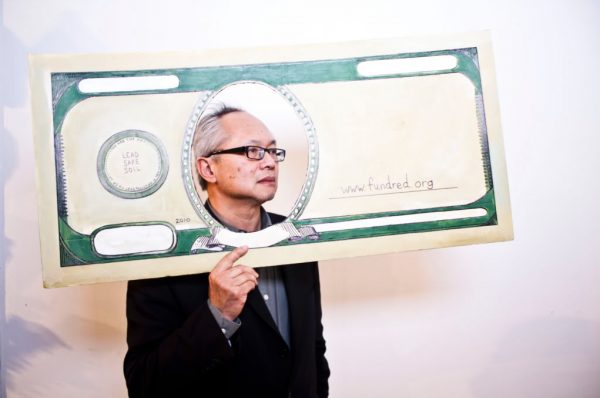 Today, June 8, 2019, from 6-8 PM, Texas artist Mel Chin is wrapping up the current chapter of his 12-year-long Fundred Dollar Bill Project with a closing celebration at the Eaton DC hotel.

Started after the artist visited New Orleans following Hurricane Katrina, the project was a way to give all individuals, and particularly children, a voice in responding to issues of lead contamination in water and living environments. The idea behind the project was simple: individuals across the US would draw and color their own fundred (hundred) dollar bills, which would then be collected, exhibited, and ultimately delivered to Congress, showing that the country’s citizens want money devoted to solving the problem.

The national conversation around lead poisoning became more ubiquitous in 2016, after the Flint water crisis in Flint, Michigan was exposed. An investigation into what happened in Flint is currently underway.

Since its inception, Mr. Chin’s project has taken on various forms: in 2010, an armored truck toured around the US, collecting Fundred Dollar Bills created by school children; in 2014, the project was featured at Grand Rapids’ ArtPrize; and in 2015, the Fundred project partnered with the Art Academy of Cincinnati to address local issues. Throughout this time, the project, and the palettes of Fundred Dollar Bills it created, were exhibited in Ms. Chin’s exhibitions, including his multi-venue homecoming retrospective Rematch in 2015, and the landmark exhibition No Zoning: Artists Engage Houston, organized by Toby Kamps at the Contemporary Arts Museum Houston in 2009.

More recently, the Fundred project has been working in Washington DC to bring about change. In addition to finding different ways to deliver Fundred Dollar Bills to congressional members, the project has connected constituents with their policymakers in an effort to foster ongoing relationships and dialogues about lead poisoning. The project also launched the Fundred Artists of America Program, which seeks to further engage former Fundred artists.

Currently, the project’s staff are advocating for the passage of the Lead-Safe Housing for Kids Act of 2018. To learn more about the Fundred project, please go here.