Cities cling in perpetuity to a hometown boy made good. Mel Chin left Houston in 1983, and was clearly influenced by the time he spent in our diverse, surreal and polluted swampland. Mel Chin: Rematch, is an epic set of exhibitions that originated at the New Orleans Museum of Art; the show’s Houston iteration adds additional work and feted Chin with multiple openings, lectures and discussions.

Like a lot of other Houstonians, Chin is the child of immigrants. He grew up in the largely African American 5th Ward, where his parents ran a grocery store. His family later moved to the suburb of Meyerland but continued to operate the store, where Chin also worked. He came of age in the politically active 1960s and 1970s. 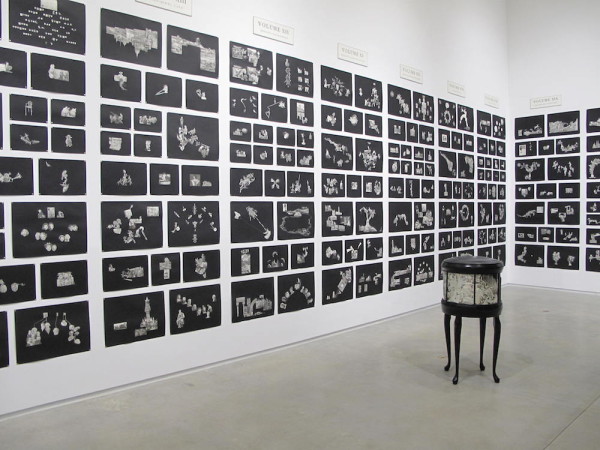 Like his hometown, Chin’s art isn’t easily labeled or defined. His fascinating works range from the 524 delicate collages of The Funk & Wag from A to Z, 2012, cut from a vintage set of encyclopedias (on view at the Blaffer), to large-scale sculptures like Our Strange Flower of Democracy, 2005, a bamboo “bomb” suspended from the ceiling of the Asia Society. It moves from video installations like the 1991 Degrees of Paradise with a ceiling of early video monitors and Kurdish-woven carpets (on view at The Station Museum), to early examples of social practice art in the Revival Field documentation at Blaffer, and to performance artifacts like Lecture Ax (at the CAMH) which contains the artist’s notes for a talk at the New School for Social Research. Organizing a Mel Chin retrospective has to be a daunting task. Curator Miranda Lash perceptively used a viral analogy to describe how Chin’s work evolves as it spreads from idea to idea.

In 1970, Chin organized an ecology club at Bellaire High School. One of its projects was to clear trash out of a small, stagnant section of reeking bayou. (Just imagining it will easily stimulate the gag reflex in Houstonians.) The impulse toward environmental repair reappears in Chin’s Revival Field, documentation of which is on view at the Blaffer Art Museum. For the project, Chin worked with Rufus Chaney, a senior USDA research agronomist. Based on Chaney’s research into phytoremediation, a field of plants known to be accumulators of heavy metals was planted at the Pig’s Eye Landfill, a superfund site in Saint Paul, Minnesota. 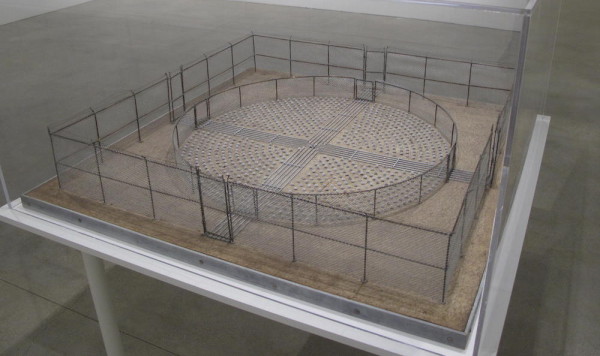 Traditional remediation involves soil being hauled off to a hazardous waste landfill but Chaney believed that plants could be more effective at removing toxins. The various plants were laid out in a pattern designed by Chin that referenced the concentric rings of a target, as well as a circle and square derived from an ancient Chinese conception of a circular sky and a square earth. The artist overlaid the research with additional symbolism, adding plot markers based on the Mayan numerical system, fabricated from redwood, aluminum and stainless steel. Then jars were suspended from the plot markers containing a bar of zinc, lump of lead or ball of copper. (In description, all that symbolism seems a little overwrought, but I never made it out to Pig’s Eye to see for myself.) Chaney continued his research using the plants in the project, which also brought attention to the scientist’s work outside the scientific community. 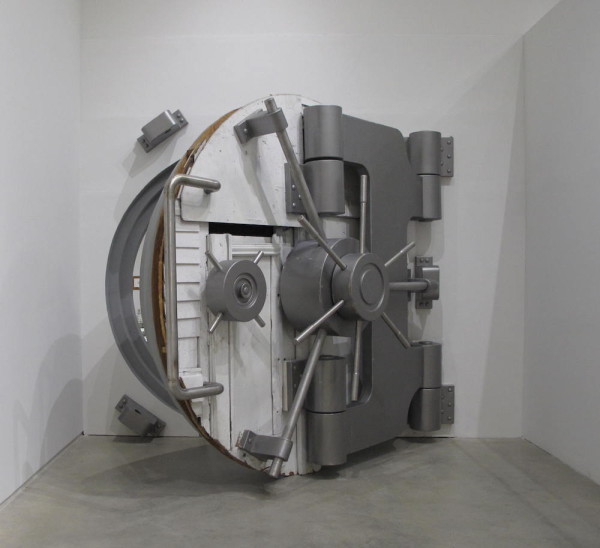 One of Chin’s most iconic works, Operation Paydirt, 2006, is also on view at the Blaffer. It began in post-Katrina New Orleans. High lead levels in children have been linked to violent crime, learning disabilities and lowered IQ. With an estimated 86,000 residential properties in the city contaminated by lead, Chin sought to make people aware of the environmental cause underlying social issues. At the Blaffer, the giant safe door originally mounted on the exterior of a New Orleans shotgun house leads from one gallery into another. Inside the gallery is a massive pallet of hand-drawn “Fundred dollar bills” largely made by children from all over the country. The total count is around half a million. Visitors can add their own contributions on site. Each bill is a symbolic request for lead remediation funding, as well as a mechanism for educating people about the dangers of lead poisoning. 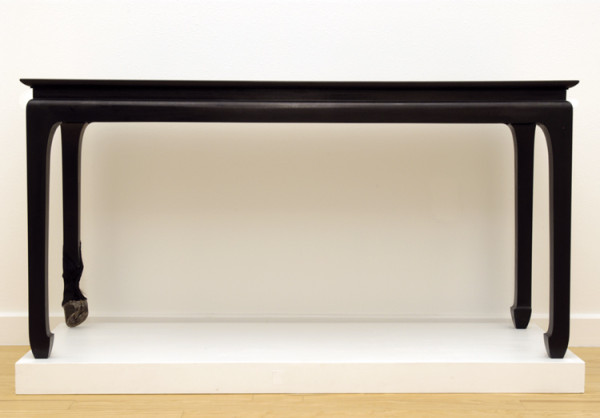 The artworks on view at the Asia Society are relegated to the lobby but include some striking sculptural objects. In 1980, Chin began a stint working as a preparator for Dominique de Menil at the Rice Museum, a precursor to the Menil Collection. While there, he came in direct contact with work from de Menil’s phenomenal collection of surrealist art, an opportunity few art students every have. Surreal moments occur throughout his work. On view at the Asia Society, Chin’s Scholar’s Nightmare, is an elegantly strange object. At first glance, it is a Ming dynasty style table with gracefully curved legs. Then you notice one of the legs ends in a taxidermied horse’s hoof. The perfection of the table is subtly disrupted with something wild and unsettling.

The Contemporary Arts Museum includes a number of pieces Chin created addressing gun violence. In 1981 Houston was the murder capital of the country with 701 homicides. In the exhibition catalogue, Chin states, “My uncle Dick’s murder [WWII veteran Dick Yee Chin] prompted me to relocate of New York City the following year.” Yee was shot at a Houston gas station by a recently released mental patient. In his 1994 work, HOME y Sew 9, Chin repurposed a 9mm GLOCK-17 handgun into a surgical first aid kit for a gunshot victim containing “microelectronic distress beacon on FM band, ACE bandage, saline, narcotic, angiocatheter, epinephrine.” The aid is ironically camouflaged in a weapon favored by everyone from law enforcement to gang members to UN peacekeepers. 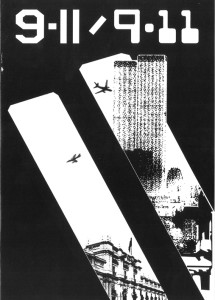 Politics have long been a part of Chin’s work. In what could retrospectively considered an early Houston performance, Chin washed his draft card into pieces. It seems a slower and more meditative choice than the customary burning. While working with Dominique de Menil in the early 80s, Chin also saw the documentary Inside the CIA: On Company Business, the film investigated the CIA’s backing of the Chilean coup d’état. The film would influence the artist’s own 2007 film, 9-11/9-11, also on view at the CAMH. The hand-drawn animated film links two tragedies. The characters of its narrative connect the September 11, 1973 US-backed Chilean coup that overthrew the democratically elected president Salvador Allende and ushered in dictator Augusto Pinochet with the September 11, 2001 terrorist attacks on the World Trade Center. Chin skillfully weaves a story of relationships and politics.

In the film, the artist character takes her boyfriend to see work by Mark Lombardi, the late Houston artist whose intensely investigated drawings diagramed the players of multiple scandals. The Bush family and various Houston enterprises made frequent appearances in Lombardi’s work. Lombardi, whose drawing linking the Bush and Bin Laden family became of interest to the FBI after 9/11, would have appreciated the political connections in Chin’s narrative.

The film was supported by Jim and Ann Harithas of the Station Museum with Ann Harithas as producer. The CAMH presents the final version of the film, in which the drawing is cleaner and color is added. The Station is presenting their favorite version, an early rough cut. There is something beautifully haunting in the restrained sketchiness of the drawings in the earlier version. It’s reminiscent of William Kentridge’s poignant hand-drawn animations but more spare.

Hitting four separate venues to see all 60 works of Rematch is something of a commitment, but it is one worth making. With such varied artistic production, seeing one Chin work is in no way seeing them all. Chin’s fearless approach to any media that serves his purpose is inspirational.

Rematch is on view at the Blaffer Art Museum through March 21, the Asia Society Texas Center and the Contemporary Arts Museum Houston through April 19th. Other Chin works are included in Degrees of Separation at the Station Museum of Contemporary Art through May 1st. There was also a brief show of drawings by Chin at the Art League Houston.

Amazing to see Melvins art after all these years. Very impressive. I met him a couple of times when he was a senior at Bellaire HS. He complimented me on a dragon I drew. Somehow I new it was a compliment that carried weight so it felt good. Bet the portrait he did of Mr Anderson is still hanging there. I should check it out.
http://www.houstonillustrator.com