Why Fyre Festival was the Best Music Festival of All Time 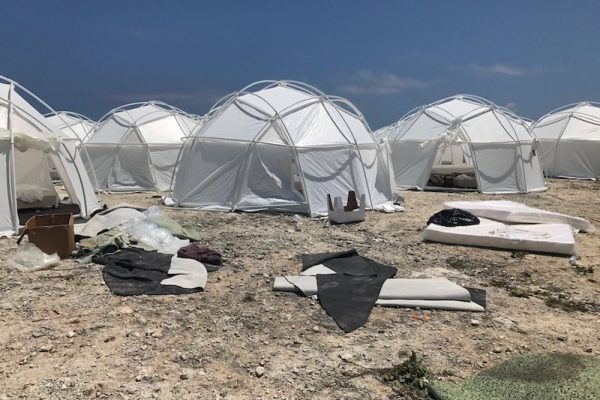 The ‘luxury villas’ of Fyre Festival

On September 16th, 2001, the composer Karlheinz Stockhausen described the attacks of 9/11 as “the greatest work of art that exists for the whole Cosmos.” This statement was unsurprisingly controversial and led to Stockhausen’s cancellation. But what he meant, I think, was that the symbolism of a phallus of western capitalism exploding in a plume of fire was unmatched in history. This was, after all, why Bin-Laden chose to attack the Twin Towers. 9/11, a deathly blow on a sclerotic post-Cold-War empire, is a wound that continues to bleed nearly 20 years later. For westerners, it was the defining act and symbol of the beginning of this century.

The Fyre Festival, obviously not comparable as a tragedy (it’s actually quite funny except for all the hardworking Bahamian people who were totally ripped off), is a fitting symbol for this ghastly age of hyper-normal late capitalism. The elevation of mediocrity, the paucity of imagination, the desire to escape, the vaporous scam of venture capitalism — it’s all here rolled up in the perfect event of vanity and aesthetic vapidity: the dreaded music festival.

If you don’t know what Fyre Festival was, there are now two recent documentaries about it, one on Hulu, one on Netflix, and both are worth watching. Both were compromised by some sketchy involvement by some of the offenders, but these are the broad strokes: a young New Jersey-born entrepreneur named Billy McFarland partnered with the rapper Ja Rule to launch a talent booking app called Fyre, and also a music festival of the same name on an island in the Bahamas. An incredibly successful social media launch led to the festival selling out, but there was no festival. The founders wanted it to happen so quickly that the task was impossible from the outset. McFarland and his cultishly devoted team worked ceaselessly (or at least the team did; McFarland mainly seemed to ride jet skis, guzzle beer, and pace on a balcony) on what was an unsalvageable vision, and there was no way to stave off disaster. The event approached like a melting glacier drifting off the ice shelves of the poles. Ticket buyers, almost exclusively well-off millennials obsessed with the influencer culture of social media (Instagram in particular) arrived at what was meant to be an all-out luxury event only to find half-erected FEMA tents, askew porta-potties, no food or water, no performers, and no way off the island.

Watching the Fyre documentaries and the debacle they depict is akin to freebasing schadenfreude. Everyone involved with the organization of the event (except the Bahamian people) are loathsome, including the generally blameless Fyre app team and the braying venture capitalist who can barely contain his delight that he told you so about the fraud. But beyond this base pleasure, the Fyre saga is so on the nose about the ills of this age as to become a real-life fable.

Billy Mcfarland, who looks as if the fatter member of The Chainsmokers and Joel Osteen were fused together in the machine from The Fly, is routinely and bafflingly described reverentially, at least early in one doc, as “amazing,” a “visionary,” a “genius.” The phrase “the confidence of a mediocre white man” has never been more realized. McFarland’s first endeavor-slash-con, Magnises, essentially created thick, heavy metal cards (like an Amex black card) to replace a millennial’s standard debit card, and came with a bunch of unfounded “rewards” and a New York City “clubhouse” that resembled the common area of a new dorm at a second-rate college. The exclusive offers of Magnises were all fake, an elaborate Ponzi scheme. McFarland in some ways is the apotheosis of post-crash capitalism. There’s nothing actually there, it’s all a grift and a con, and one that is shockingly banal.

This banality extends beyond McFarland and Fyre, and it is endemic in the growth and development of our economy. Go to Austin or Los Angeles or San Francisco or New York and see the same overpriced, order-at-the-counter restaurant called “Jackstraw” on the ground floor of the same mixed-use development. This is progress? Even if Fyre had gone on without a hitch, it would have been no different and no better than a corporate retreat that didn’t completely suck. If your idea of a pinnacle cultural experience is seeing Kendall Jenner and Blink-182 on the same island as a Sandals resort, you are a product (or victim) of an exhausted society that has almost entirely embalmed any life-blood of creative vitality.

The contradiction of Fyre — one that speaks to the contradiction of our modern world — is how much actual work went into this void: thousands of hours by accomplished event producers, programmers, carpenters, restaurateurs, day laborers and more. Many of them were never paid. All for something that was irredeemably mediocre and pointless to begin with. And thus Fyre is the perfect microcosm of one of the most odious aspects of our time, and much of the work we do. This is why it’s the best music festival of all time. It allows you to see the world as it is, instead of just forgetting it for a weekend.