Sticks and Stones: Works by Helen Altman at the Tyler Museum of Art

by Brandon Zech May 19, 2018
FacebookTwitterEmail

Tucked away in the woodsy northeast region of Texas is the Tyler Museum of Art, a small and pleasant space that for the past year or so, under the curatorship of Caleb Bell, has been hosting smart, with-it exhibitions highlighting deserving Texas artists. From helping organize the exhibition of a recently restored mural by John Biggers, to curating a show of paintings by Forth Worth artist Daniel Blagg, to a summertime-themed group show of works by Shannon Cannings, Leigh Merrill, and Kelly O’Connor, Bell has been making an effort to connect Tyler to the Texas art world at large.

The show currently on view at the museum, Sticks and Stones: Works by Helen Altman, is quiet and contemplative, featuring works created by the Fort Worth-based artist throughout her career, particularly from 1992 to today. The show is organized around pieces from Altman’s oeuvre that specifically depict or comment on the various facets of nature as we humans know and experience it: wildlife, domesticated animals, hunting, the outdoors, the fragility of life, and the volatility of fire all come into play in the exhibition. 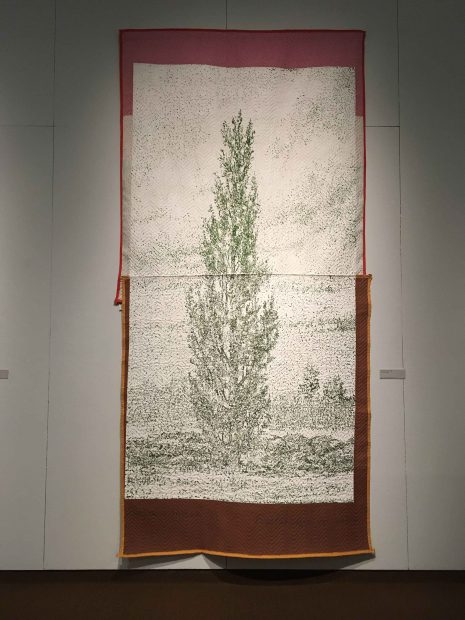 Though Altman’s practice is skills-based and varied, she often returns to subjects and methods she has visited before, while finding ways to change them ever so slightly to make new statements. Her process of working becomes even more clear in a retrospective, when pieces from the early aughts are paired up with works created just last year. One of the best examples of an overt through line in her work is her use of quilting materials and moving blankets. Just inside the entrance to the show, you are met with two large-scale portraits of trees painted in acrylic on premade red and blue moving blankets. The further away from these you move, the more photorealistic they look, until ultimately they appear to be blown-up illustrations from botany books printed directly onto the fabric. 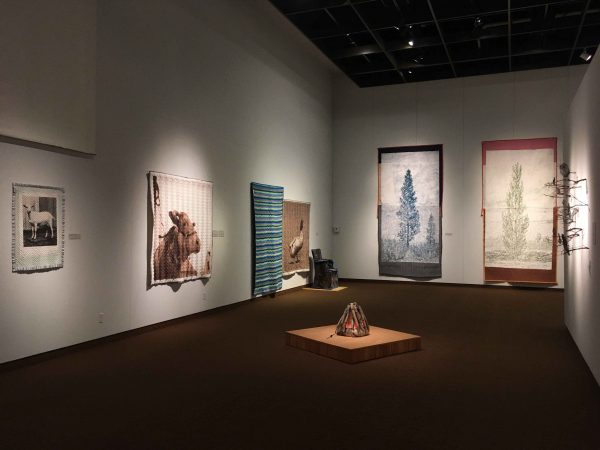 Slightly later blanket pieces take her process further; she removes the painter’s mark entirely by using thermal transfers to imprint actual photos onto the quilted surfaces. For these, instead of foliage, Altman uses animals as her primary subject, applying their image to quilts in order to bring her fauna indoors. In isolation, these works imitate the visual language of moving blankets in their stitching and design, but when paired up with the actual moving blankets elsewhere in the show, we realize these foundational quilts are much more complex and intricate, and draw considerably more on established quilting techniques than their purely utilitarian counterparts. These pieces are made by a quilter Altman works with, and every stitch pattern, fabric choice, and image placement is deliberate. 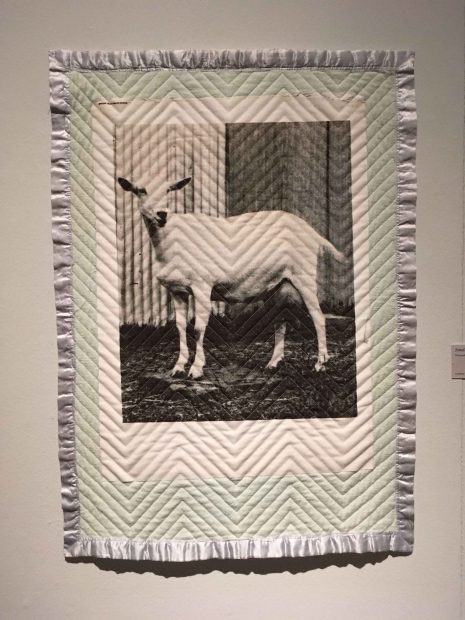 Altman’s most recent blanket pieces are sweeter; they have a charm and a domesticity to them that is absent in her larger-scale works. For these, she uses vintage baby blankets as her base layer. The pieces are more haphazard: the thermal transfers aren’t tightly cropped, and some still have printing information on them. In one piece, an image of a chicken is paired with an impossibly small dress (a doll’s dress), hinting at critiques of domesticity, women’s work, and the fragility of memory and childhood. Many of these newer pieces have a satin-like border around them, bringing their tactility even more into play. 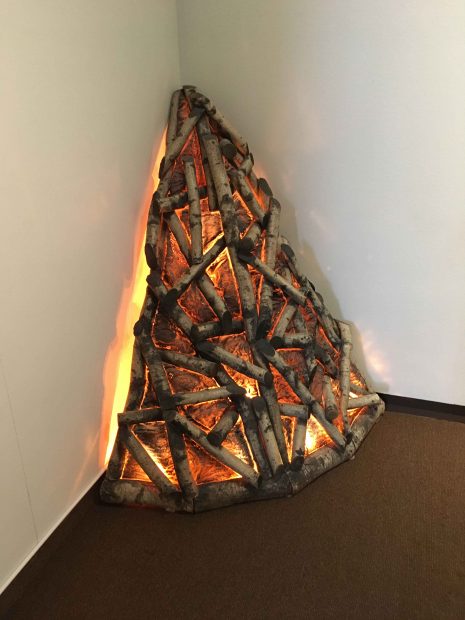 Another of Altman’s hallmarks is toeing the line between perfectly crafted objects and things that are well-made but just slightly off. She writes:

“I am also interested in mimics and replicas. It is a happy moment for me when I can create objects that are simultaneously convincing and yet blatantly absurd in their obvious artificiality.” 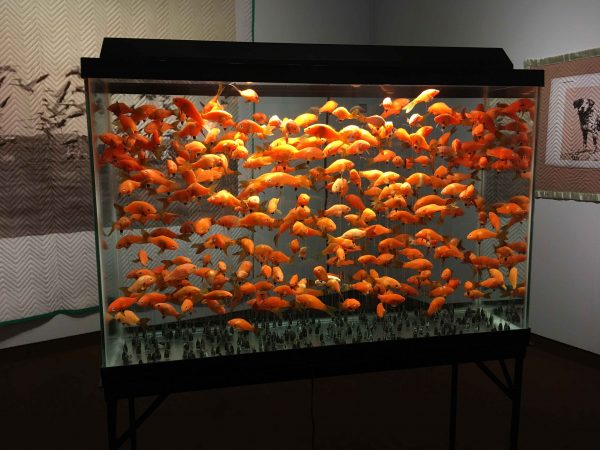 While I appreciate Altman’s blanket pieces, this is where her work really shines — she is a great object maker. An excellent example greets you at the front of the exhibition: Corner Campfire is a flickering piece meant to mimic an indoor (and thus absurd) cornered campfire. Another work in the show, Goldfish, is a 45-gallon tank of distilled water in which dozens of cast plastic fish are held down by lead weights. Altman comedically capitalizes on our fascination with watching fish swim around by cramming a tank full of motionless, gape-mouthed facsimiles of the real thing. 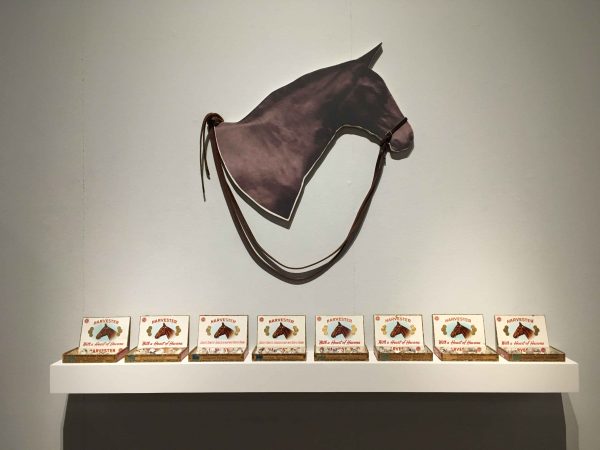 Altman shows off her craftsmanship in a series of works in which she recreates various tableaux of small bird eggs laid out in cigar boxes. Made of cast plaster and wrapped in laser-printed foil, the eggs have an almost uncanny, awe-inspiring delicacy about them. Even better, though the cigar boxes differ from one another slightly, the eggs between boxes are exactly the same, giving the pieces a strange but comfortable uniformity — there’s an order to nature’s chaos. 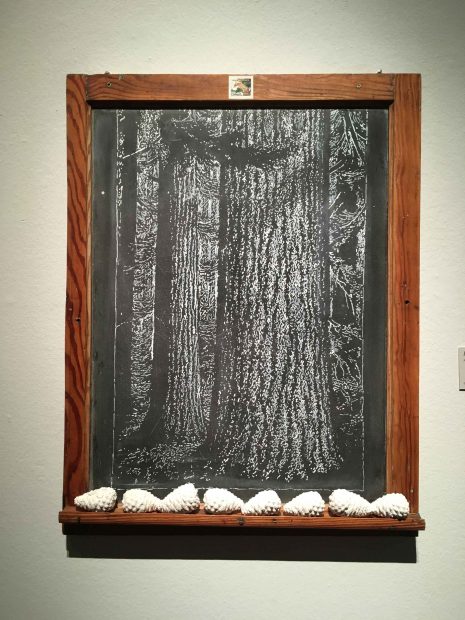 Also included in the show are Altman’s chalkboard pieces, in which she paints on vintage blackboards with acrylic and, in lieu of sticks of chalk, casts various natural elements in plaster that sit on the boards’ ledges. The elements — sticks, pinecones, etc., — are the makeup of the scene; they’re the “chalk” that the actual natural environment itself is created from. And there’s a fragility to these pieces too; the chalkboard images seem like they’re a moment away from being wiped off and lost forever. 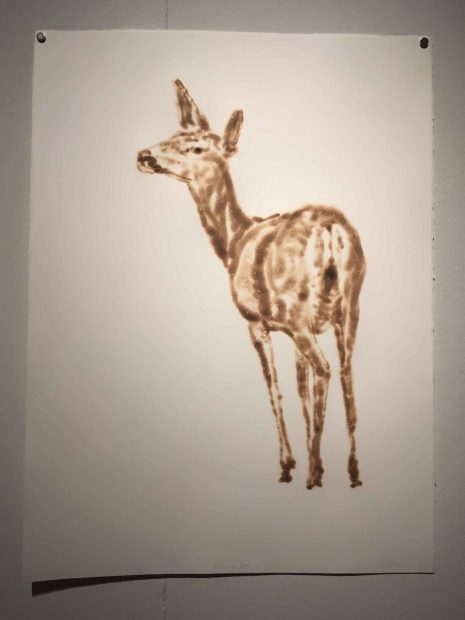 This fatalistic undercurrent runs throughout the entire show, especially when considering all of its elements together: two fires sit ablaze, just waiting to overtake the plethora of plant life that has been so lovingly depicted and categorized. When this happens, the inferno will consume unhatched eggs, beaver dams, and birds perched on limbs. In her torch drawings (pieces Altman makes by soaking paper in water and then scorching it with a blowtorch), Altman shows us the victims already consumed by the blaze: two does. Altman doesn’t let her love of nature blind her to its cruelties. 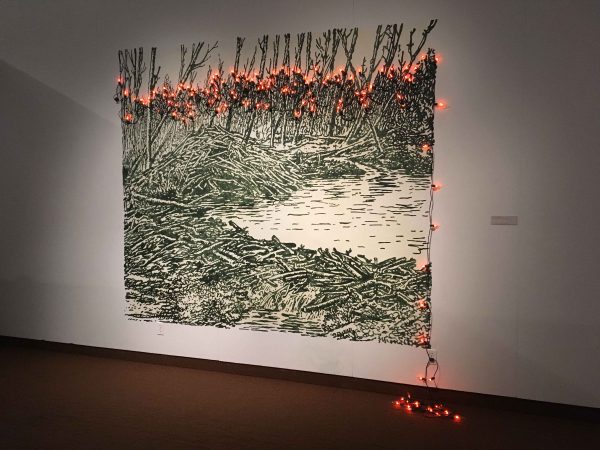 This is the best exhibition of Altman’s work I’ve seen to date, partly because her art works especially well when it’s in dialogue with itself. The exhibition thrives with the inclusion of her goldfish and campfire pieces, as they give her blanket works and wire birds a context that could be otherwise missed by a casual viewer. The show also works so well because it’s smartly installed: there are a lot of pieces in the exhibition, but everything has its place and it doesn’t feel crowded. Wherever you’re standing in the space, be it in the cavernous open room or in the small spaces demarcated by moveable walls, Altman’s various pieces are connected by intuitive sightlines, meaning they inform each other and create new relationships as you traverse the show. This is what every retrospective (large or small) should aim for. 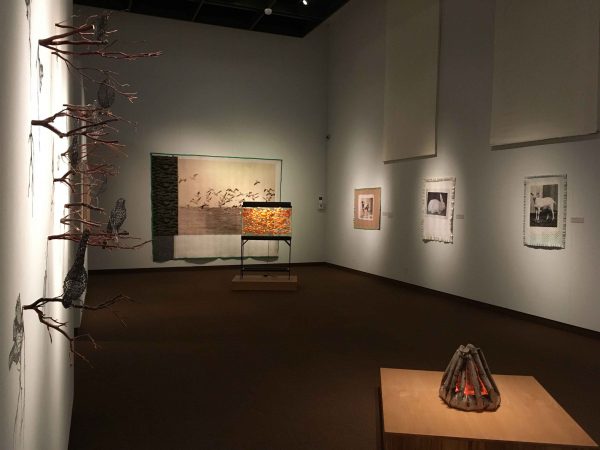 Altman has been due for a large-scale institutional presentation of her work — it’s been a little while since she’s had a big non-profit show in Texas. For me, this one made all of Altman’s practice click into place — to fully appreciate where she is now, I needed to know where she came from. And whether you love her work or not, this show might just change the way you see it.

Sticks and Stones: Works by Helen Altman is on view at the Tyler Museum of Art through June 3, 2018.

I travelled to Tyler from Dallas to see this lovely show. Beautiful and quirky sensibility. Well worth the trip.

Altman doesn’t let her love of nature blind her to its cruelties.

As a kid, my brother and I raised a pair of white ducks. They were probably Easter ducks but when they were grown, my Mom and my brother and I took them to a lake we visited often. We set them free. It was called State Lake for a long time, and later named Lake Lurleen after George Wallace’s wife. I grew up in Alabama after all. And when we went to check on the ducks a week later. We looked and looked. Leaving the lake, I saw them both dead on a trash heap next to the road. “There are our ducks!…and they are both dead!”, I screamed from the back seat. Sorry about the punctuation, I’ve probably gotten it all wrong but to this day, I still see those dead ducks on a trash pile leaving the lake.
Thank you for writing about my show. Caleb Bell deserves all the credit for picking the right works.

oops! It’s “whether” not “weather”. But otherwise a good review.