by Gene Fowler May 7, 2018
FacebookTwitterEmail 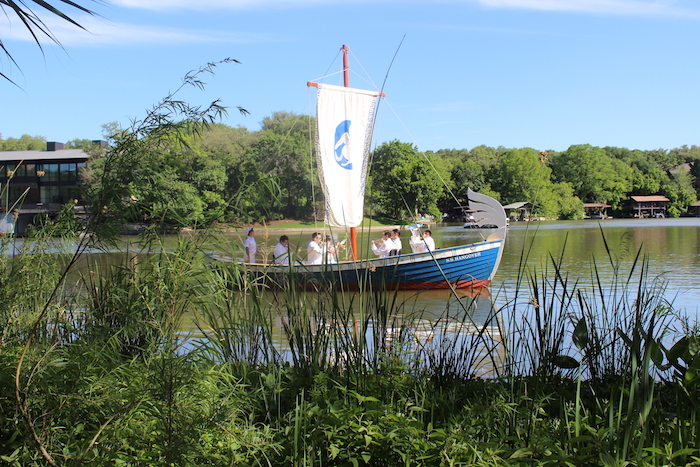 As hour after hour of S. S. Hangover, Ragnar Kjartansson’s charming Fusebox Festival performance, sailed on across the placid lagoon at The Contemporary Austin at Laguna Gloria, I couldn’t help musing about the somewhat random yet enduring history of endurance performance art.

Sometimes called durational performance, the two main elements of the work are typically a ritualized action or situation and the passage of time. In many cases, the gesture or act involves some form of deprivation or extreme behavior. Charting the beginnings of such work is a murky affair, at best. But consider, as a non-beginning, Chris Burden’s 1971 master’s thesis performance at the University of California at Irvine, in which the young artist remained in a school locker for 120 hours. As the performance began, a full five gallon water bottle was placed above him, an empty five gallon bottle below him.

Linda Montano began making endurance work around the same time in California. In 1973, she was handcuffed for three days to Tom Marioni, whom she described as the “king” of the San Francisco conceptual art scene. A decade later, in Rope Piece, she and Tehching Hsieh remained tied together with an eight-foot rope for a year. In 2014, at the age of 72, she performed in Austin for seven hours a day over three days, singing the Psalms costumed as Mother Theresa on a 14-foot lift.

Tehching Hsieh, whom Montano described as “the reigning guru of endurance” at the time of their collaboration, specialized in one-year pieces. The Taiwanese native, who immigrated to the States in 1974, punched in at a worker’s time clock every hour, 24 hours a day, for a year. He lived outside for a year. He lived in a cage for a year. In 1986 he devised a Thirteen Year Plan in which he would make art and not show it publicly. His final art report, issued on January 1, 2000, announced simply: “I kept myself alive. I passed the December 31, 1999.”

The recent-ish mainstream media blob of attention to Marina Abramović’s practice reveals the unfortunate pall of cheesiness that can afflict this work of catharsis and transcendence when it stumbles into the squawking terror of pop culture’s glare. The 700 hours she sat and stared into people’s faces in The Artist Is Present were monumental and publicly intimate, but the gawky arc of the piece as it was blabberhooed into our Big Fat Tabloid Culture colored the show a little creepy. It made me long for the quiet power and beauty I can imagine through the accounts of her 1988 separation performance, The Lovers: The Great Wall Walk, with her performance and life partner of 12 years, Ulay. For 90 days, the two walked toward each other, starting from opposite ends of The Great Wall of China. When they met at Er Lang Shan, in Shen Mu, Shaanxi province, they embraced and then parted forever. Or at least until Abramović’s MoMA retrospective and marathon gaze. 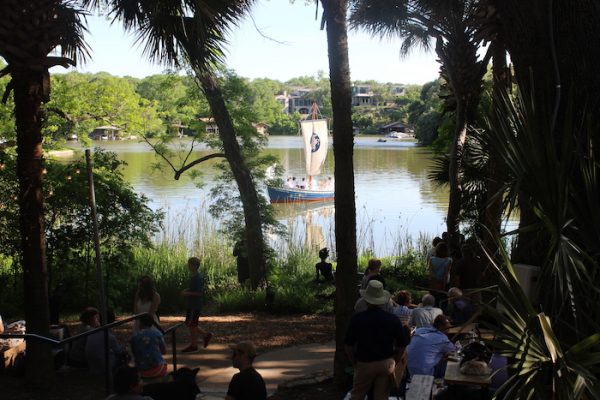 Down here in the cactus patch, I first became aware of the distinctive endurance work of Icelandic artist Ragnar Kjartansson (b. 1976) in 2013 when artbook.com posted a note about MoMA PS1’s presentation of the six-hour video of his project entitled A Lot of Sorrow. The video documented a performance, arranged by the artist, of the American rock band The National performing its song Sorrow repeatedly in a six-hour loop. “By stretching a single pop song into a day-long tour de force,” the site observed, “the artist continues his explorations into the potential of repetitive performance to produce sculptural presence within sound.” I found that notion enthralling, especially after I posted the item on FB and a cranky friend snorted, “For me, overly self-indulgent journalistic doo-dah to laud this ‘artist!’”

By 2016, as Calvin Tompkins observed in a New Yorker profile, Kjartansson had become “one of the busiest artists on the planet” with ongoing presentations on multiple continents of work that is “based on repetition and duration, not storytelling, [and] could be seen as an attempt to bridge the gap between performance art and traditional theatre.”

In contrast to Burden’s master’s thesis locker action, Kjartansson’s 2001 art-school graduation piece was a grandiose fluffoofery entitled The Opera. He “converted a small storage room into a rococo theatre,” writes Tompkins, “with pink walls and fake eighteenth-century furniture, and for ten days, in a powdered white wig and an eighteenth-century costume, he sang made-up, Italian-sounding arias for five hours a day. The piece was funny, touching, ridiculous, and beautiful — all the things art students learned to avoid.”

John Baldessari came to lecture at the school while Ragnar was a student. When Kjartansson told Baldessari that he admired the fact that the West Coast conceptualist had burned all his early-career paintings, Baldessari replied, “You really should work in advertising.” And so he did, taking a job with a Reykjavik agency, for four years.

In 2007, Kjartansson had the opportunity to perform at Bard College in Duchess County, New York. For his piece Folksong he played two electric guitar chords for six hours a day. Bard trustee and partner in Luhring Augustine Gallery, Roland Augustine, told Tompkins, “There was this existential crisis in what he was doing, and it really hit me… . It was like Samuel Beckett, somehow.”

At the 2011 Venice Biennale, Kjartansson presented Bliss, in which a small orchestra and ten opera singers repeated the final aria of Mozart’s The Marriage of Figaro for twelve hours… .

In 2016, for his Woman In E , presented at the Museum of Contemporary Art Detroit and the Hirshorn in D.C., a succession of ladies in gold lamé gowns stood on a slowly rotating pedestal and played an E-minor chord on an electric guitar for more than two hours apiece. “It’s gonna be mind-blowingly boring sometimes,” Kjartansson joked during rehearsals. (But NPR reported that, rather than boring, the performance was mind-blowingly emotional… .)

Earlier this year, for his work The Sky in a Room at the National Museum of Wales, a succession of organists sat at what Kjartansson called “one kick-ass rococo organ” for several weeks. Each played and sang for hours at a time the song Il Cielo in Una Stanza, or The Sky in a Room, written by Italian composer Gino Paoli and a 1959 pop hit for teen singer Mina… . 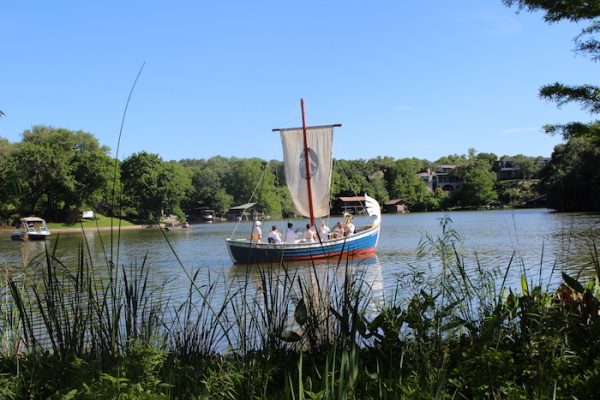 At the Contemporary Austin at Laguna Gloria, the duration was slimmed down to four hours for each of the eight performances. In a podcast phone discussion with Andrea Mellard, the Contemporary Austin’s Director of Programming and Community Engagement, and Fusebox Festival Curator Anna Gallagher-Ross, Kjartansson explained that the piece was first inspired by a desire to do something with the romantic waters of the floating city, and then, somehow, by material in the book Hollywood Cocktails and the 1935 film Remember Last Night?, which was based on the novel The Hangover Murders.

An Icelandic fishing boat built in 1934 and long out of use was found near the artist’s Reykjavik studio and then rebuilt and painted at his “mysterious” father-in-law’s shipyard. It was built the ancient Viking way, Kjartansson explained, and in its new life became “a sculptural performative piece” or a “work of kinetic sculpture.” The piece needed brass instruments, he added, that would repeatedly play a short composition of lamentation by a collaborator, Kjartan Sveinsson, and acoustics would change as the vessel sailed around the performance space. The plump image of Pegasus on the boat’s sail was intended to represent the mediocre artist trying to fly, unlike “Mozart and the other slender Pegasuses.” 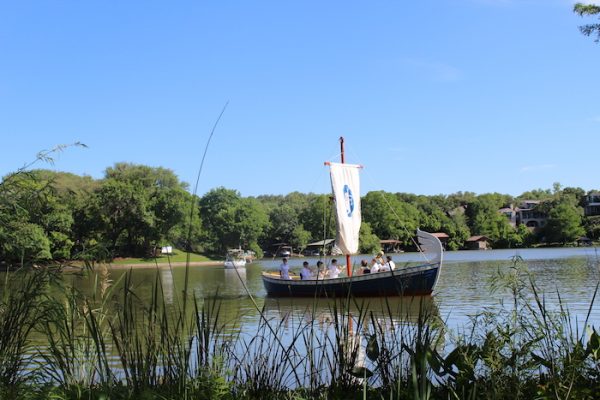 The successive sextets of brass players — trombone, two flugelhorns, two French horns, and a tuba — were recruited from Austin’s contemporary chamber orchestra collective Density512. Dressed in white for the warm April weather, they were joined by the Hangover captain, who steered the Nordic craft and repeatedly dropped and weighed anchor. The music wafting across the lagoon to the relaxed crowd lolling around the museum’s amphitheater was a soothing drone that moved into soft swells and subdued, minimal flourishes that winked and hinted at fragments of narrative. A thousand stories, hanging in the very air. The elegiac micro-melody throbbed in slowest motion, like sonic honey seeping across the atmosphere.

As I imagine so many of Kjartansson’s works must, the piece worked upon the psyche as a chant, but it was a chant with a hum that whispered the rhythms of bone.

Asked about the role of music in his work, the artist explained that he had wanted to be a musician but always felt that he was something else. “I went to art school because I felt that was the best way to be like David Bowie or the Rolling Stones,” he said. “It’s like European musicians come from art school – European music is always art school stuff, but American stuff comes from the soil.”

The podcast is a little hard to hear. It’s possible that Kjartansson could have said American stuff comes from the “soul,” but I heard “soil.” I fancy both. From the continually alarming department of noticing that one is not paying sufficient attention to the universe, I see that Kjartansson came to Austin in 2011 to make a video piece about Pinetop Perkins for the Arthouse at the Jones Center. Note to museums and festival presenters: Someone please bring to the cactus patch Kjartansson’s nine-screen video work The Visitors.

Ragnar Kjartansson’s ‘S.S. Hangover’ was presented at The Contemporary Austin at Laguna Gloria from April 7 to May 6, 2018.