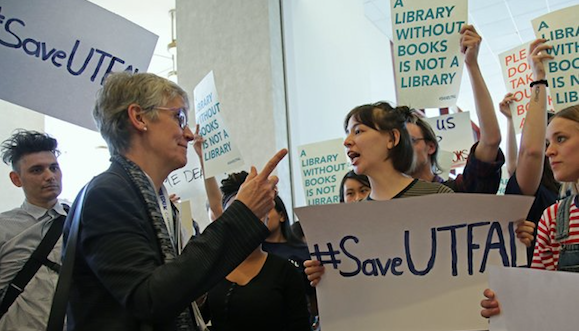 The opening paragraph of a December Glasstire article reads:

The University of Texas at Austin recently announced that, under Douglas Dempster, dean of the College of Fine Arts, it has and will move tens of thousands of fine art books, collection materials, periodicals, and music scores from UT Fine Arts Library, or FAL, into off-site warehouse space, in order to update the library’s use to better “meet the demands of these students and faculty,” as “Circulation has crashed.”

But the Daily Texan quotes a student stating yesterday, “Just because we’re not checking them out does not mean we’re not using them,”

Maria Mendez of the Texan covered yesterday’s protest of about 50 UT students and faculty members as they protested the removal of materials from the Fine Arts Library at SXSW EDU. Members of the group Save UT Libraries picketed outside a talk by Douglas Dempster for the local education conference.

“Many university libraries across the U.S. are also storing or recycling more materials, according to a February Associated Press story,” writes Mendez. “Of public Texas universities, UT saw the most dramatic decrease from 1.9 million materials in 2007 to about 242,500 last December, according to the Houston Chronicle.”

Protesters have already held an old-fashioned letter writing campaign, and the deadline for concerned students to voice their concerns to the task forces via email is March 21.

Write a Letter This Sunday to Help Save...

UPDATE: The Fate of the UT Fine Arts...

The university claims that there will be a 3-day turnaround for requested off-site materials. However, as a UT student who has tried using this service before, I sometimes have to wait longer than 3 days before the materials actually arrive on-campus.

The removal of materials from the fine arts library is not just about access to books- it is about the university prioritizing the new School of Design and Creative Technologies over its existing fine arts programs and research. The College of Fine Arts should not be pushing these new programs (Design and Arts and Entertainment Technologies) if it requires taking away student resources in order to make space.

Yes, many universities have delivery for volumes stored offsite, but those are usually, rarely used, redundant, or items removed from circulation because of condition. Here, the reduction has meant the atrophy of our library in a very different manner, e.g., at present, we have only five remaining journals in our library, and those are there only because of faculty intervention. Many, if not the majority, of these journals have not been digitized. Art Historians need old journals (as well as older exhibition catalogs and monographs) in order to do historiography, in order to trace the circulation and transformation of ideas. Call me daft, but I do not think it should take me three day or more to check a footnote at a research university! This is not merely about modernizing–this is a matter of hobbling several existing programs in order to make space for a new program. The previous reduction of the library was enacted without consulting the students and faculty that use the library regarding their needs. Now, caught out, the administration puts on what amounts to a theater of engagement, all while what is left out our once brilliant Fine Arts Library faces the existential threat of possibly being closed entirely.

To add to Rachel’s point, books are being destroyed. They are not just going “off-site,” which can mean the Austin suburbs or 100 miles away. Books are being shredded and recycled. Those decisions are being made based on frankly bogus usage stats. No effort is being made to let the subject matter experts (ie faculty) have input.

As an alumnus of this big fat institution of higher education who uses the art library quite frequently, this is horrifying and infuriating. Many of the volumes I check out of the library are titles that I happen across while searching for one I’ve looked up in the catalog. I find some of the things that interest me most that way…..Also quite disappointed that the library no longer has a shelf for new books.

Nonsense, everyone knows, in art, it is STILL all about the book.