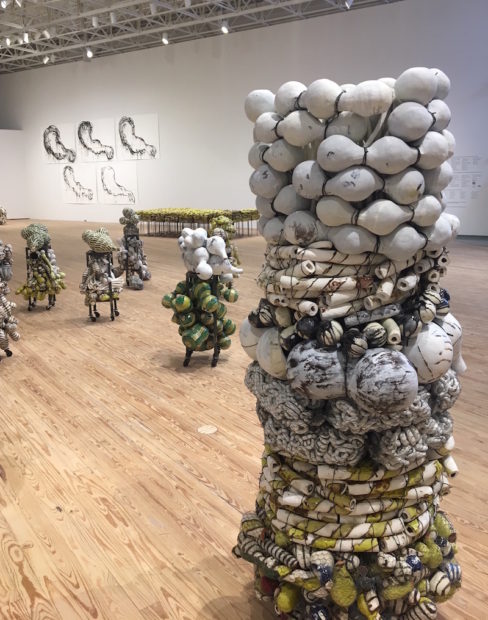 The wall text says “she pushes the medium beyond spectacle and into conversations about endurance-based performances, feminist thought, contemporary painting, and conceptual art.” But with Annabeth Rosen’s solo show Fired, Broken, Gathered, Heaped—currently on view at the Contemporary Arts Museum Houston—we glean this information without the text assist. That’s because the work, while remaining almost wholly abstract, clearly conveys notions of the female body, of labor, domesticity, compartmentalization, and mechanization.

The rich and cumulative layers of ceramics abundant in this show read like turbulent bodies packaged and disseminated: Oozing, gleaming, sliding; bounded, restrained, ensnared; trudging, marching, revealing. Although the bulk of Rosen’s work exists as “sculpture,” you can read these more as three-dimensional paintings because, as viewers, our way into the work — to fully engage in these fruitful conversations around feminism, labor, and the body, among others — is through Rosen’s voracious exercises in mark-making. 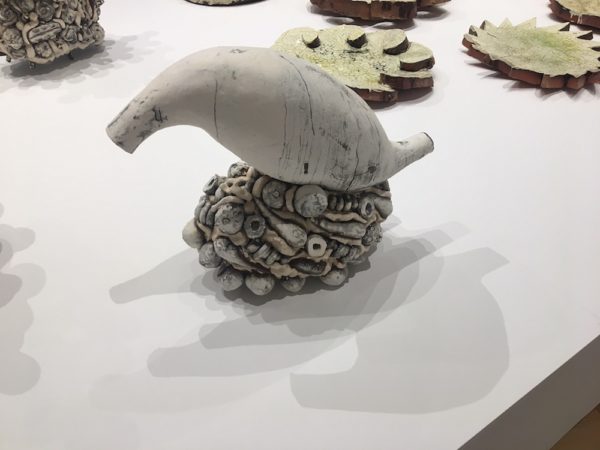 Louise Bourgeoisian bulbous forms populate much of this work, particularly in her free-standing “mashups” in the center of the gallery. But there’s also a Guston-esque quality to a lot of it, particularly the almost cartoony way fatty flesh-like layers splooge out of her “mounds” series. In these two cases, the harkening to Bourgeois and Guston remain separate, but other times they intertwine, like many of the mashups displayed on the low-lying platform off to the left. In a dance of eroticism and abjection, Untitled #45 (Little Pink) emerges like a mushroom outgrowth of breasts and orifices mired in intestinal worms, while Untitled #38 reads like a severed stomach perched atop a pile of squirmy shapes echoing bolts and sea coral. 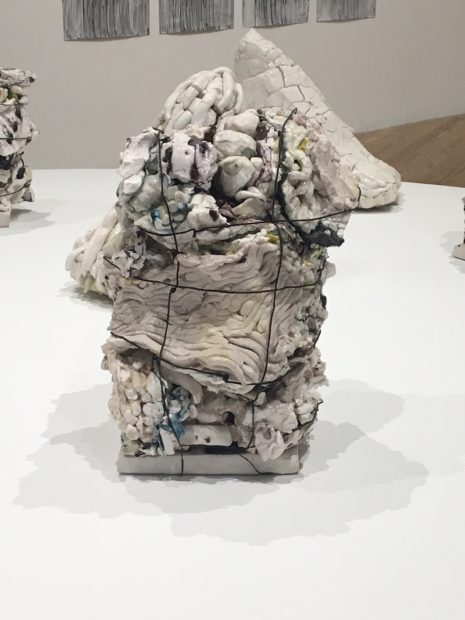 But although Untitled #38 is the closest Fired, Broken, Gathered, Heaped comes to a kind of literal figuration, Rosen also literally binds much of her work with varying degrees of success. Two materials she uses here for binding, steel baling wire and rubber inner tubes, yield massively different formal results. The steel baling wire — thin, wavering, vulnerable — works best as a stand-in painting technique because the line quality, at once resolute and wonky, refers to a form of entrapment without dominating your eye movement and overtaking the rest of the work. The inner tubes, on the other hand, have our eyes darting linearly across the work, serving as a distraction  from letting our eyes fall into the various bulbous forms, ruddy colors, and putrid glazes piled on each other. As a sculptural strategy it fails: the rubber materially clashes with the ceramic, reading more as a mere tool to bind the sculpture together, rather than being inherently part of it. It’s a heavy-handed conceptual move, and there’s no greater enemy of Rosen’s work than the literal.

This isn’t to say Rosen’s works lack sculptural integrity, or don’t require close attention and consideration as sculptures in their own right. It is more that they perform the idea of sculpture only when in relation to one another — particularly in groupings, and more particularly in how those groupings interact with one another in the exhibition’s full installation. The way these works perform sculpturally lies less with Rosen’s decisions as the artist and more Valerie Cassel Oliver’s curatorial decisions.

Cassel Oliver’s curation is pure magic between the grouping of the centrally located free-standing mashups and the work titled Sample. Each sculpture — or piles of objects comprising a larger object — reside on its own wheeling cart, and taken together they suggest movement as a slumping, sea-shanty herd carrying bags of loot or detritus. Cassel Oliver has arranged them together but in slight disarray, so that not one is aligned in a row or column. She oriented their wheels vaguely in line with the gallery floor’s woodgrain, but askew enough for us to read them more as listless vagabonds than a forward-marching army. 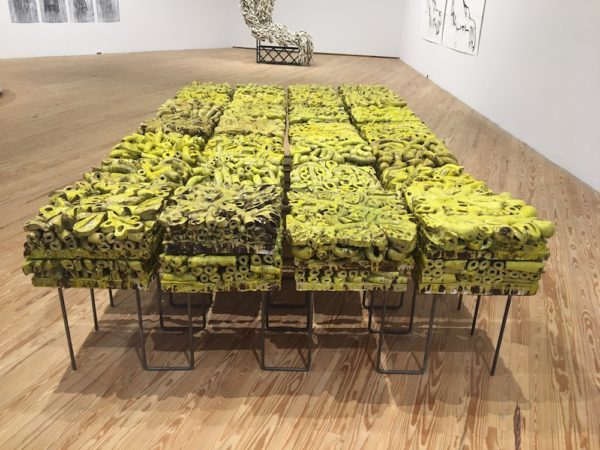 Sample is diagonally off to the right, and stands in sharp contrast to the mounds, like some kind of macaroni casserole platoon. Cut into square slices of twenty-eight, Rosen devised a metal apparatus connecting them into seven groups of four. Tightly packed in perfectly even lines, Cassel Oliver has oriented the seven lines of four towards the same space we would envision the mounds heading, resulting in an inevitable clash or battle. 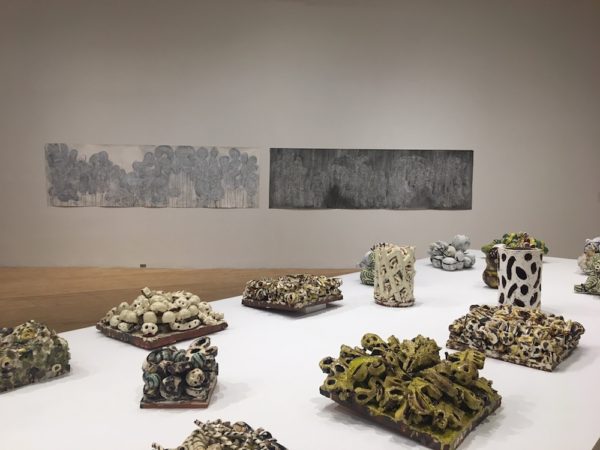 Cassel Oliver has also included in the survey several works on paper designed to provide context and insight into Rosen’s sculptural process. But the drawings are not particularly interesting in comparison to the ceramics, they don’t feel like they serve as studies for the sculptures, and they don’t provide context inasmuch as they gesturally mimic some of the work. The problem with the gestural quality of the works on paper is that the ceramic sculptures already display that gestural quality, and again, they do it better. So the drawings read more as wall filler. This somewhat undermines the confidence both curator and artist exhibit through the sculptures. They also muddy up the stark white wall space, which could provide a fabulous contrast with the muddied yet colorful dynamism occurring with the sculptures.

Annabeth Rosen exhibit is a Houston must see……