The Moral Impetus of Tove Jansson 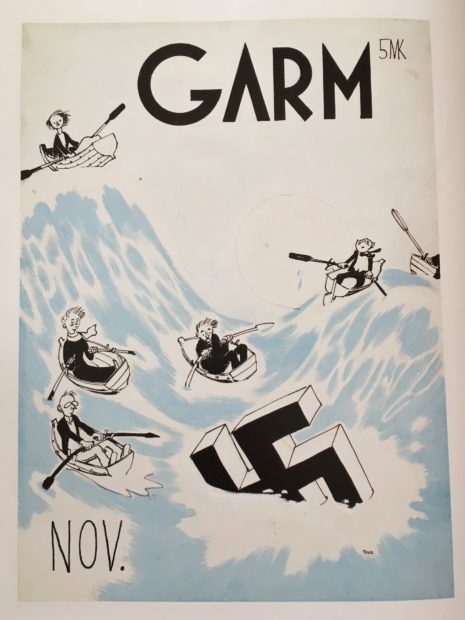 Tove Jansson famously lived on an island. Aside from the practicality of keeping fans and critics at bay, this pragmatically suited the artist’s notions of freedom. No outsiders! World-building is a lonely business, and the Swedish-speaking Finnish icon gave our 20th century a universe that, in Europe (at least), nips at the heels of Hergé’s Tintin. Her Moomin trolls are decidedly more inclusive than their creator; children’s lore like Moominsummer Madness and The Moomins and the Great Flood teem with feminist ideology and anti-authoritarian jabs. The good news: It made her serious dough. What is less straightforward is how this militantly anti-fascist storyteller came to write and illustrate six strictly censored cartoon strips a week for London’s Evening News after having the sand to portray dictators and despots as infantile for Garm magazine back at home, where, not-so safe and sound, Jansson did her most interesting work.

Introduced to Garm by her mother, an illustrator with the pen name Ham Jansson, Tove sharpened her knack for critique at Finland’s favorite Swedish-language satirical culture magazine. Founded and overseen by Henry Rein, the magazine took its name from Garmr, the black hellhound found in Scandinavian mythology. Jansson’s father, also an artist, designed the mascot — less a fearsome underworld creature than bite-y black bulldog pup. Tove followed in 1929 at 15, working to help her family pay the rent while she finished art and design studies in Stockholm. Later, her work would be featured in every issue, including more than one hundred covers during her time at Garm. A fervent pacifist, Jansson spent her hours designing a plethora of biting anti-Nazi imagery — ever engaging threats of doom — that could have cost her her life. 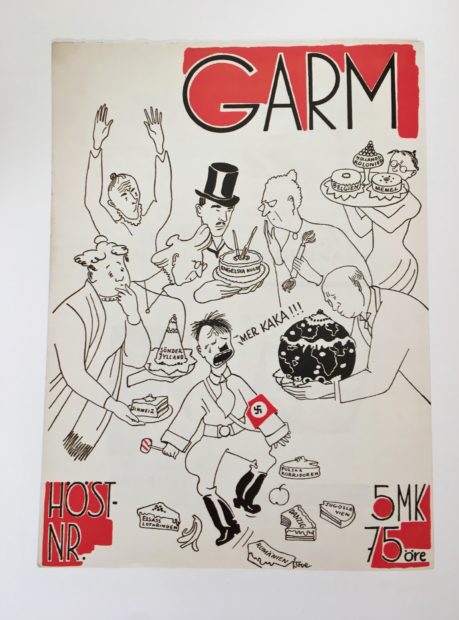 Jansson published under her own name, often free to push narratives not shared by the establishment or at the (relatively) conservative culture mag she worked for. Never afraid to candidly capture suffering via the lens of pop-culture vernacular, the artist witnessed both world wars; bomb shelters were a part of her life from childhood into adulthood. Angels appear on battlefields. Reindeer prepare to rain TNT. An effete, undersized Hitler cries instead of eating slices of cake. Jansson even impugns Stalin’s manhood with an oversized scabbard/undersized sword joke, for the cover. In 1941, her Garm heyday, the artist was nominated for ‘most humorous draughtsperson’ in the Nordic countries, never afraid to bring the pain. 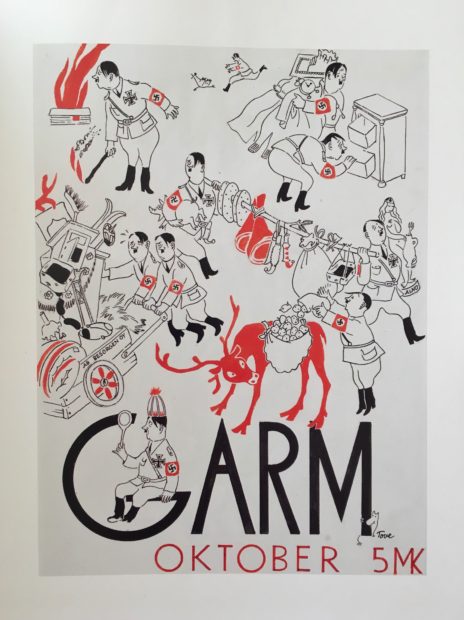 This indulgence in Tove Jansson’s moralist proliferation accounts for the artist’s subsequently shaggy beginnings as a cartoonist at the Evening News in London. Baring a toothy talent eager to bite off more than she could chew, Jansson’s panels initially lacked the conciseness and cohesion they would come to embody. Prioritization of narrative would come in time too. In spite of a ban by editors on subjects like sex, death and the royal family, Tove tore into the gig with Garmr-ish appetite. The strip sold to 40 countries for a readership of 20 million, one day off per week, for seven years.

The rest is history. Jansson’s Moomin trolls are considered some of the all-time best Nordic cultural exports, bourgeoisie be damned — delightfully woke and subversively matriarchal, the outspoken artist found a way to rot the system from within. Relative to her earlier politically charged work, however, it feels like a come down from the artist’s often dazzlingly intricate scenarios and characterizations that were never afraid to devastate. Political cartoons now scramble to catch the absurdity of our government’s state. Panelists like Mike Luckovich cover the mundane in grit, leaving the reader feeling dirty and dissatisfied. Though little is now known about Garm and its aims over its 30 years of existence, particularly in the States, there’s a nice summation in Jansson’s first editorial advice:

Do as you like. Just make sure you hit them in the mouth.

I saw Art, Love & Moomins at the GL Strand in Copenhagen, though it will soon depart for the Dulwich Picture Gallery in South London. Perhaps now estate handlers are looking to boost Moomin visibility and their bottom line, but the results were still slick as hell. From illustrations accompanying Norwegian editions of The Hobbit, to full-blown screening rooms projecting Moomin cartoons in English, and culminating in a top floor “forest” where audiences could draw their own Moomin characters on walls and pillars with color pencils hanging from the ceiling, the retrospective is a blue-chip show that demonstrates how to cater to four quadrants with maximum impact. 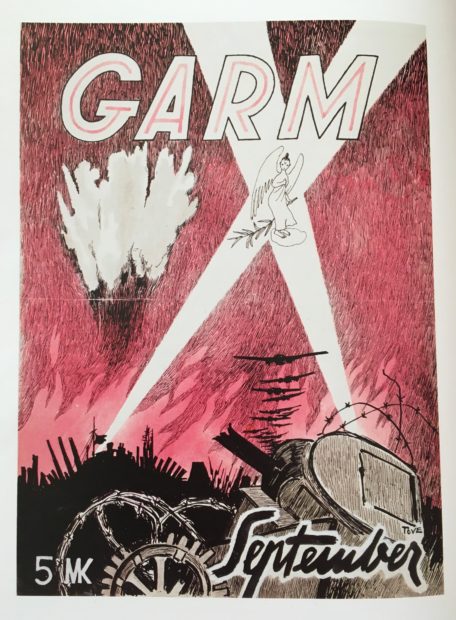 The narrative Art, Love & Moomins paints, however, holds more troublesome ties to facts. It presents a talent who honed herself from impressionist painter to left-leaning cartoonist, an altruistic scion who used her skill-set for broad social betterment. In truth, Tove Jansson never stopped wanting to be taken seriously as a painter and artist, even frustratedly dabbling in post-war abstraction (which never suited her storyteller approach) and composing adult-oriented novels.

What is art’s role in rebellion? Can it empower insurgence free from market constraints? Do culture magazines do it better? Why Tove Jansson is so important a reference for aspiring artists is basic: Hers’ is a story of work ethic. You have to build more than just a fog of ethos if you want to get that island.

What I liked best was being beastly to Stalin and Hitler! –Tove Jansson 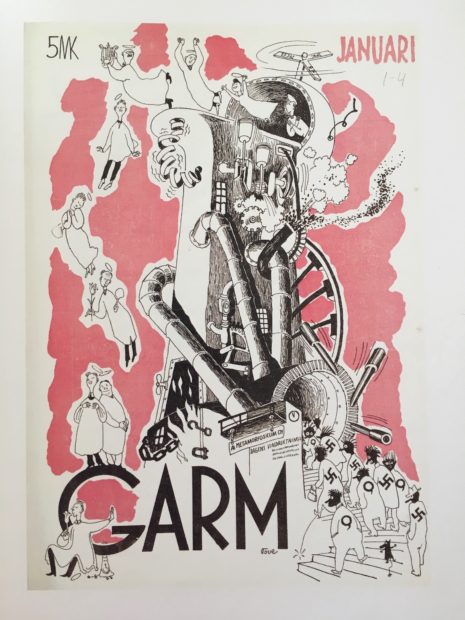