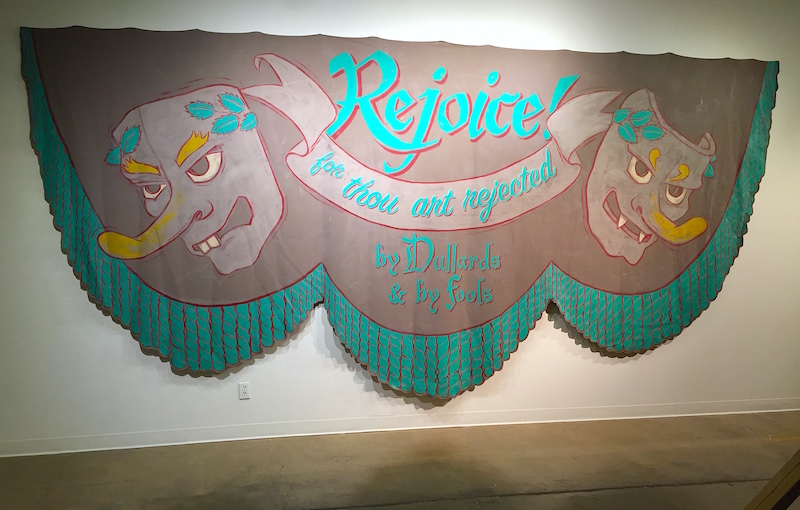 Sometime last week, a column I wrote back in 2014 started going viral again. Titled I wonder if this is the worst time to be an artist in decades, or maybe ever, this angry and despairing essay caught fire when it was first published, then disappeared from memory, and has mysteriously found its way back to the surface through social media in recent days. (I still haven’t tracked down the source of its re-emergence.) Our site’s analytics tell me it’s been viewed more than ten thousand times or so in the past five days. A word search of the title on Facebook shows that artists (it’s mostly artists) all over the map are sharing it, and mostly sharing in its tone of resentment and defeat.

I was on the road and mostly off-grid while this picked up steam last week and over the weekend, so I just reread the piece today for the first time since I wrote it. I had remembered writing it in a fit of late-night brooding irritation at what was my then personal Instagram feed (I think I stopped dealing with Instagram that same week) during that year’s Art Basel Miami. A number of people I followed were flooding their accounts with glamor shots from the fair, and the art work itself wasn’t benefitting from this orgy of images. The effect was gross. But while I stand by the essay as a plaintive if not impulsive screed of its time, I wouldn’t write that piece today.

In an attempt at an epilogue for that op-ed, one that I’m sure won’t get a fraction of the traffic of the original, I’d like to briefly follow up on it here, now. This is about artists, just as the original essay was, and I’m still worried. But the political moment is different now. June of 2017 feels very, very different from December 2014.

At the end of 2014, Obama was securely in office. The economy had mostly bounced back from recession. Most of us on the liberal side of things fully believed a democrat would be our next president, because it felt like the world was still drifting left. In the meantime, BFA and MFA programs were exploding in enrollment and cost, art auction records were making headlines every week, art fair attendance was at record highs, too. Those of us in the business of vivisecting the art world had the tremendous luxury of believing that things would continue on as they were, and we therefore also had the luxury of bemoaning the more absurd market trends that showed no signs of slowing. Today, when I read back over the original piece, I did it with one eye closed, because I remembered it as feeling loose and almost irresponsibly negative. But I don’t think so now. I just think it was an honest response to that moment, a sort of “But we’re better than this bullshit” cry for moderation and self-awareness from the art world in general and the art market in particular.

Something about that piece still resonates with artists today, it appears, though I wonder if this has more to do with a new, generalized anxiety and despondency at just how devalued art and creative expression is by the leaders in our current political moment, and by the half of the population that keeps drifting rightward in a fit of blatant populism née totalitarianism. The men in power today, and their followers, really, really distrust artists and artistic freedom—here, in Europe, in Russia, in Turkey, et al. Total power can’t afford the threat that artists pose. It’s in the leaders’ interest to undermine, bully, silence, exile, and threaten intelligent and creative people, free-thinkers, people with questions, people capable of great abstract thought and novel productive action. Historically this has always been the case. Trump and his ilk either ignore real art or make fun of it. If it were up to him, artists would stop making art altogether and just be drones destined for the junk pile. He and his lackeys are working on that.

So really, I’d like to follow up that 2014 piece with this thought: What was problematic about the art world in 2014 is still a problem, but the larger and deteriorating political environment changes the shape and source of the alarm. It may be a bad time to be an artist in a lot of ways, but it’s also more crucial than ever to be one, and to stick with it. Right now, just being an artist—and perhaps especially being one in a state as overrun by conservative leaders as Texas—is one of the most radical acts you can undertake. I don’t care if your work is didactic, political, inflammatory, or not any of these. Even the most academic landscape painting feels like it has a new meaning, a new and urgent reason to exist. It may be difficult to be an artist—to make a living at it especially—and the vulgarians out there will continue to twist and exploit the channels of money and production and popularity of certain kinds of work over others, or to stomp out real art when possible. But it feels to me that since the unapologetic rise of populist sentiment a couple of years ago, most artists have exploded with a newfound awareness of the essential nature of what they do, of what they can communicate.

It may be a bad time to be an artist, but it’s more important than ever to be one. I think nearly every person who’s contributed to Glasstire in the past 18 months has written this out in one way or another. It bears repeating. In June of 2017, being an artist feels like fundamental act of resistance, a call for and to humanity, and a reminder and signal of the full spectrum of what it means to be alive and awake in our lifetime. So if you can, please make the art. We need it.

And writing about the art doubles it through reflection. Keep writing and multiply the impact.
<3

Thank you for this. It reframes my despondence and realigns my sometimes seemingly lost direction. Although our work and thoughts as artists feel to be a prolonged wailing in the dark, it’s important to remember that not everyone is looking for enlightenment. Sometimes we are simply listening for hope.

and time as well to watch just a bit more Terence McKenna and finally understand, exactly what has been placed just out of sight….

(tea and crumpets anyone?)

There’s always Alex Jones and his foray into performance art. Seriously can someone dissect that for me?

So if you can, please buy the art. We need it.