A Nation Turns Its Lonely Eyes To Bob Ross

Bob Ross is everywhere again. What does it mean?

21 years after the TV painter’s death, Bob Ross is on a roll, thanks to streaming video and the gradual mellowing of irony into heartfelt appreciation. Latchkey GenXers who grew up watching Ross’s PBS show in the 1980s are now middle-aged and ready to feel good about something. Millennials don’t need skepticism to embrace Ross’s soothing aphorisms and mellow voice. 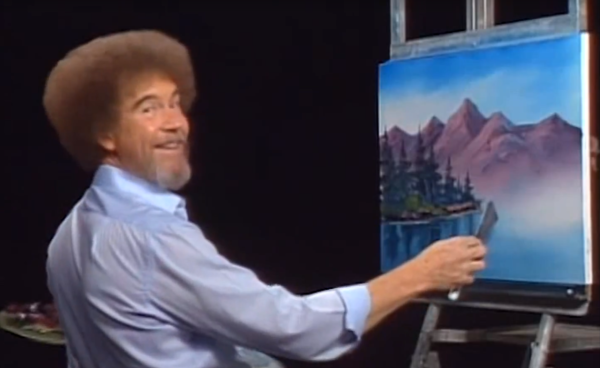 And Ross is very, very big right now. There’s a biennial reunion of certified Bob Ross instructors, a Bob Ross Bar Crawl, and a woman who is painting through every one of Ross’s 403 episodes, a la Julie and Julia. Ross’s white man’s afro and almost comically soothing voice have been memed and parodied endlessly, with appearances on Family Guy and Epic Rap Battles of History. Naturally he’s a hero to the ASMR crowd, a group of people who experience pleasurable responses to certain sounds. (Word has it that he’s also a favorite of stoners for marathon TV watching.)

On the surface, Ross’s show “The Joy of Painting” was never anything to write home about. It looked dated even in the early ’80s. Its crummy aesthetic—just Bob in a black room, painting landscape after landscape of trees, mountains, and reflective lakes—is Charlie Rose for the Sunday painter set.

But it’s not just Sunday painters who respond to Ross. According to PBS, 90% of viewers never paint along with the show. They watch, according to his longtime business partner Annette Kowalski, because he makes them feel good. As Foster Kamer wrote in the New York Times last year, “With the rise of new generations, and new sensibilities, Ross has come to be appreciated as a comforting, ever-encouraging figure in a noisy culture. He is the ideal teacher who never judges, never raises his voice.”

Of course, Ross’s mild-mannered persona, however genuine, was matched by his shrewd head for business. He was a canny marketer who understood how to use the media to build his brand. In the early ’90s he made promo spots for MTV, which ended with him saying, “MTV: It’s all just fluffy white clouds,” and “MTV: the land of happy little trees.” When he died of lymphoma in 1995, his business selling art supplies, videos, and certifying painting instructors was worth $15 million. 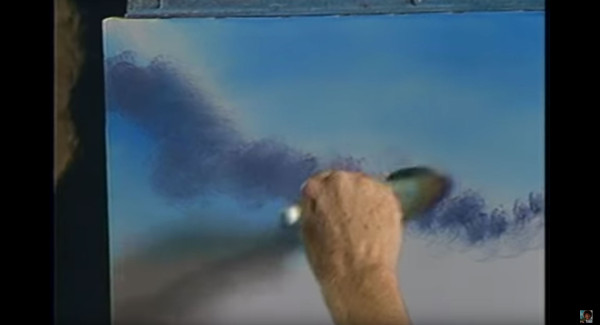 Ross paints in some happy little clouds with his 2″ brush.

Ross wasn’t always embraced like he is now. There was a period after his death when he fell out of fashion. His paintings, of course, have never been taken seriously by the art world, and anybody who’s interested in art’s capacity to explore the darker underbelly of human experience isn’t going to be drawn to his anesthetic message of contentment. Critic Mira Schor compared his show to Mr. Rogers: “Its message was: painting is easy, painting is safe. Painting in this neighborhood is the sum of a few tricks, and it is meant to be soporific, preventing troubling thoughts from disrupting the surface of the picture plane.” But that’s the thing: Ross may not be a great painter, but he doles out warm fuzzies every few minutes during one of his hypnotic shows. And it says something about the anxiety level of our national moment that he is a phenomenon again.

[I would argue that Ross’s attraction stems not only from his brand of everyone-gets-a-trophy reassurance, but also from the genuine magic of watching someone transform “just a little roll of paint” on the edge of a pallete knife into the side of a mountain. For non-painters, which is the vast majority of Ross’s viewers, there’s something cool about watching an idyllic landscape magically appear on a canvas in a tidy 30-minute interval. Ross may be using all the old tricks of academic painting, but for the uninitiated, those tricks are very satisfying to watch.]

And of course, there is Ross himself, a hypnotizing, enormously watchable presence. I stumbled into the show last night, intending to catch one episode. I ended up relaxing into several. You really can’t turn it off.

Here are some of Bob Ross’s sayings from the 26 episodes available on Netflix:

[About a log cabin door:] That little opening, isn’t that the cutest little thing?

[About a tree:] Look at that little rascal shining out there in the sun.

You can make the indication of a lot of little happy stones that live out here on the water. Pick out the ones that you like. Maybe there’s even a few out in the water, who knows?

Bet you didn’t realize you had that much power. But on this piece of canvas, you have total and complete power here. You can do anything that you want to do. You can move mountains, rivers, trees… you can determine what your world is like. It’s a tremendous amount of freedom on this canvas. And that’s what makes it fun. That’s what makes it fun.

Let’s get crazy. Let’s have some fun. Let’s get a fan brush. Shoot, that’s fun.

Maybe there lives a happy little evergreen tree right there. We just use the corner of the brush and just go back and forth, see there? That easy. And let’s give him a few friends, we don’t want him to get lonely back here. My gosh, with a scene like he’s got to look at here, he’d have to invite all his friends over to see it too. This is just—this is just too nice for him to keep for himself.

[About a tree:] If we left him out, shoot he’d probably be angry. Probably be angry. And we don’t want that; we want happy trees in our painting. I get some letters sometime, people say “everything in your world is happy.” And that’s true. We try to keep everything happy in here. Shoot, if you want bad stuff watch the news. In this world, we only have pleasant things.

Today, let’s just do a fun little painting and just—just enjoy. I’m just going to take the brush and make little circles. Little circular patterns all over, let it go just wherever you want it. This is really a nice way of, just taking out your frustrations. You having a bad day, this is a nice painting to do ’cause it’ll just make you feel good. You can just work out all your hostilities. There.

And this painting can really and truly become a world on its own. You can—you can find anything that you want in here—you can find peace, you can find calm times, anything. It’s right here. Shoot, let me get off my soapbox here and find a brush and let’s get crazy.

I look forward to seeing you on the next show, and until then, happy painting. God bless, my friend.

Happy Trees are Back! Bob Ross is Now...