Adriana Corral has dug a grave at Artpace in San Antonio. What she describes as a “burial plot,” a neat rectangular negative space, has been cut through the polished concrete floor in the gallery, down six feet, into the strata of dirt below the building’s foundation. You can look right into it.

I wish the hole were the only thing in the gallery, but there are other sculptural elements as well. Eight clay tablets cast with the Universal Declaration of Human Rights from 1948 are lined up on waist-high stands, and a large, thick sheet of glass leans against the wall nearby. (Corral explains that the glass is bomb-proof.) 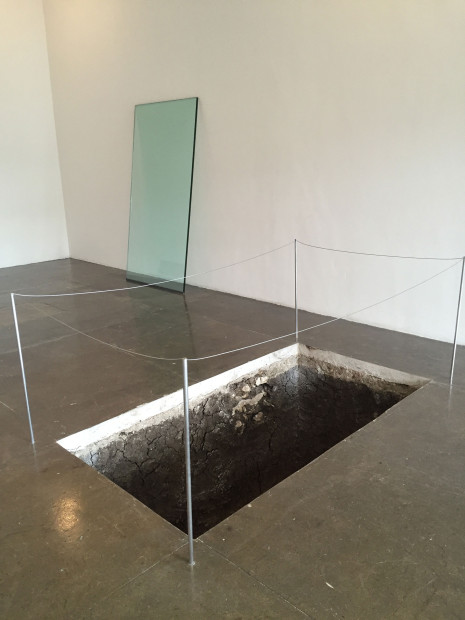 The artist is concerned with mass murders in Mexico, specifically of women and students. In 2014 she created a piece at Artpace using soil, with names of victims indecipherably printed on the wall. Both her 2014 installation and her residency show now on view are straightforward political protest art—earnestly didactic and conceptually unsubtle, but elegant, noble and perfectly appropriate for our anxious geopolitical moment (although really: are geopolitical moments ever not anxious?). The clay tablets and the bomb-proof glass leave absolutely no chance that Corral’s point will be lost on any viewer. 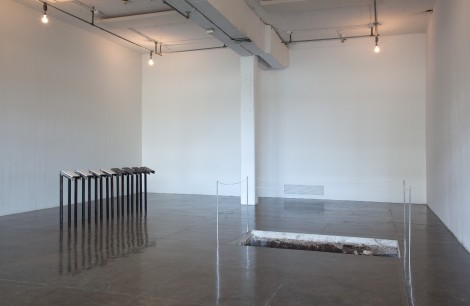 What is conceptually interesting in Corral’s show is the hole. Yes, partly because it’s a grave. For us humans, there’s something visceral about looking down into a human-sized hole in the ground. But it’s even more fundamental than that.

Corral is not the first artist to dig a hole in a gallery. Chris Burden did it in 1986, in his piece Exposing the Foundation of the Museum at MOCA Los Angeles. Burden’s piece did not explicitly reference graves. His point was to expose the concrete piers in the museum’s foundation. In the catalog for Burden’s 1988 retrospective, curator Paul Schimmel describes the piece plainly: “Three excavations approximately 9 feet deep by 16 feet wide were made in the earth to reveal the concrete footing which supported three steel columns. Stairs enabled viewers to descend into the excavations to observe where the concrete met the earth.” 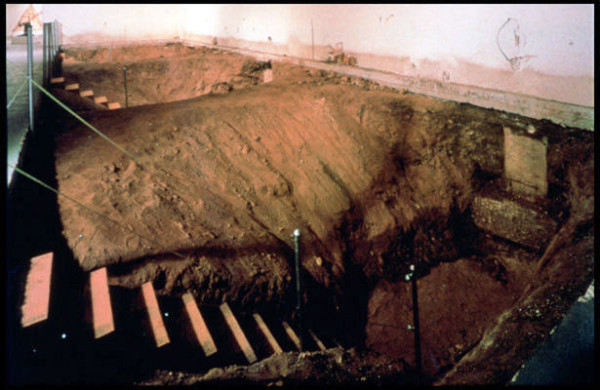 Chris Burden, Exposing the Foundation of the Museum, 1986

Urs Fischer picked up the theme with You at Gavin Brown’s Enterprise in London in 2007. Both Burden and Fischer dug big, macho excavations—the look-what-I-can-do equivalent, using negative rather than positive space, of a giant Richard Serra steel piece. (Jerry Saltz raved over the Fischer hole at the time, but I would agree with Carolina Miranda that Burden’s hole was better. It had a lot more meat on its bones than Fischer’s). Corral’s hole at Artpace is tidier, smaller and much more literal: it’s a negative box with sharp edges, and it’s clearly grave-sized. But in its context, Corral’s hole doesn’t suffer for not being a big mess. Burden was exposing the foundations of the museum, whereas Corral’s goal seems to be to expose a dark foundation of human society. Her hole also shares the pleasure of looking down into the earth and the simple, destructive satisfaction of expensively tearing into a building’s foundation. Look down at what this whole human endeavor is built upon, Corral suggests. 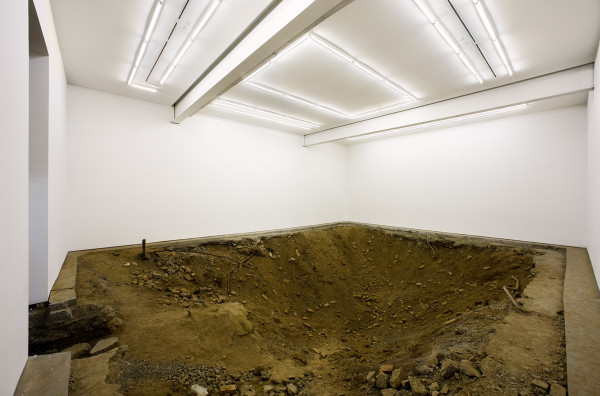 Digging a hole is the most basic form of subtractive sculpture. Most people will never carve a piece of marble, but we’ve all dug ourselves a hole at one point or another. The space we define, whether it’s Michael Heizer in a canyon or a kid digging a hole at the beach, is about what’s not there. It’s about absence. Absence can be neutral, as in a work of abstract art, or it can be laden with meaning. As in a grave.

A grave is perhaps the most powerful negative space we experience because of its communal finality (as one family member likes to say, nobody gets out of here alive). But a grave paradoxically is also a beginning, a foundation: dust to life to dust, and back again. For her part, Corral will be burying the clay tablets and a time capsule in the hole at Artpace at the end of this show, ensuring (hopefully) an eventual exhumation. If nature abhors a vacuum, then so too does a grave want its body. I think this is what works about Corral’s hole. We are inexorably drawn to look into it, to consider the dirt down below, normally unseen, and to think about what’s missing.

What profit is there in my blood, if I go down to the Pit?
Psalm 30

Adrianna was part of a show “Fair Play” that ran October and November, 2013 at Nicole Longnecker Gallery in Houston. Her installation piece, “Within the Ashes,” begins with an aerial map view of Ciudad Juarez masked off on the gallery floor and adds marked sites of found mass graves from the 2002 Juarez Cotton Fields femicide case. Using ashes from burned paper lists of victims’ names, Adrianna sifts the ashes over the map, adding red powder pigment suggesting blood onto the masked grave sites. She then carefully sweeps all the ashes and pigment together and repeats the process until all of the ashes are red with “blood.” It was solemn and very moving as you considered what she was illustrating.

It was a powerful performance piece. What a shame Nicki Longnecker had no clue what she was showing.