Territory of the Imagination at UTEP

Parts of the desert landscape on the way to the University of Texas at El Paso might spark associations with the imagined terrain of some distant orb. A current exhibition there, at the school’s Rubin Center for the Visual Arts, is a four-parter called Territory of the Imagination: At the Border of Art and Space, and the show expands that sci-fi reference with DIY explorations of stepping away from terra firma and venturing into the atmosphere and beyond. 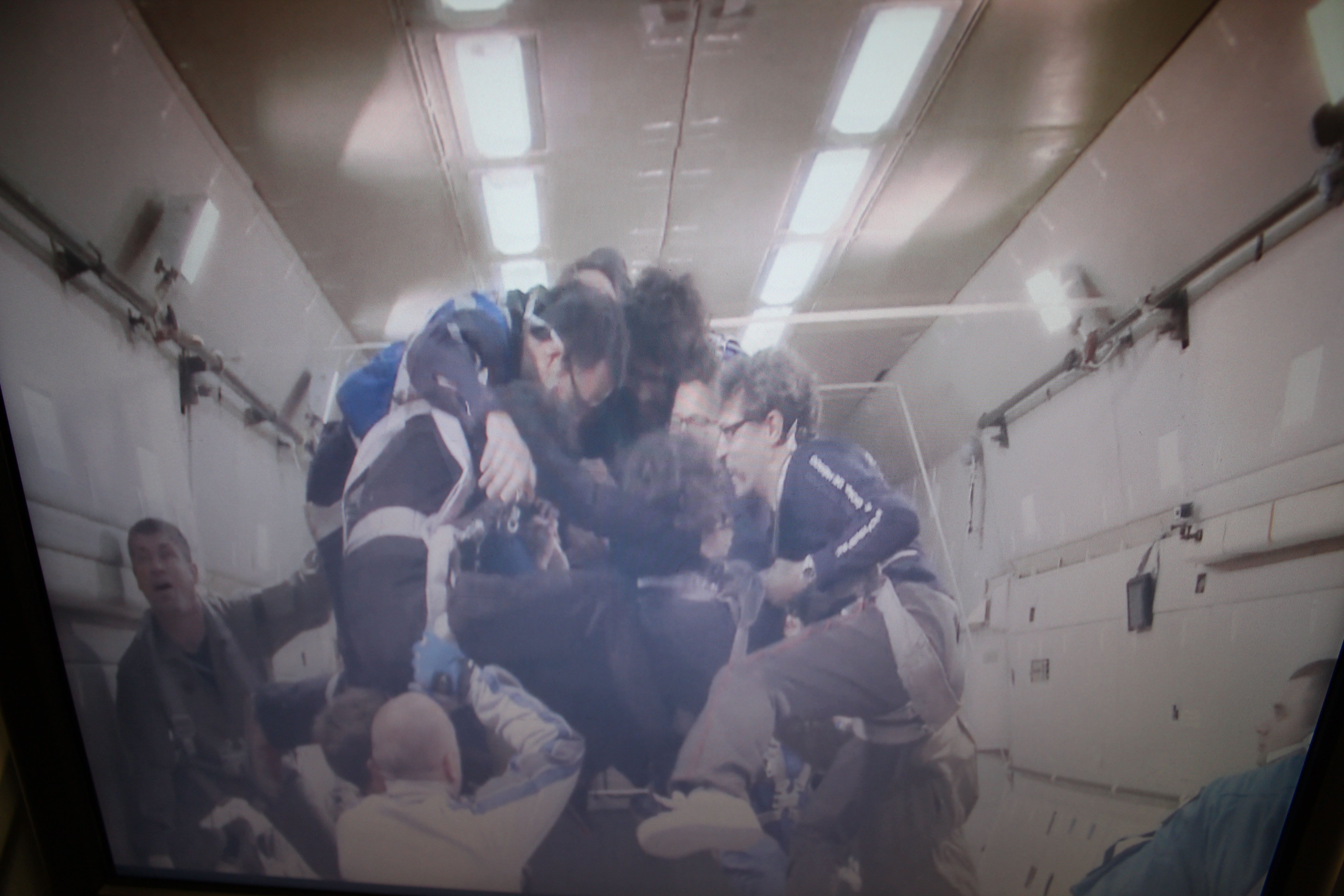 Nine artists from Mexico traveled to the Yuri Gagarin Cosmonaut Training Centre in Star City,  Russia, where they boarded the Ilyushin 76 MDK to experience zero gravity and generate work for Matters of Gravity, A Space Mission: Artists Reflecting on Gravity, which is one of the four major Territory components. Another component, Tomas Saraceno: Becoming Aerosolar, documents the Argentinian-born, Berlin-based artist’s investigations of space travel in solar-powered balloons. Arte en Orbita presents short films by “postcolonial space agencies” in Latin America, Africa, and Palestine. The Mexico City cooperative Astrovandalistas built a laser cutter in UTEP’s Fab Lab, then incised primitive yet futuristic narrative pictographs on stones that will be placed in the landscape in El Paso and across the border in Juarez for Imaginario Inverso .01/Inverse Imaginary .01. 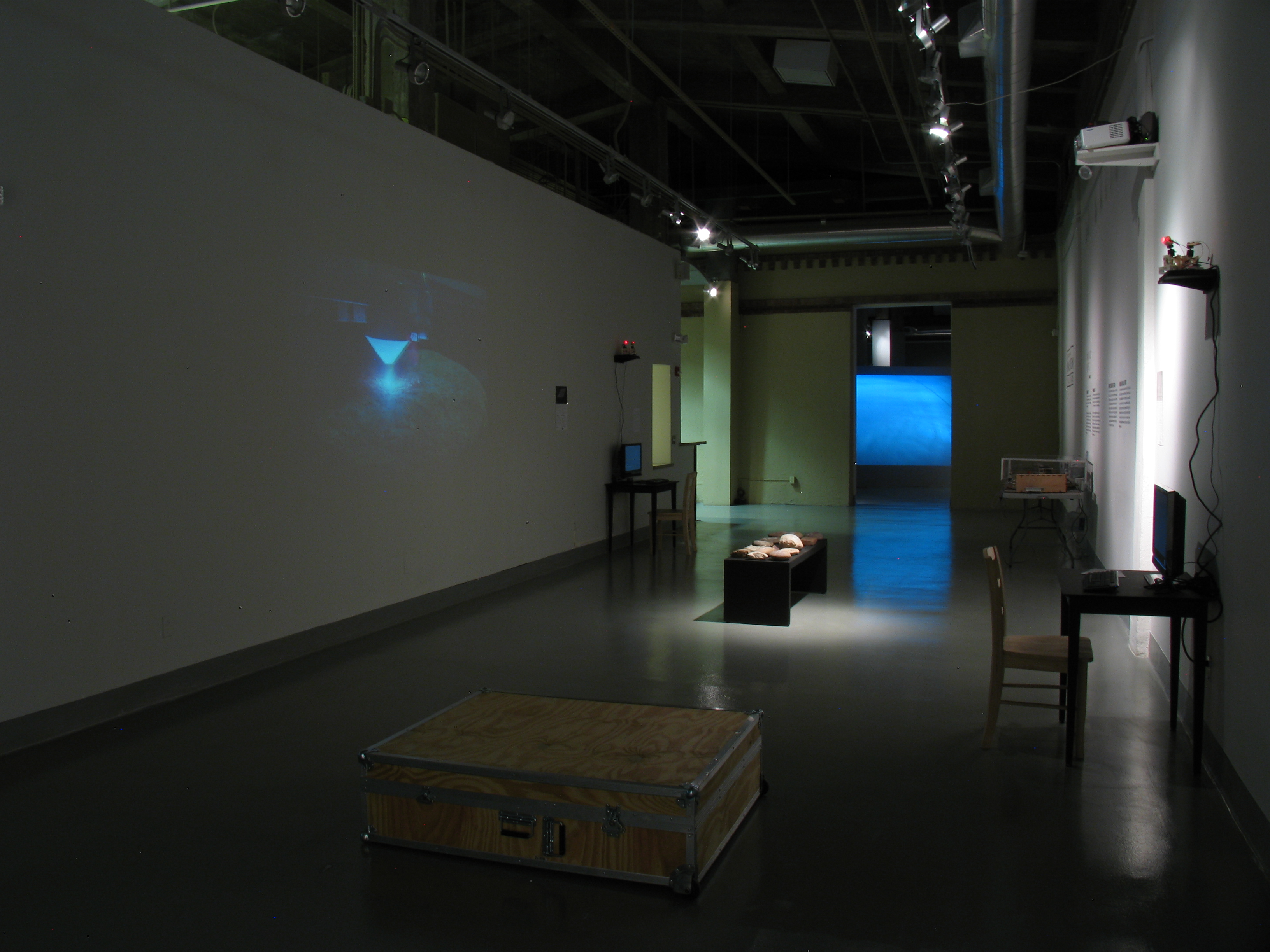 Rubin Center director and curator of the exhibition Kerry Doyle cited as a philosophic underpinning of the exhibition the Bogota Declaration of 1976, in which Colombia and seven other equatorial nations asserted dominion over their synchronous geostationary orbits. The Declaration was a response to the international Outer Space Treaty of 1967, which stipulates that “outer space …is not subject to national appropriation.” The Declaration signatories wanted the space-exploring powers of the so-called First World to keep their colonial space dreams out of the signatory nations’ vertical turf. Thus, Doyle says of the show: “The artists are responding to the takeover of territory by Europe and the U.S. by generating new ways of relating to space.” Such concerns about access to space inspired one of the Territory artists, a single-handle whirlwind named Nahum, to hypnotize participants for Lunatic, a recent performance at the Zapopan Art Museum in Guadalajara, and send them on a virtual journey to the surface of the moon. 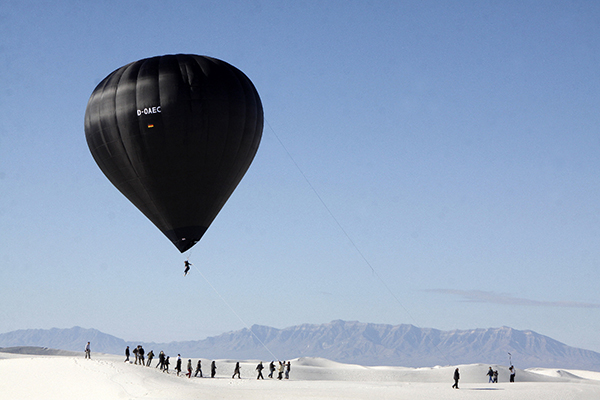 In Territory of the Imagination, Tomás Saraceno’s aerosolar sculptures make perhaps the most tangible gesture of that impetus. Represented in photo enlargements in the Center’s downstairs Project Space, the works call for space travel and upper-atmosphere dwelling powered not by ether-fouling hydrocarbons but by the warmth of the sun. Museo Aero Solar depicts the lift-off of a “flying museum,” a patchwork quilt-looking solar balloon made from multi-colored, recycled plastic bags. Poetic Cosmos of the Breath captures the shimmering iridescence of a solar dome with a paper-thin foil membrane. During a Rubin Center seminar entitled “Space Without Rockets” held shortly after the opening of Territory last November, participants traveled to the otherworldy landscape of White Sands Missile Range in New Mexico, where volunteers suspended from the Aerocene, a solar sculpture (or balloon), ascended about 100 feet as colleagues kept the craft from further ascent by holding tether lines. British curator Nicola Triscott recalled her Aerocene ascension as “an intensely sensorial experience that left me feeling profoundly alive.” 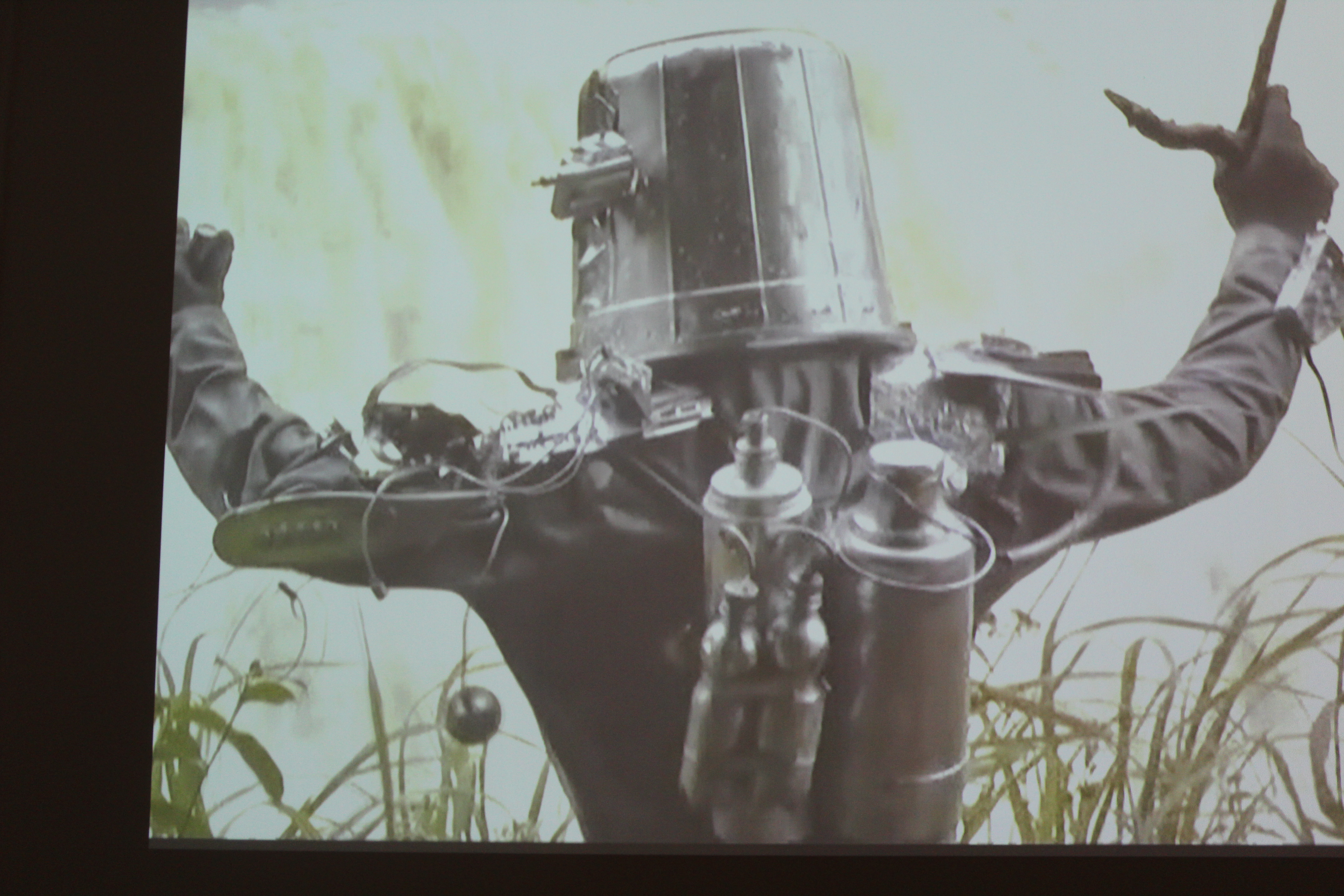 The short films of Arte en Orbita, shown in the Center’s L Gallery, engage in playful appropriation of space technology and mythology. A Kongo astronaut in a homemade space suit (is that a cooking pot on the gone-galactic figure’s head?) re-experiences the African jungle anew with a gentle gait that reminds one of the Teletubbies (and in a good way). Somewhere in Central or South America, a shaman conjures energy that causes inscribed sections of a Mesoamerican ruin to blast off from an archeological site, traveling the near-heavens with flat rectangular space wings attached as highland children watch, amazed.

The collective Astrovandalistas, first organized in Tijuana in 2010, describes Imaginario Inverso as “an ongoing project that studies the effects of the industrialization of our social imaginary in contexts where corporate and government interests supersede the individual and collective concerns of citizens.” As an example of their research intended to subvert such power plays, the group seeks to “reinterpret NASA’s laser communication technology for terrestrial purposes,” such as the bridging of our own sociopolitical gaps. 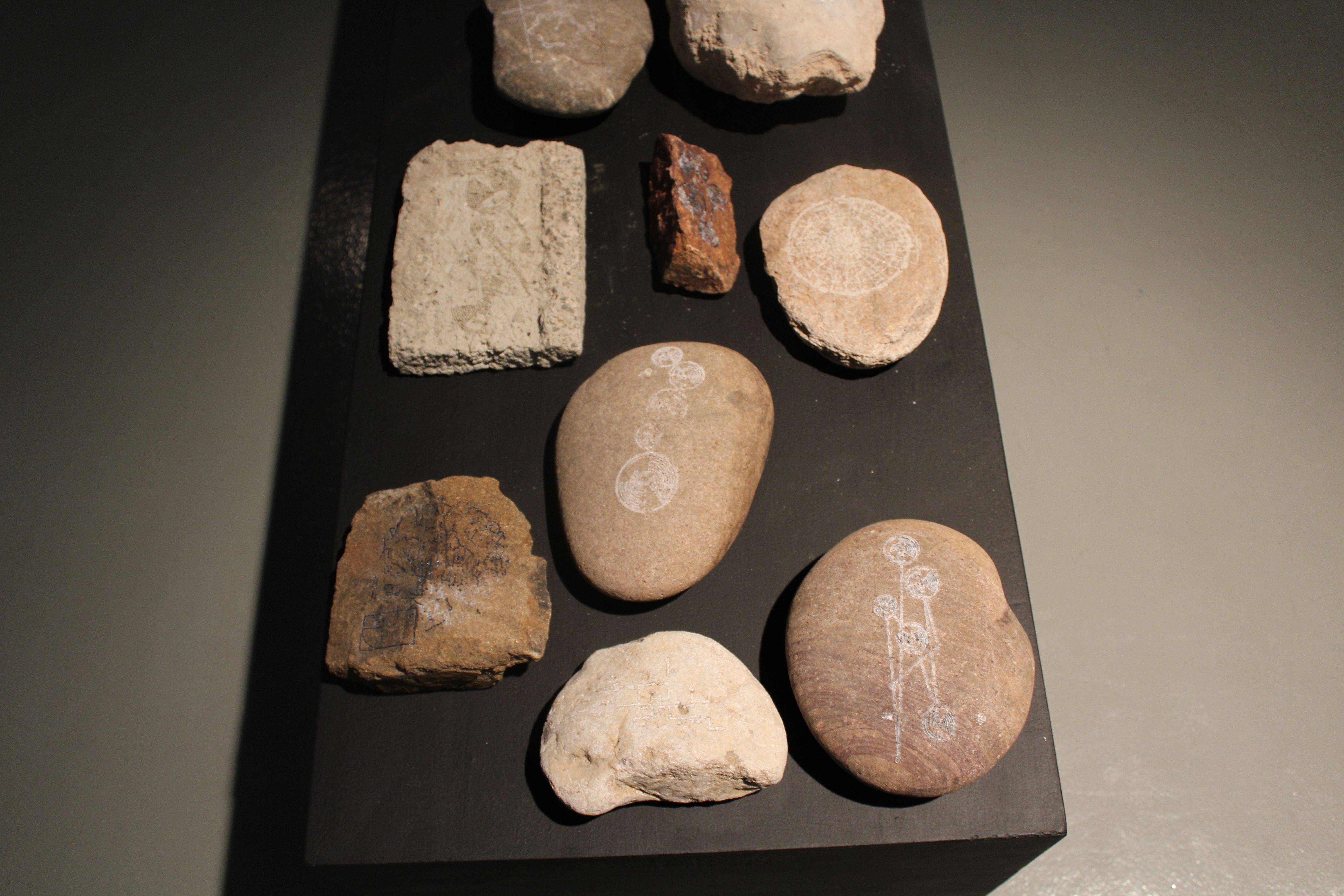 In El Paso and Juarez, Astrovandalistas participated in the Rubin Center’s unique community outreach and beyond-the-gallery activities with cross-border workshops intended to spur collective communication interventions that would reappropriate technology and generate “micronarratives …that will consider life in this region 100 years into the future.”  The group also presented a demonstration in a nearby hillside cave of its laser communication system-in-development. Silent film footage of the cave installation plays on a loop in the L Gallery near a bench holding the stones with incised narratives about the border region. The group returns to the Rubin this month to place the stones out in the landscape, and it’s fun to imagine some future beings puzzling over their meaning, much as archeologists have pondered Lower Pecos rock art over the last century. 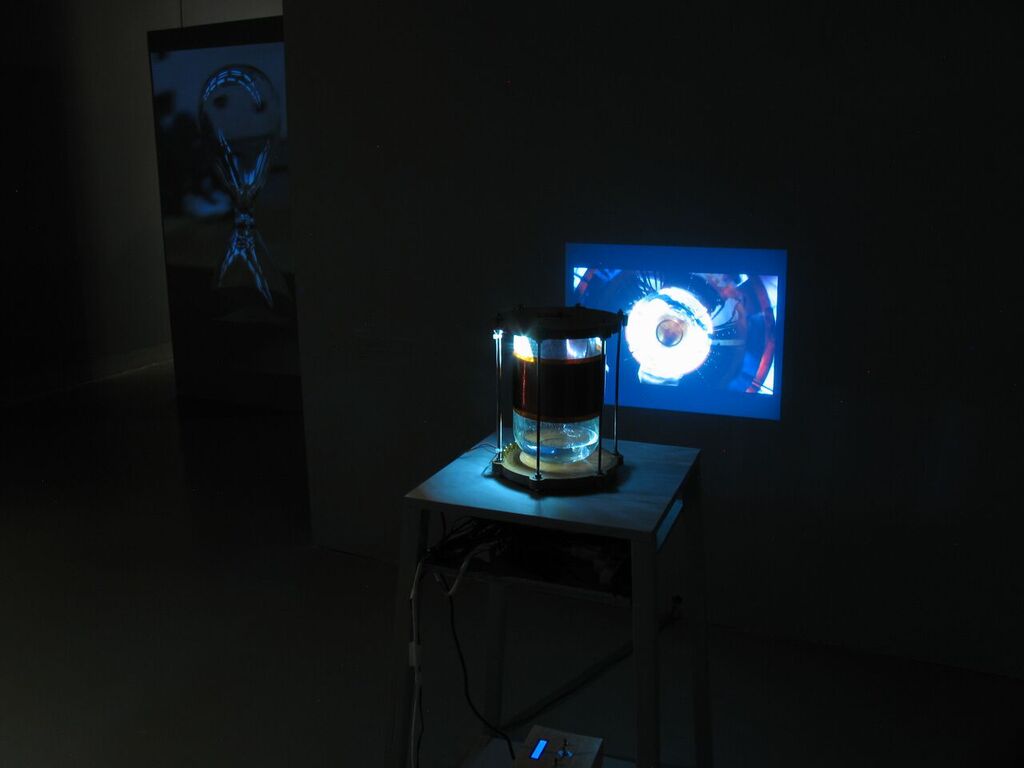 In the Center’s large Rubin Gallery, nine Mexican artists respond to weightlessness with sound, video, installation, and a number of unclassifiable pieces in Matters of Gravity. Organized by artists Ale de la Puente and Nahum, the project sounds as complex to pull off as a Christo wrap. (The effort was complicated by Russia’s ongoing tensions with Ukraine.) Seminars, training, repeated medical check-ups, and endless negotiations with Russian officials took a full two years before the nine artists and one scientist traveled to Star City.

All the preparation led up to a very short time of defying Isaac Newton, but it was marvelously worth the work. “A few seconds were enough to experience eternity,” de la Puente and Nahum concluded, “to tell a story, to break a paradigm, to liberate a molecule, to have an illusion, to experience movement without references, to create poetry out of falling bodies, to make the useless become useful and to search for the impossible embrace.” 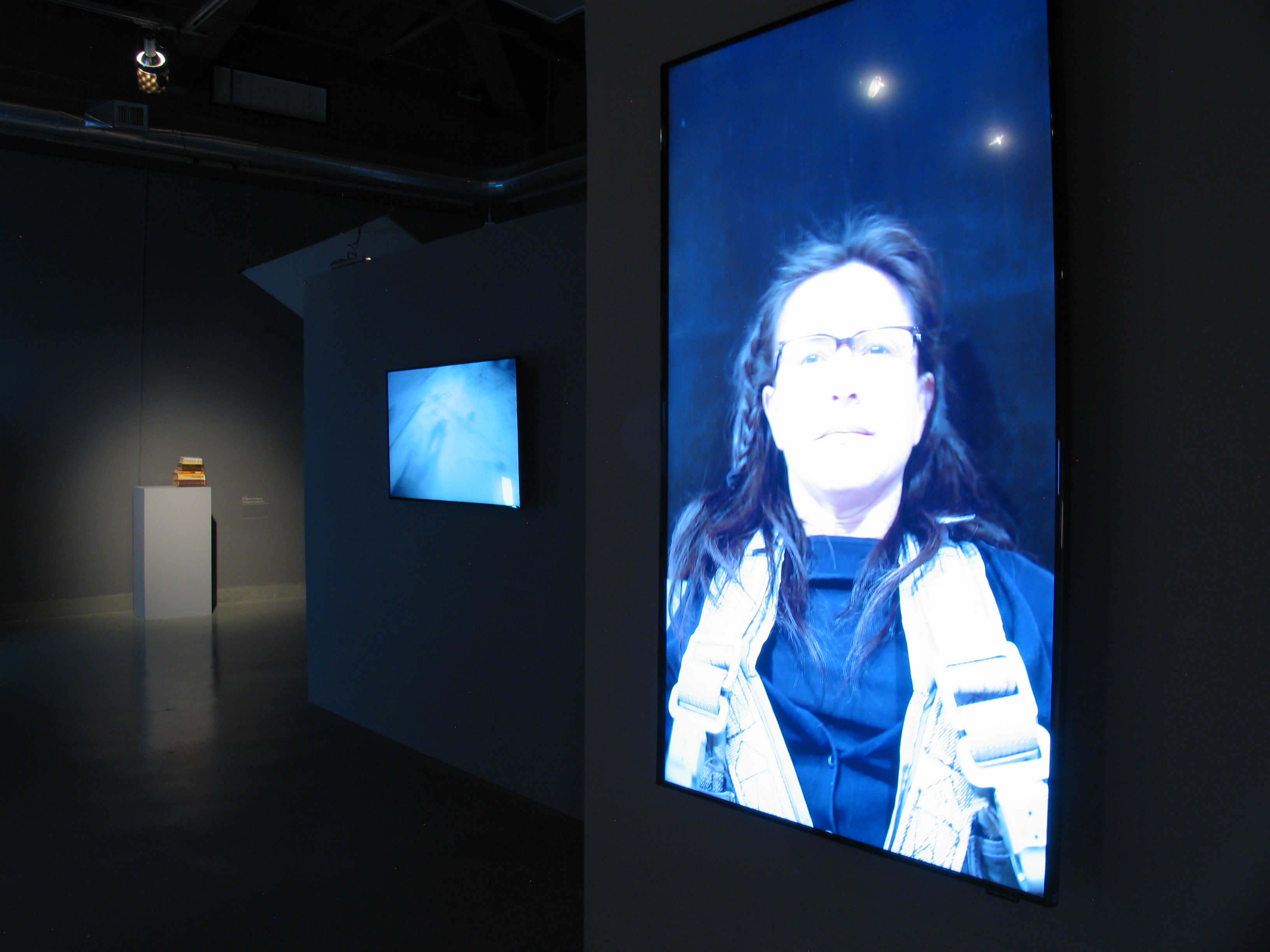 De la Puente photographed a globe floating in the weightless chamber for …And the Earth is in Zero Gravity, projecting 18 images in a continuous loop that provide a topsy-turvy, slightly disturbing display of our beloved speck of dust unmoored. The video screen in Ivan Puig’s Me-Paradigm captures the dramatic, startling facial expressions of his fellow artists as they are first introduced to the loss of gravity, experiencing “mental and physical alterations” and as “one of the biological paradigms more intimately bound to the definition of our existence and the existence of everything we know of this planet disintegrates.” 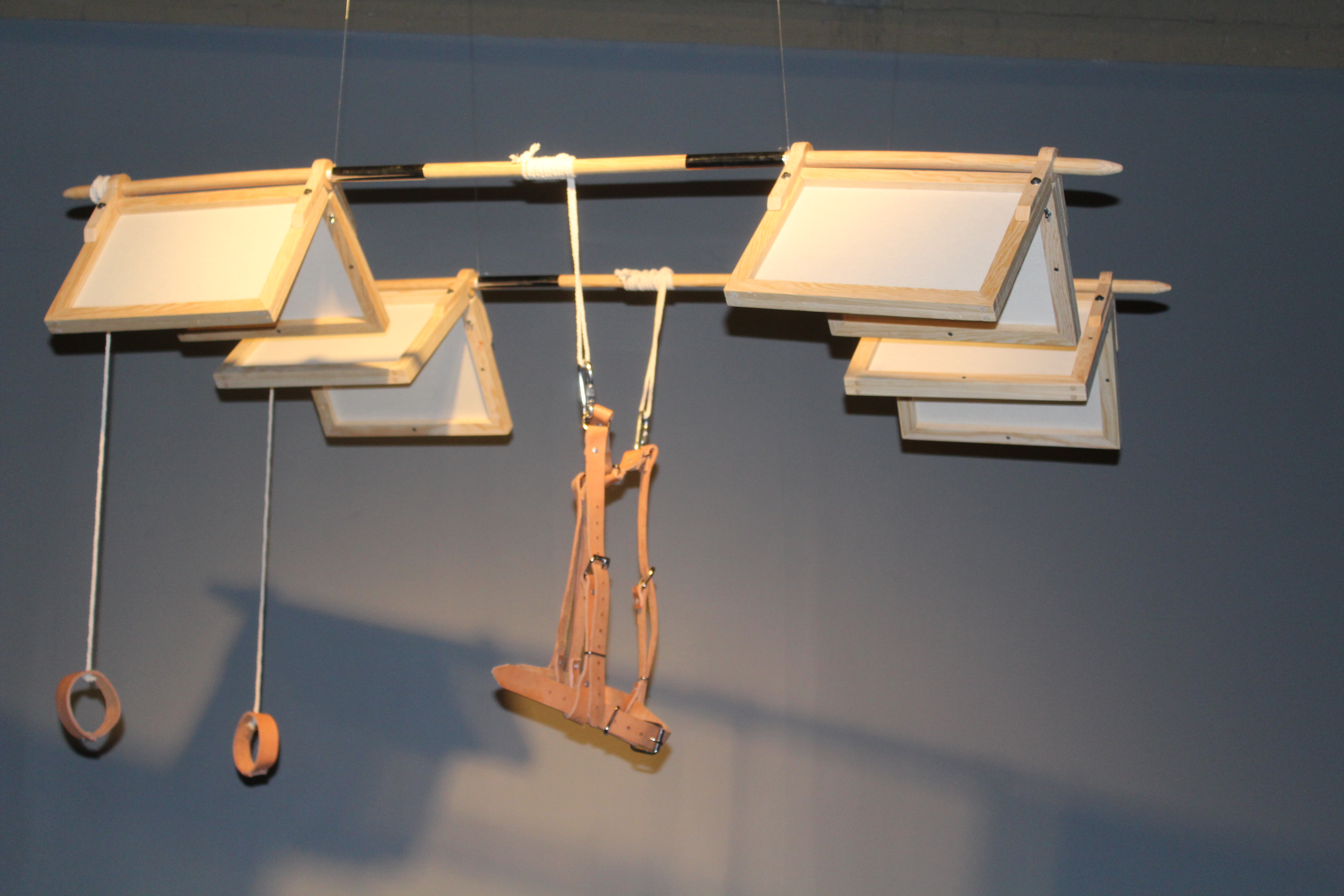 Tijuana artist Tania Candiani’s re-creation of the flap-winged flying contraption devised by French locksmith Sebastian Besnier in 1678 hangs in the gallery near a video of her gliding with the gizmo in the anti-gravity chamber. Besnier didn’t so much defy gravity as merely surrender to it more gradually—it’s said that while he did ‘fly’ with his device, he could only do so in descent from an elevation. Nonetheless, in those fleeting moments when he stepped out into the vastness of empty space, Besnier surely felt sympatico with the maxim inscribed on the Rubin Gallery wall: “To be in zero gravity is to lose the sense of being lost.”

Author’s Note: Kerry Doyle pointed out that, just as Rubin Center exhibitions often spill out into El Paso’s city, mountain, and desert environment—and across the Rio Grande into Juarez—the end of an exhibition is often not the end of its related programming. That continuing connection is detailed in the book ‘Curating at the Edge – Artists Respond to the U.S./Mexico Border’ by the Rubin Center’s founding director Kate Bonansinga (U.T. Press, 2014).

“‘Curating at the Edge’ is an interesting hybrid,” writes Lucy R. Lippard in the book’s foreword, ‘combining a manual on how to create a distinctive university art center with an informed critical text on art reaching across the U.S./Mexico border—and by extension over all borders.’”

Rubin Center and Machine Project team up in...