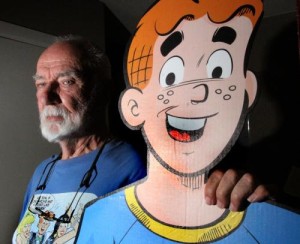 El Paso native Tom Moore died Monday morning at the age of 86, reports the El Paso Times. Moore is best known as being the illustrator for the Archie Comic Book series from 1953 through 1988.

Born in 1928, Moore was a graduate of El Paso’s Austin High School. He joined the Navy and, after leaving, attended Cartoonist and Illustrator School in New York with the help of his GI Bill, studying under “Tarzan” comic strip illustrator Burne Hogarth. A year later, Moore signed up with Archie Comics and was the primary talent behind the popular series. (Bob Montana created “Archie” in 1941; Moore began inking the character in 1953.)

Moore was also an illustrator for “Snuffy Smith,” “Mutt and Jeff,” “Underdog” and “Mighty Mouse.” After his official retirement, Moore continued to freelance and teach part-time at El Paso Community College. In 1996, the El Paso Museum of Art held an exhibition of some of Moore’s work and his comic collection.

His wife of over six decades, Ruth, also worked with Archie Comics in the 1950s as a writer. They raised two children, Bujanda-Moore and Holly Mathew.