An Evening of Border Art & Literature with Guillermo Gómez-Peña takes place tonight at the El Paso Museum of Art, at 6 pm. Gómez-Peña is a seminal Chicano performer whose performances offer perspectives on the immediate future of the Americas. Tonight he will perform with Balitronica, and the artist describes the event as “imaginary activism,’ a form of radical democracy and citizenship.”
Tonight’s performance will include spoken-word poetry, activist theory, radical storytelling, and language experimentation. This is a “new spoken-word monologue created for El Paso’s Dia de los Muertos celebration.” The evening is co-sponsored by the Rubin Center for the Visual Arts at The University of Texas at El Paso. 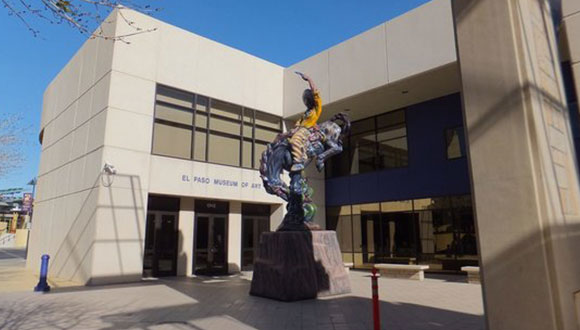 Gómez-Peña gave a stunning performance at the MAC Dallas in 2016 for New Cities, Future Ruins,  an arts initiative that engages planetary crises of rapid urbanization, migration, and sustainability through the cities of America’s Western Sun Belt.
For more info on tonight’s event, please go here.
****
Guillermo Gómez-Peña (US/Mexico) is a performance artist, writer, activist, radical pedagogue and director of the legendary performance troupe La Pocha Nostra. Born in Mexico City, he moved to the US in 1978. His performance work and 12 books have contributed to the debates on cultural & gender diversity, border culture and US/Mexico relations. His artwork has been presented at over a thousand venues across the US, Canada, Latin America, Europe, Russia, South Africa and Australia. A MacArthur Fellow, Bessie and American Book Award winner, he is a regular contributor for newspapers and magazines in the US, Mexico, and Europe, a contributing editor to The Drama Review (NYU/MIT) and the Live Art Almanac (Live Art Development Agency-UK). Gómez-Peña is also a Senior Fellow in the Hemispheric Institute of Performance and Politics and a Patron for the London-based Live Art Development Agency, He was named Samuel Hoi Fellow by USA Artists in 2012 and received a Eureka Fellowship from the Fleishhacker Foundation in 2013. He is currently preparing two new books for Routledge (2019) and a documentary portrait of his beloved troupe.
0 comment

El Paso Museum of Art up for National...