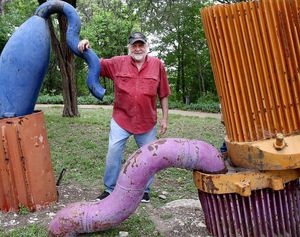 Trib reporter Carl Hoover interviewed him about the old days, when students helped haul and painted the hunks of scrap metal for not-so-easy A’s in Wade’s classes at McLennan Community College, before he moved to Austin, took the nickname Daddy-O, or ever thought of placing a giant igiuana atop a Fifth Avenue bar in Manhattan.

All this reminiscing has been stirred up by a documentary film, Flight of the Iguana, in the works about Wade and his populist marvels.

With the recent death of Betty Whitehead Willis ( welcome to “Fabulous Las Vegas” ) Daddy-O has moved up a notch on the imaginary “Living Artists List” who have created world known roadside icons. There is a daily parade of people of this world, snapping pictures of Bob Wades “Cowboy Boots” here in San Antonio. Congratulations on getting “Funny Farm Family” restored to its original splendor. DOH