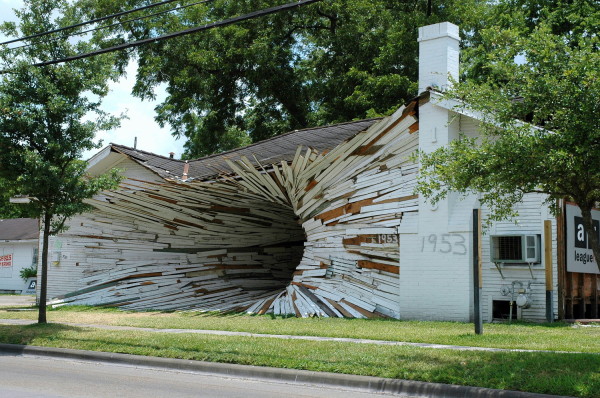 Art League Houston has named Havel Ruck Projects (Dan Havel and Dean Ruck) for its Artists of the Year 2014 award and selected Stephanie Smither as its Patron of the Year, it announced today. The annual ALH award seeks to honor “those whose work or patronage has had a significant and positive impact on contemporary visual art in Texas.”

Havel Ruck Projects is perhaps most known for their 2005 installation Inversion in which a derelict house in Houston appears to be have been sucked into itself, forming a cavity within the building;  all of their projects similarly employ the remnants of old architectural sites to make new and compelling public and quasi public sculptures and installations. The two Houston-based artists have worked together since 1994.

Stephanie Smithers, also a Houstonian, is a well-known contemporary folk arts advocate and collector who has long-championed self-taught artists. She serves on the board of a myriad of arts organizations throughout the country.