About a year ago, I was introduced to the work of Nicolas G. Miller during the jurying of the Dallas Museum of Art’s annual Awards to Artists. His proposal was impressive enough to earn him a Kimbrough Award, the funds of which went on to help him realize the current exhibition at The Reading Room. I vaguely recall the proposal in those early stages, but remembered that it involved composing a soundtrack using “found” sound files and creating an edition of sound sculptures in the form of vinyl records. There was more to it than that, of course, and his stood out for its intrigue, ambition, and cerebral intellect. That Miller’s proposal would be realized in Karen Weiner’s intensely smart and wonderfully intimate space The Reading Room seemed like a cosmic connection and a perfect match for Miller. 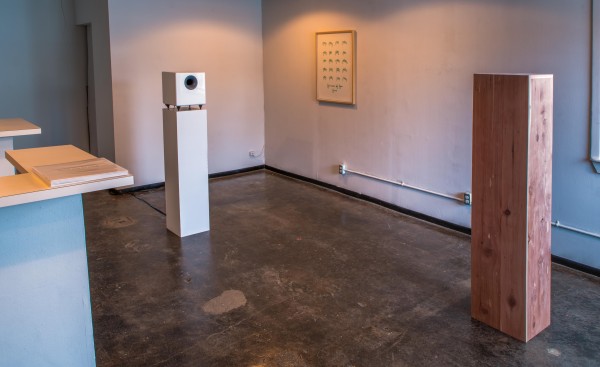 At the center of the single-room gallery stand two eye-height objects. A custom-built, narrow cedar hutch faces a painted pedestal with a white cube subwoofer on top. Nestled within the Judd-esque hutch are 60 exhibition copies of Common Sense (The Record). The sparse room is filled by a quiet rumbling that crescendos to a decibel level that could be easily mistaken for thunder, vibrating the woofer, the pedestal, and anything next to it in its most powerful moments. The work’s phenomenal effects on the body are felt through the deep vibrations of sound, mixed with the light scent of cedar. During the most dramatic moments in the soundtrack, puffs of air shoot out of the subwoofer, startling anyone within distance of being literally touched by sound.

The sound files are low frequency effects tracks pulled from Steven Spielberg films. LFE tracks are deep, low-pitched sounds, specifically designed for subwoofers and commonly used in action films to provide physical bodily sensations during climactic moments like crashes, thunder, or explosions. Miller has condensed and layered the sounds, abstracting them into rumblings that could be anything from the moment Jaws attacks to T. Rex’s roar in Jurassic Park.

In connecting LFE tracks and the common sensations they produce with Hollywood blockbuster films, Miller is drawing attention to the communal aspect of the movie theater, offering a critique of the mass consumption of the American film industry. Film theorist Siegfried Kracauer warned against the psychological effects of cinema, and blamed Weimar-era distractedness induced by the film industry for the totalitarian Nazi regime that followed. Miller’s work is not so much a warning, but rather a critique of the Hollywood blockbuster (i.e., capitalist) machine and the herd mentality of its mass audience of consumers. Miller’s choice of Spielberg is pointed, as the director is known as a pioneer of the practice of product placement – the most infamous example being the use of Reece’s Pieces in E.T. Spielberg is also touted as one of the richest filmmakers in the world with his career very much built upon his ability to produce moneymaking films. Where Kracauer’s warning was almost expressionistic in its dramatic appeals, Miller’s critique reminds me more of Robert Smithson’s cool mode of thinking, who described the experience of movie-going:

The ultimate film goer would be a captive sloth. Sitting constantly in a movie house, among the flickering shadows, his perception would take on a kind of sluggishness. He would be the hermit dwelling among the elsewhere, forgoing the salvation of reality. Films would follow films, until the action of each one would drown in a vast reservoir of pure perception. He would not be able to distinguish between good or bad films, all would be swallowed up into an endless blur.[1] 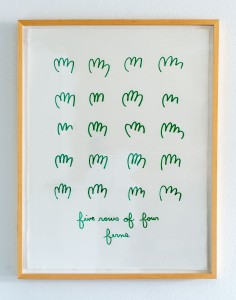 Miller has used blockbuster films as a source before. In 2011, he collaborated with Marfa-based painter (and fellow former North Texan) Jeff Elrod for a project titled Terminator Redux, installed in the Chinati Foundation’s Locker Plant. But Miller’s show at The Reading Room has a different feel to it than previous works. When we strip away Miller’s critique, we are still left with a meditation on memory and nostalgia, presented in a cool and indifferent aesthetic. On one wall of the gallery, a framed print with five rows of green squiggly lines and the words “five rows of four ferns” adds a hint of playfulness and color to the otherwise stark and stoic show. The print is an ode to concrete poet and gardener, Ian Hamilton Finley, whose work Miller became familiar with through an exhibition of the poet’s ephemera at the Marfa Book Company in 2010. Initially, Miller’s inclusion of the print seems out of place in this exhibition about sound, but it grounds the exhibition in memory, specifically memories of place and time.

Having grown up in the suburbs of Dallas in the 1990s, this place holds the key to Miller’s adolescent memories. With the advent of the multiplex theater and the release of such blockbuster films as Spielberg’s Indiana Jones, Jurassic Park, or Saving Private Ryan, Miller’s soundtrack can be thought of an appeal to our sensorial experiences related to memory and how cinema and movie-going have played a role in the development of our common or collective memories as a society.

In addition to his artistic pursuits, Nicolas G. Miller is the manager of Recondite Industries – an online artist’s editions shop where one can purchase anything from cassette tapes containing Miller’s experimental compositions to sound sculptures on custom-made USB thumb drives.