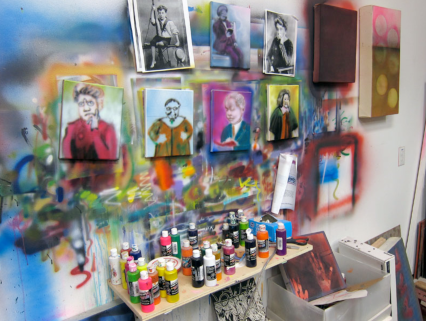 Houston artist Tony Day believes in freedom. Not bald-eagle-laser-etched-on-your-Ford-truck-‘Murica freedom, but freedom of expression. Day is a Yosemite Sam for the creative process, but he’s not toting pistols or donning a giant hat. Gleaning from the willful pioneers of American culture, Day’s visual rendition of historical freedom fighters is freewheeling and joyful. His bright and whimsical aesthetic contrasts the stoicism of traditional portrait painting.

Often an artist’s portrait is relegated to gelatin silver print or oil painting. In Day’s small works, these reverent visual motifs are thrown into disarray. Day’s paintings and prints still retain the mystique of hinting at the subjects’ “inner significance”; a trait Aristotle defines as the only “true reality” in art. Yet they are too frivolous to take themselves seriously. As Charles Dickens claimed, “There are only two styles of portrait painting, the serious and the smirk.” Day’s portraits are somewhere between, where earnest meets trivial. The result is perplexing, but there’s a level of fun that I respect about them and truly enjoy.

One of my favorite paintings Day had in his studio is of televangelist Jerry Falwell: 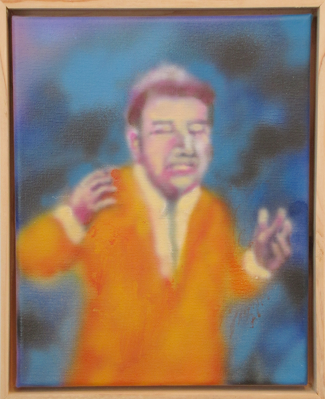 The portrait made me laugh because airbrush inevitably reminds me of Cholo t-shirts I always wanted but my mom would never buy me. Yet, since I found humor in Day’s portrait, it allowed me to recognize Falwell’s tenacity and hope in his beliefs, however opposite they were from my own. Unlike the drama of a television clip or the quick severity of a snapshot, Day gives Falwell a chance to become more approachable, flawed, and human. 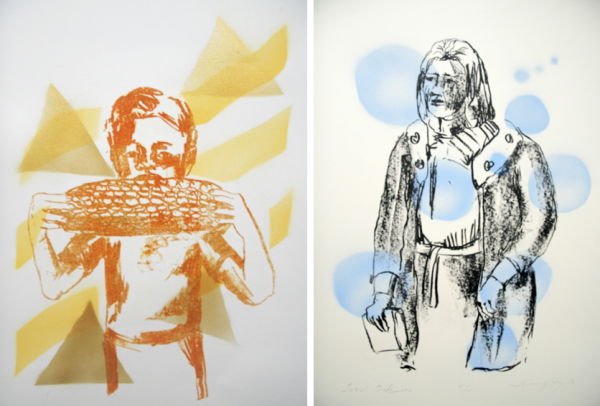 In the two litho portraits above, Day uses a more straightforward approach to depict Lord Baltimore and a young child “eating” a corn cob. In each lithograph, Day’s main focus is still centered on concepts of freedom. Lord Baltimore and his family were the fist to enact and enforce the Maryland Tolerance Act mandating religious tolerance for Trinitarian Christians in what was then a land dominated by Catholicism. In Cyprus Cylinder, a child looks to be eating a corn cob, but Day’s play on words indicates the child is holding the Cyrus Cylinder, an ancient artifact that British Museum Director Neil MacGregor calls, “the first attempt we know about running a society, a state with different nationalities and faiths.”

Although these prints are not as frivolous as the airbrush portraits, Day’s cartoonish drawing style and soft patterned backgrounds juxtapose the historical weight of the images. There is also a strange apprehension in both characters’ faces that indicates the familiar human quality we find in Day’s portrait of Falwell. Unlike traditional portraiture which usually focuses on idealizing the figure, Day imbues these portraits with human worry and fear, tempered with a tinge of whimsy. 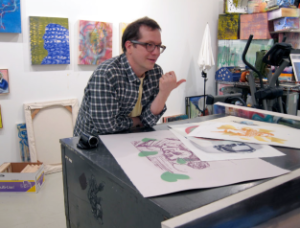 When I asked Day why he was drawn to various liberators and founders like Madalyn Murray O’Hair or L. Ron Hubbard he explained, “I am looking for people who inspired freedom of religion and thought in America and how that lead to an understanding of a progressive mythos in our culture”.

The idea that people continually progress is an interesting place from which to derive art. Does progression exist or is it just a utopian fantasy built one generational step at a time like Georges Guétary up a lighted staircase? I asked Day if he believed in progress and he wiggled a bit in his chair before saying, “It is possible, but I have a feeling that whatever would be good progress may also lead to our extinction. I do think there is hope.”

Day is greatly inspired by his grandmother, who created this book on applied arts and drawing and was a children’s illustrator. One of her illustrations hangs above the bookcase.

Day’s hopes are squarely placed on his family and his community. Day moved back to Houston to take up teaching at a local public high school and, when you ask him how his students are doing, Day’s face lights up and he can’t shut up about their progress and what could be done to get them to even greater heights. Together with his wife Justine Waitkus-Day, who is also an artist, their Houston home strikes a balance between funhouse and adult art laboratory.

Not only does Day make art but also, along with steady exercise and eating well, he’s taken up therapeutic laughing. It sounds bizarre but there’s science to back it up. It seems if you smile and laugh more, even if you force yourself to smile or laugh, you become happier more often.

As a proponent of creative freedom, this practice further closes the gap between his everyday life and his artwork: “It helps—I mean anything that keeps your mind open, that keeps you aware and awake, is a good thing.” 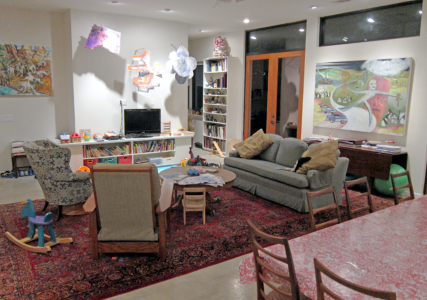 I think that Tony Day is one of the few fighting the war for freedom. It’s terrible that the irresponsibility of a few allow another few to impose boundaries that restrict various kinds of freedom. Brother is getting bigger. . .

There is hope in progress if we approach progress like da Vince.

It is evident that many conscience decisions were made, on various fronts, for Mr. Anthony Day to create the “Believe What You Want” exhibit.

Decisions were made about personal and public philosophy, aesthetics, media, size, frames, lighting and viewing distance. Present is a high level of discipline that is lacking in many of today’s artists or artist posers. I can only imagine the readings and discussions that had to of taken place in order for these paintings to have achieve the level of depth. The art-romantic in me even envisions a good fistfight to help decide a point.

I would have never thought of using airbrush like Tony. Growing up, which I just finished doing, and yes it took almost six decades; airbrush was something I would use to give images a glossy commercial polished look, like the models in a men’s magazine. Yes my chauvinism is showing, but I must tell you that, that was the period when I first started growing up so deal with it. My brother-in-law, Julio, an automobile artist painter, also used airbrush when he wanted to give cars a nice crisp edge.

Thank you Tony for an engaging cohesive group of work. Often after viewing an art exhibit, I’m left with the feeling that many an artist produce, one piece that doesn’t, “say it all.” Why the image doesn’t even worth 1,000 words. There work is more like a sentence in a book, which is sometimes titled “Untitled.” At that point, I am then reminded of the possibility that if you give an indefinite number of monkeys a paint brush and paint or a camera, you will get something you can display. . .”Untitled” for sure.

Thank you Mr. Day and thank you Art Palace.