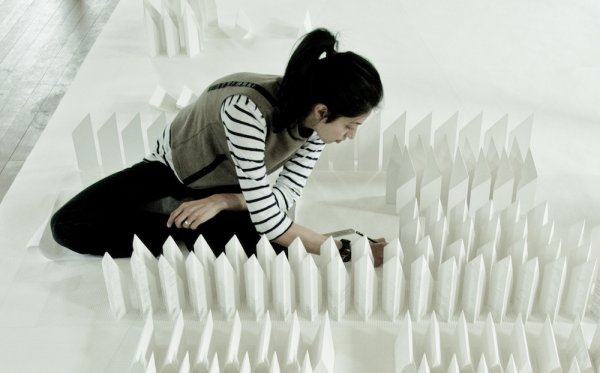 I discovered Seher Shah perched on the floor of the Jones Center lobby, carefully arranging the hundreds of small, white, cast Hydrocal objects that comprise her Object Repetition installation, part of her show Constructed Landscapes at AMOA/Arthouse. The result was minimalistic and kinetic, reminding me of Maya Lin and Jacob Hashimoto, other artists who decipher the structural elements underlying our everyday environment to reveal common patterns.

Seher Shah, installation images from Constructed Landscapes (2013) at the AMOA-Arthouse. 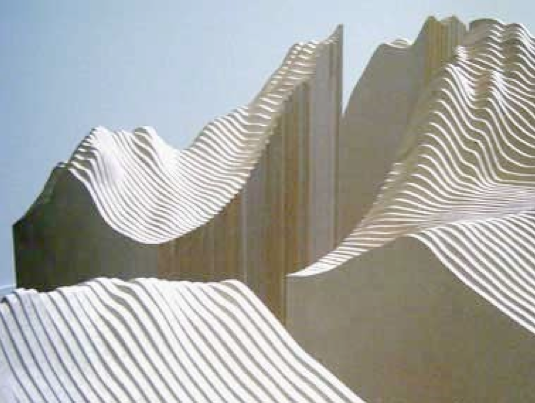 To Shah, Object Repetition is a metaphor for anxiety, in that the physical act of repeating is a way to release one’s anxiety. It references both quick, cheap, mass production and the crystal pinnacles found atop skyscrapers, such as the Frost Bank Tower in downtown Austin. From a distance, Object Repetition looks like a serene, yet skittish, white wave of perfection; but closer, the illusion of clinical uniformity is gone, as ink markings, air bubbles, and handmade imperfections become apparent. By reducing the built landscape to its simplest geometry at such a small scale, Shah invites the viewers to project their own associations onto glaringly bare reenactments of everyday environmental design. The effect is memorable, both beautiful and unsettling. 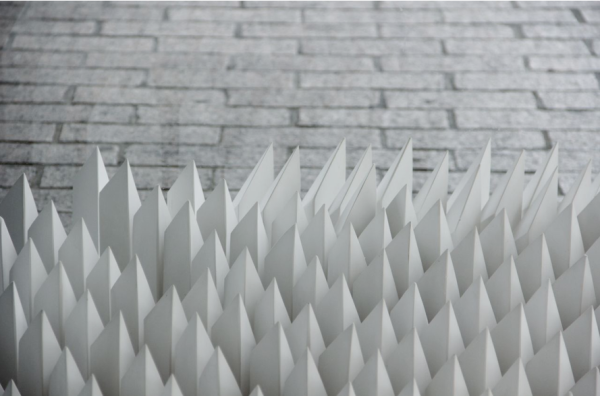 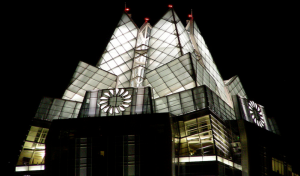 At a recent AMOA-Arthouse panel examining the intersection of architecture and art, Shah noted the influence of François Jullien’s classic book, In Praise of Blandness, on her views about design in a hyper-saturated, consumerist society. “I always thought of blandness as being a very negative word. But, instead of an object imposing design decisions on the viewer, it’s the other way around. You are given this freedom of design to have yourself imposed on the object. It’s about looking at materials that have flaws rather than that are hyper-designed.” While these views explain Shah’s affinity for handmade, labor-intensive sculpture and drawing, I had to reorient myself to her ideological use of the term “blandness” which countered my intuitive take on it. Jullien writes, “The quality of blandness: no sooner do you identify it than it begins to appear at every turn. Blandness, by definition, pays little heed to the borders our various disciplines like to draw. As the embodiment of neutrality, the bland lies at the point of origin of all things possible and so links them.” Viewing Object Repetition through Jullien’s “bland” lens illuminates how Shah’s transformation from skyscrapers to miniature models is a way of abstracting the world into neutral, universal connections. 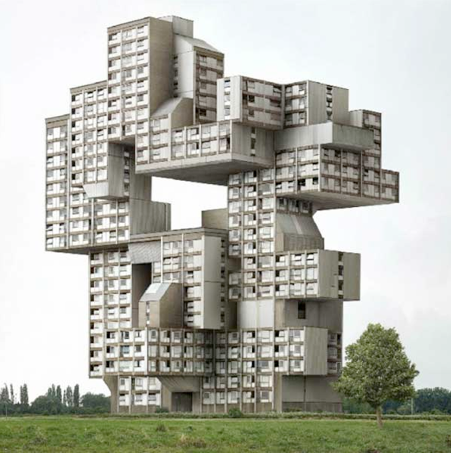 Modern architecture is Shah’s primary source of inspiration, especially Brutalism and the iconic French architect Le Corbusier. While this particular piece, Object Repetition, references a pinnacle, it is a trademark of Shah’s work in general to reiterate urban structures such as buildings, amphitheaters, and monuments in their most minimal forms—squares, rectangles, triangles, crosses, and lines. If the five pieces which comprise Constructed Landscapes feel like different contemplations of the same story, it’s because they are pulled from separate bodies of work and are presented grouped together for the first time in this show. Shah’s characteristic practice of reduction and reconstruction are similar to the work of Filip Dujardin and the collaborative group Gijs Van Vaerenbergh, two Belgium-based artists who also use architecture as a conduit to explore the use of space and its relationship to individual humans. 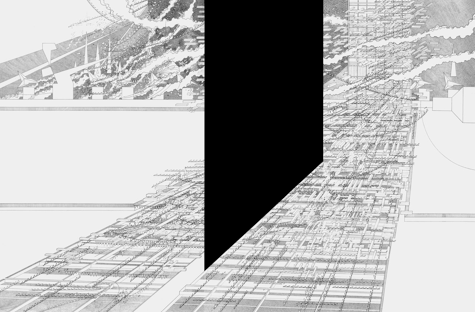 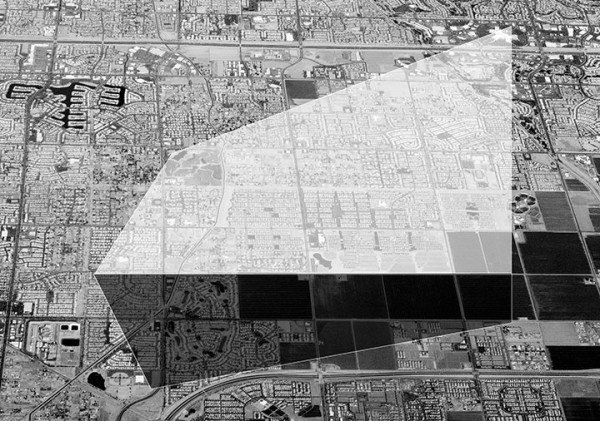 Mammoth Aerial Landscapes and Object Relic are similar to works by Marine Hugonnier and Salvatore Arancio. In all of these works, reductive modernist shapes dominate a backdrop, turning landscapes or newspaper pages into visual, geometric exercises.

An evocative, beautiful pair of large prints titled Geometric Landscapes and the Spectacle of Force and The Mirror Spectacle blur geometric and organic, even ornate, styles together. These prints are intricate re-drawings based on a 1903 British coronation ceremony photograph at the Delhi Durbar fairground. They are incredibly detailed: monolithic silhouettes, urban artifacts, and references to Mandelbrot’s fractal sets are executed with a striking machine-like degree of control and perfectionism.. It is challenging to discern which marks are handmade and which are digitally printed. Shapes repeat, shift, and evolve, blending reality-based constructs with internal musings. 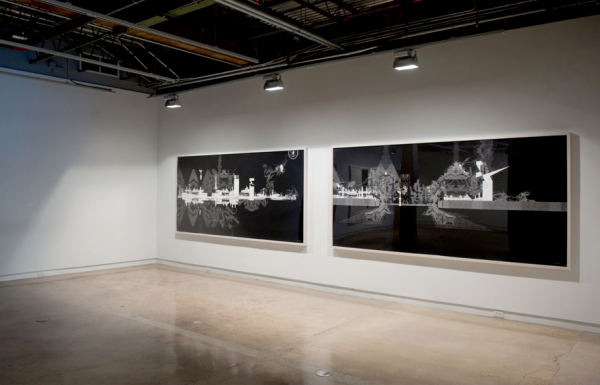 Seher Shah, Geometric Landscapes and the Spectacle of Force and The Mirror Spectacle, installation view. 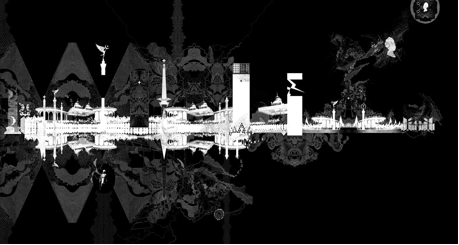 Seher Shah, Geometric Landscapes and the Spectacle of Force

With its strong consciousness of form, meticulous technique, and self-referential symbolism, Constructed Landscapes at AMOA/Arthouse, Seher Shah’s first solo museum show and her first exhibition in Texas, is an intriguing assemblage of theoretical, psychological, and geographical elements.

Seher Shah: Constructed Landscapes will be on view at The Jones Center through June 30.