Three unrelated exhibitions now on view at AMOA-Arthouse at the Jones Center share a common motif in their explorations of public and private space—how space dictates behavior, privilege or self-worth.

Two of the installations—O Século by Cinthia Marcelle and Tiago Mata Machado and Temporary Insanity by Pinaree Sanpitak—attempt to measure the ambiguities of public and private space, while the third, Seher Shah’s Constructed Landscapes, draws more definite distinctions. All three installations, however, present irreverent views on the confines of space imposed by powerful individuals or institutions.

The motif of public and private space could be stretched to encompass interiority and exteriority. Seher Shah’s Object Relic (Unite d’Habitation) deconstructs low-income housing by the modernist architect Le Corbusier in gouache and graphite to reveal that the structure isn’t a solid concrete mass; it also contains space. The difference between public and private isn’t as much at stake, here, as space itself—what was once outside is made inside by the building materials. 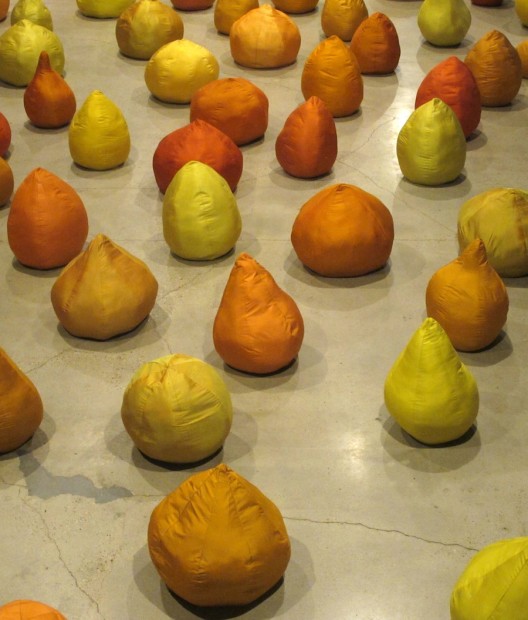 Sanpitak offer a more complex view of private and public.  Temporary Insanity collects a few dozen two- to three-foot silken gumdrops, in shades orange and gold, on AMOA’s second floor. My first impression was of beanbag chairs waiting on a factory floor to be packaged and shipped. However, when I walked between the pieces, they began to gyrate and hum, resembling eggs or breasts underneath padded silk bras. The movement is suggestive, flirtatious, but contained. Exit the installation and the mounds become still again. The sense that the gumdrops are meditating recalls Sanpitak’s native Thailand, as does the impression of a factory left by AMOA’s concrete floor. I picture Thai women sewing fine garments for tourists and trade—in the romantic version, they’re seated comfortably in a circle, wearing loose-fitting clothes and laughing; in the realistic version, they’re wearing uniforms and facing a wall, bent over sewing machines.

The final piece, O Século, is a work of total disruption and grim humor. The nine-minute video depicts an empty street abutting a tall concrete wall. We can’t see the top of the wall, but we see curlicue shadows of barbed wire. Suddenly, construction debris begins to hurl across the screen—crates, hard hats, fluorescent tubes, oil barrels, tires, clothing and dust. After a few minutes, I begin laughing. It’s the repetition of the hard hats, the slapstick pops, snaps and whacks, and the duration of the piece. But when the laughter subsides, the materials begin to form a narrative.

AMOA’s literature accompanying the piece interprets it as a commentary on industrial growth, but I see it more specifically as a prison wall. The hard hats are the men and women who built it. And the rest of the materials are construction supplies. O Século, which means “the century,” protests the time and energy spent on building prisons. Prisons as a waste of materials. And the builders are as subject to the prison as the prisoners, both living wasted lives. 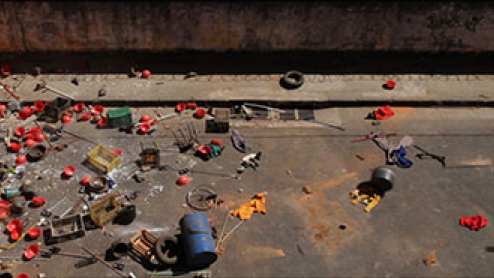