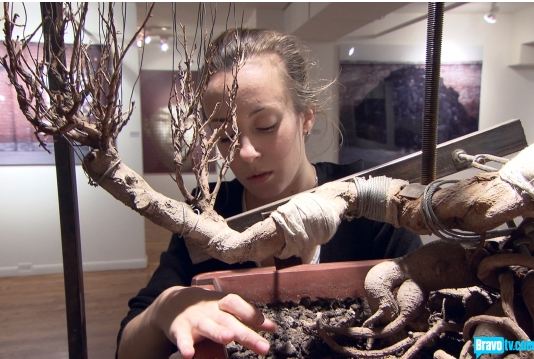 “How about I don’t and we can just say that I did?” Bravotv.com

So episode three of “Gallery Girls” starts off with the girls of Eli Klein Fine Art, which is good for the purposes of this blog because that’s where I have the majority of problems with this episode.  As per usual, Liz is shown picking at her nails and vaguely clicking away at her computer (aka online shopping) while Maggie stuffs envelopes.  Eventually, Eli asks Maggie to make sure a set of bonsai sculptures all have the exact same number of tiny pebbles with the ridiculous instruction, “Don’t disturb the roots or the dirt.”  And I’m not talking about a couple pebbles, at one point Maggie began counting over one hundred.   I’d personally rather sort out plastic shopping bags.

Also, instead of asking Liz to assist in this little endeavor, Eli takes her out to dinner across the street and laughs about making Maggie do annoying work.  Did anyone else notice during this little exchange that Klein looks like Sesame Street’s Count von Count turned into a real boy a la Pinocchio?  Later, while Eli and Liz show the über famous Jane Holzer around the gallery, Maggie is forced to stay in the back stuffing envelopes even after Holzer asks her to join them.

This is where my first issue comes in.  Klein is acting like the exact flavor of ass that I particularly despise.  If you’re going to have interns, especially ones that actually want to work in galleries forever, maybe you should actually try to teach them something.  Or at least not show blatant favoritism towards your intern with potential client connections.

Look, I get it.  Maybe the artist wanted the pebbles to be counted.  The gallery world is filled with unglamorous tasks that have to be done.  Tomorrow morning I have to wake up and go scrub the plaster off the floor of my boss’s brand new, and recently renovated, gallery space.  The difference is, my boss is actually nice about it and isn’t pulling some Cinderella crap on me.  She is going to be doing just as much work as I am, like a good boss.

Anyway, I’ll get off my little soap box for a sec to talk about Liz.  PLOT TWIST!  While I still hate Liz the gallery girl, I kind of dig Liz the artist.  At least she tries during her classes instead of being useless and complaining that her Coke tastes like soap.  A significant portion of this episode was dedicated to Liz talking about her past as a party girl who had to go to rehab as well as her daddy issues, buttttt I don’t feel like boring you with the details of that mess.  It isn’t particularly artsy. 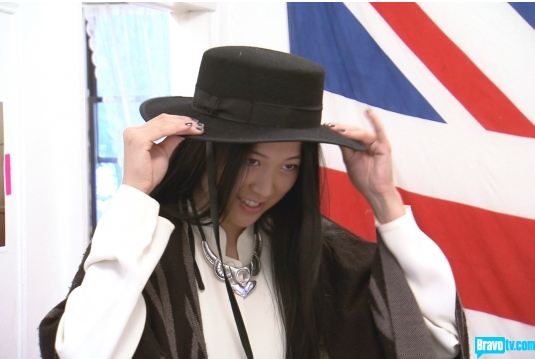 Angela’s “puritan slut” ensemble is not as amazing as her “mating bird” costume but I think we can agree you needed to see this picture. Bravotv.com

I am looking forward to seeing more of artist-Liz though since Angela is definitely not going to provide the artist side of this whole gallery girl situation.  Again, Angela has another aptly named outfit, this time called the “puritan slut”.  However, in this episode, we actually get a glimpse of Angela the artist.  She’s a totally incompetent artist, but whatever, at least we’ve moved into the art-related realm.  The best (and yes I’m using that word sarcastically) Angela-as-an-artist moment came while discussing with two friends her plans for putting on an exhibition.  Excluding all the references to “producing” her show, asking how to make herself an it girl, and the major emphasis on the venue and guest list over the art, Angela’s absolute shining moment as an artist came when her friend told her she needed more work and asked if she was going to shoot more photos.  Her response was:

“Ummm, I was already thinking about doing that, but, you know, we’ve all got like a million things going on right now…”  Cue angry (and completely legitimate) artists’ rants…..now.

At End of Century, Claudia tries to curate a show by an abstract minimalist artist and then discusses how much the artist charges for his work, and what percentage the store will get, after.  Major fail.  Chantal, then, somehow proves to be the more resourceful of the two by arranging a successful jewelry trunk show by a (surprise) hipster artist.  She even *gasp* had the brilliant epiphany that the store should set up a sales station during their little shindig.  REALLY.  That just now came to you.  Claudia, when Chantal proves to be more capable than you are, you should probably realize that something in your life has gone horribly awry.

As for Kerri and Amy, they mostly vied for their boss’s attention.  It wasn’t really all that entertaining.  Although, at one point during the episode Amy got wasted and partied with some frat stars at a bar.  If that scene alone doesn’t get this show nominated for an Emmy, I’m going to demand a recount.
Next on Gallery Girls:

Angela gets hit on by a guy with an Asian fetish.  Major “EW”….Maggie celebrates her birthday with her boyfriend for the first time.  Who would have guessed that would be dramatic….Angela may not have a venue for her photography exhibition.  I think the universe might be trying to tell her something there…. And Liz doesn’t want to hang out with Amy because she’s, well, Amy.

Awaiting the next episode. Seems the script is demanding some tough creativity for Casey.