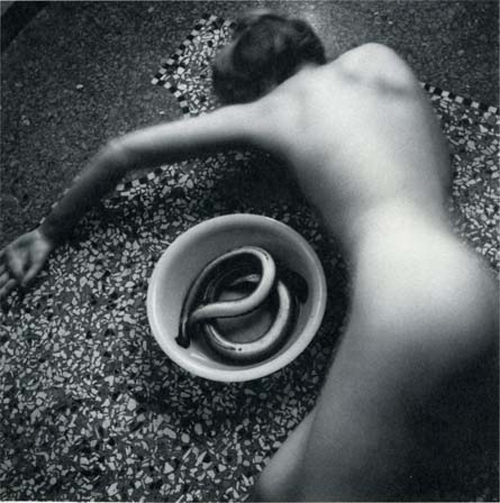 I was a late-comer to Francesca Woodman‘s pictures but liked them right away. That was around 2003, and Woodman’s surrealism provided me with a lyrical counterpart to René Magritte’s poetically banal imagery. Wrong-headed, probably, but I seem to respond to the vaguely familiar at least as often as I do to the totally new.

Reading a new book about Woodman (1958-1981), written by Isabella Pedicini, has incrementally boosted my fondness for Woodman qua Woodman, however. Francesca Woodman, the Roman Years: Between Flesh and Film has helped me appreciate the artist as a character out of Henry James–a vibrant young American abroad, filled with a sincere and somewhat naive faith in the singularity of her personal experience of place. Whether Pedicini intended to do so or not, her book makes it apparent that Italy and old-school surrealism had a seemingly unshakable influence on Woodman. So much so that one commentator, in the book’s epilogue, suggests Woodman would have been much happier (and still alive?) had she stayed put in Rome and not returned to the United States and New York to pursue a career.

Pedicini presents Woodman as a fledgling photographer in Rome during the years 1977 and 1978. She was the precocious daughter of two artists: George Woodman is a painter and photographer who taught for several years at the University of Colorado in Boulder, and Betty Woodman has acquired a surprisingly high profile for ceramic works that derive from Picasso and Matisse. Woodman summered near Florence with her parents, experienced both private prep school and public high school, and took her undergraduate degree in studio art at the Rhode Island School of Design. Fluent in Italian, she became part of a circle of anarchistic intellectuals involved in the Maldoror bookstore in Rome; they, in turn, appreciated Woodman’s use of her body as a performative instrument and of the camera as a sort of space within which her performances were crystalized.

Such a life seems enviable, even charmed, yet Woodman’s ended abruptly in suicide within three years of her departure from Rome. Pedicini doesn’t dwell on the artist’s death, but on Woodman’s devotion to work and her gioia di vivere. Details of factors that might have contributed to Woodman’s fatal depression must be found in other sources, which mention genetic predisposition and a series of relatively minor setbacks, including a rejected grant application to the NEA. Other sources, too, document development of interest in Woodman’s pictures and a first, monographic exhibition in 1986-88, which travelled to several important academic galleries around the United States. Currently, her photographs are the subject of a traveling exhibition organized by the San Francisco Museum of Modern Art and recently presented at the Guggenheim museum in New York.

Quite apart from the cryptic allure of Woodman’s pictures, I can’t stop thinking about the intensity of her demands upon herself and the all-consuming nature of her career expectations. The fact of her burning ambition makes it almost pointless to ask whether Woodman was being realistic and the fact of her suicide makes it seem immoral to ask that question at all. But I have to wonder.

Was Woodman simply too young to be making art that would “make it” in New York? One wiser head than my own has suggested that Woodman, with only a BFA, hadn’t matured as an artist: her personal vision hadn’t been tested by the rigors of a good graduate program in studio art, which makes sense. 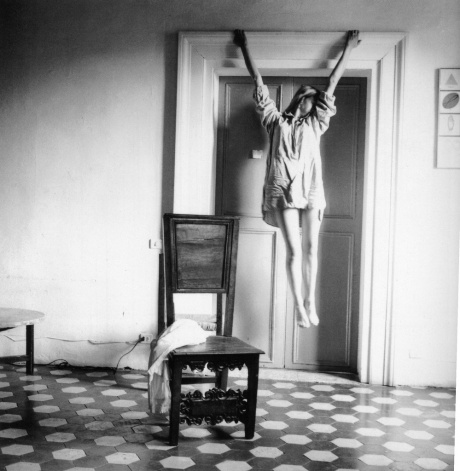 Then there are points of contact I see between Woodman and Cindy Sherman, who did complete graduate school and was about three crucial (see above) years older than Woodman. For instance, four images from Sherman’s Untitled Film Stills were featured in Metro Pictures’ inaugural show mere months before Woodman killed herself. According to reviewers of Sherman’s own, currently touring retrospective that early series is the best work that Sherman has produced. Sherman’s neo-conceptual art entered the cultural timeline articulated by philosopher George Kubler at an auspicious and appropriate point: Sherman’s pictures made it because it was time for them to make it.

Extending Kubler’s rationale, it wasn’t time for visual culture to recognize any relevance in Woodman’s romantic, humanistic imagery. In her turn, Woodman might not have been ready or able to be, as it were, timely. Would grad school have knocked the romantic surrealism out of Woodman’s art, made her into more of a Pictures Generation artist–akin to Sherman? Would it have given her a more realistic set of career expectations? And where in the shape of time is Sherman–who pushes herself to remain relevant–now that an entry point has opened for Woodman’s imagery? Will time squeeze Sherman out until another gap opens for her work to be re-recognized?

Engagement with and indifference toward artworks have resulted in the seesawing of artists’ reputations for centuries although, apart from the obvious example, I’m not sure how often the ups and downs lead to suicide. But it’s tragic that our current era of contemporary art could not find room for an artist in her own lifetime, and that such an artist gave herself so little time and so little room to realize her ambitions.

Janet Tyson is an art and cultural historian living in Spring Lake, Michigan.

A great article. I came to discover and love her work via the recent exhibit at LACMA (“In Wonderland”). I don’t know how I missed her photos (having come to Surrealism in 1997) but I’m glad I found her. It’s so tragic that she died so young. Her work is simply stunning.

Thanks for the positive feedback!

whats the name of the first picture?