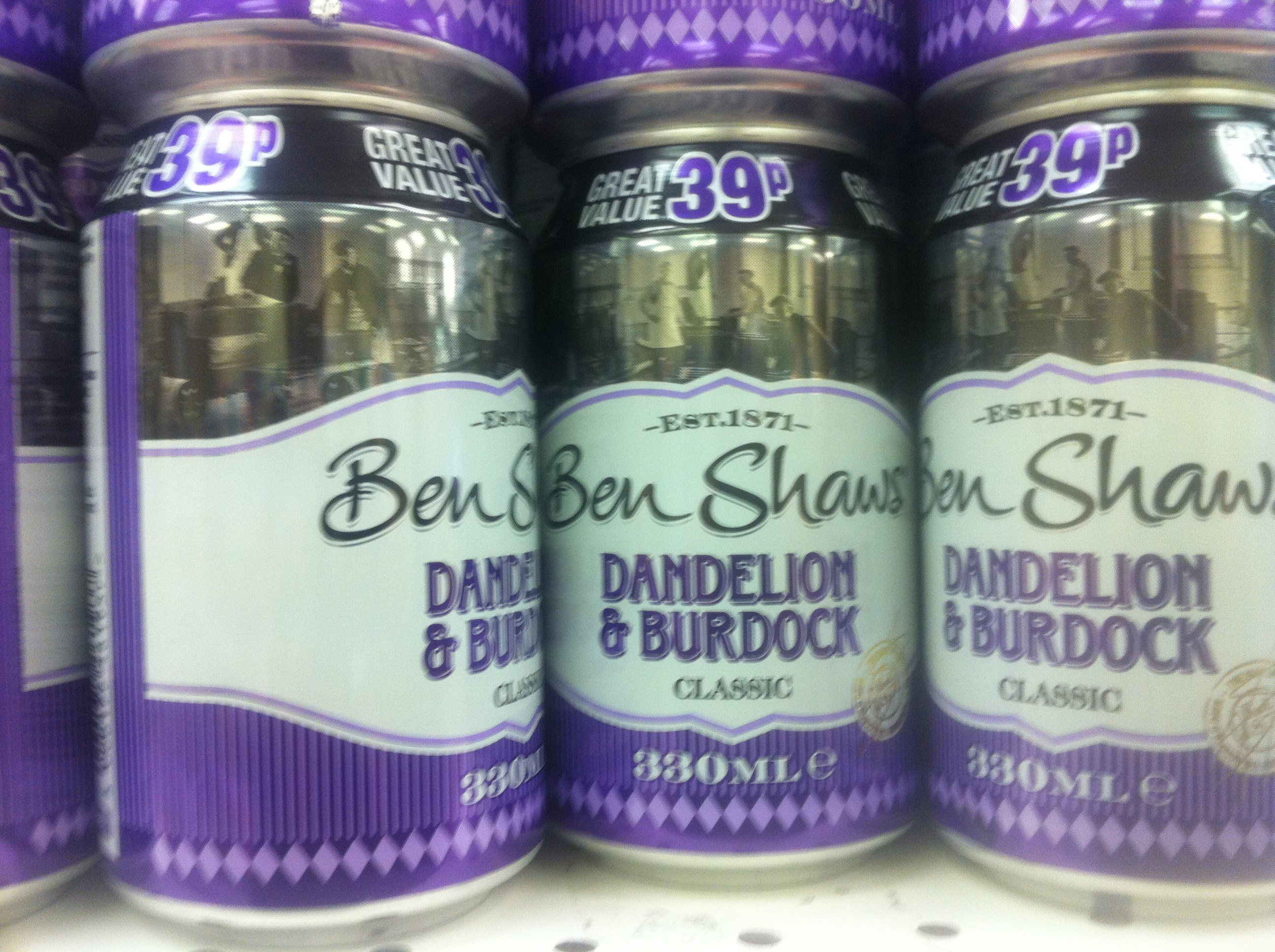 Fun to look at, thanks to Andy Warhol, but I’ll be darned if I’m about to drink the stuff.

This is an epic year for England. Well, for the UK, but mostly England. The Diamond Jubilee. The Olympics. The Tories sinking ever deeper into their own doo doo. Titanic’s centennial and Tate Modern’s full-dress survey for Damien Hirst–the artist’s first in his native land. The YBAs turning 50.

I haven’t made all of the actual events, but certainly feel the reverbrations. Tube lines shut down for Olympics-related testing. Multi-color dots seemingly everywhere. Hoards of people patiently queuing to see David Hockney at the Royal Academy–voting with their feet, so to speak, for the older, working-class Northerner who made it big in the art world. 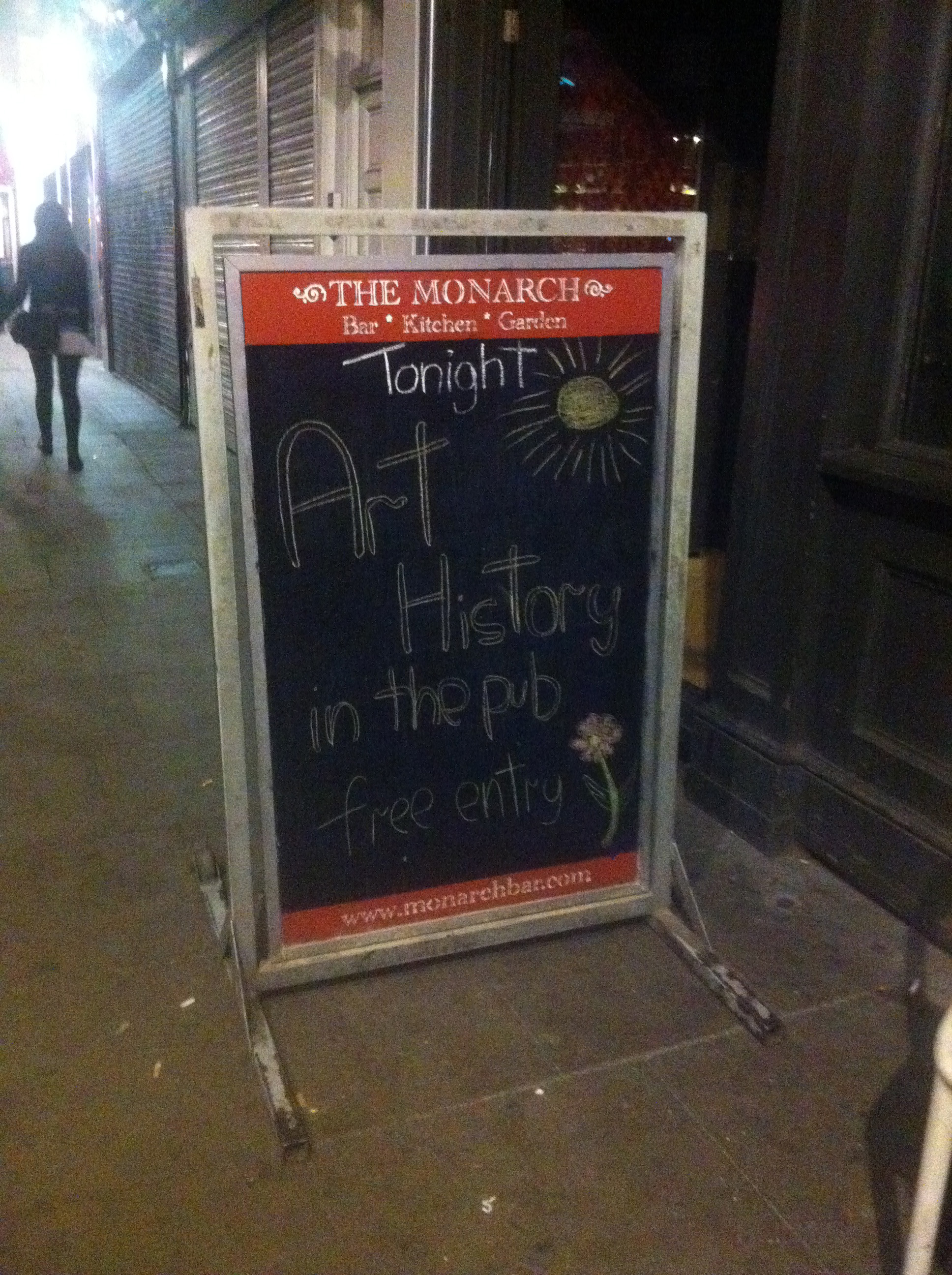 Art history lectures at the Monarch in Camden Town have been arranged by the Association of Art Historians.

So far I’ve seen Hockney, Nicholson and Mondrian at the Courtauld, have lectured on surrealism to preppies at an art academy in Buckinghamshire, spent hours with Early Netherlandish paintings the National Gallery, seen my first-ever play in the West End and, of course, have walked my feet off.

I’ve also picked up on Art History in the Pub. This is a series organized by my colleagues at the Association of Art Historians to help the public understand what scholars do. Sort of an offset to the idea–thanks to Kate and Will–that art history is for people who don’t have to work. It’s presented at The Monarch in Camden Town. Topics tend toward the pop-cultural. The one I heard was about Vargas and Petty girls, but others have covered topics from buttons to tattoos. 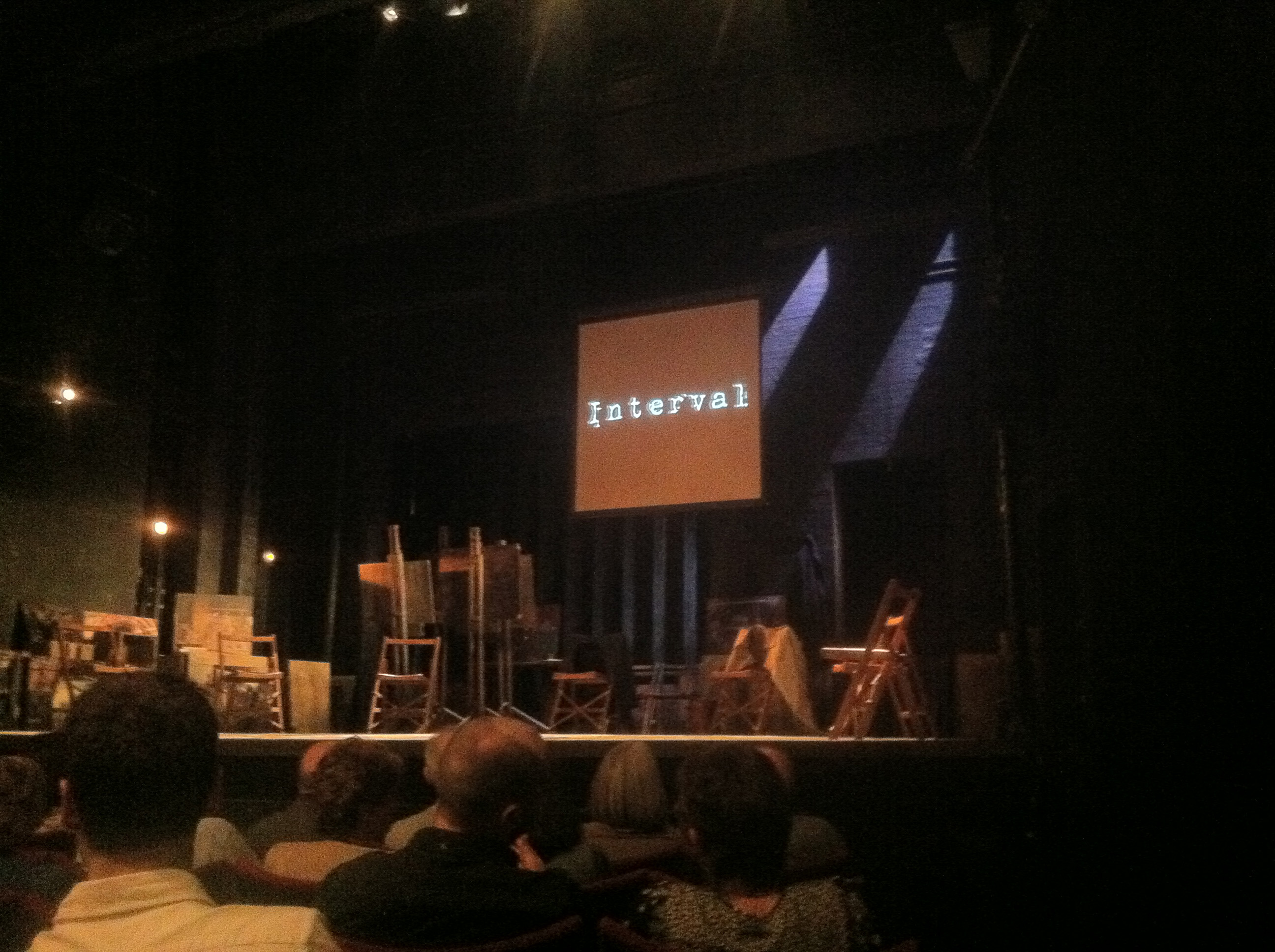 Shouldn’t have done it, but I took this picture during intermission. The set was the undressed stage. It was beautiful!

I also saw Pitmen Painters–script by Lee Hall in 2007, based on research by William Feaver, art critic for The Guardian. It first was produced at the National Theatre, but I loved seeing it at the intimate Duchess Theatre. My first West End play! Pitmen Painters is set in the 1930s near Newcastle. It concerns a group of coal miners who take an art appreciation class and end up making paintings. They keep their day jobs, though, along with their working-class status. Hilarious,  insightful and poignant. Buy the script and read it. At the end, my friend Barbara and I went out front and encountered most of the cast, who’d come out the stage door, right next to the main doors. We talked with the two principal actors, Trevor Fox and Ian Kelly. 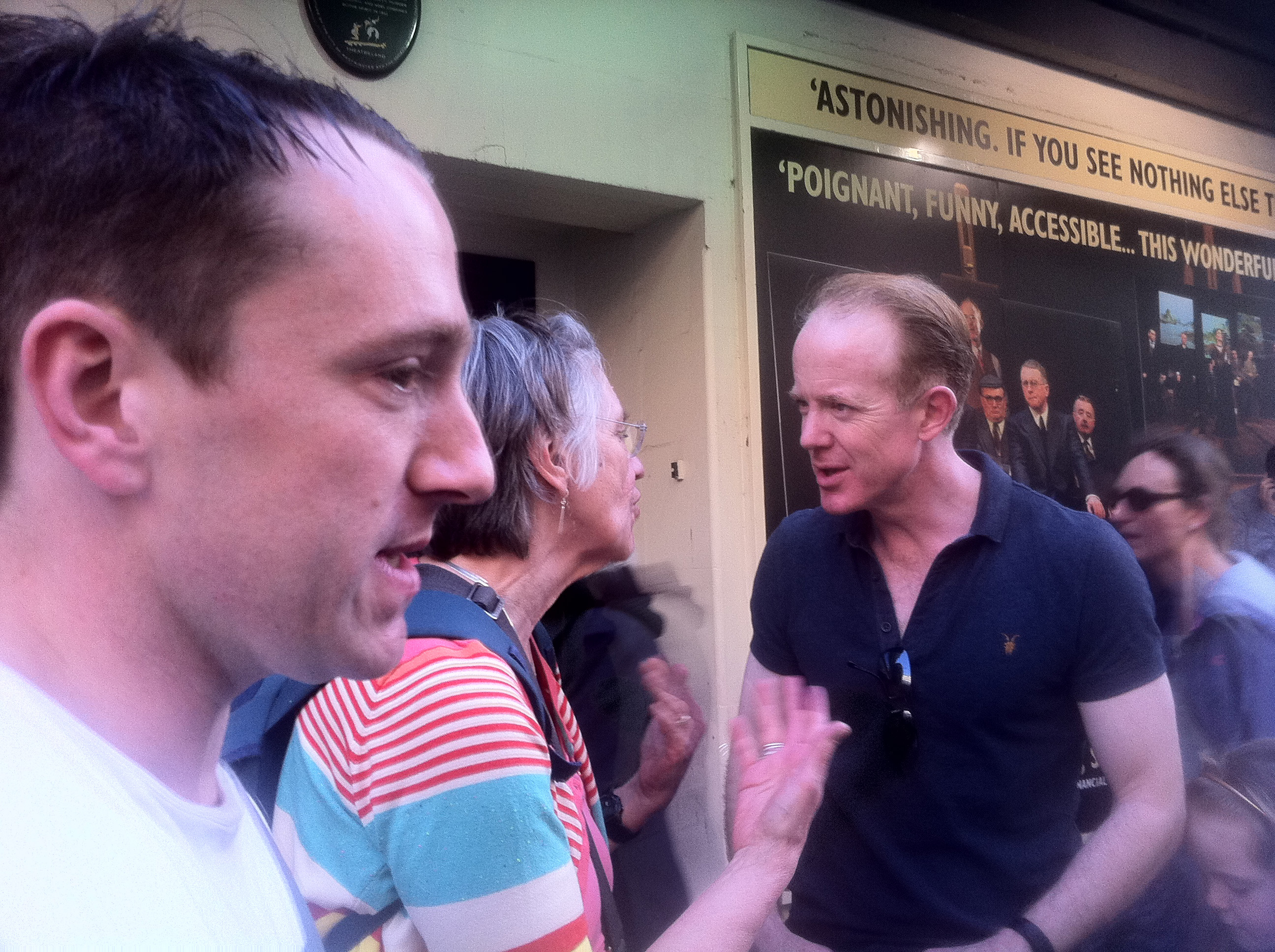 Meanwhile, out in Trafalger Square, it seemed as though the whole world was there to bask in some amazing March sunshine. Also loved the current Fourth Plinth sculpture: disarming and playful, until you consider the implications. Then it’s devastating. 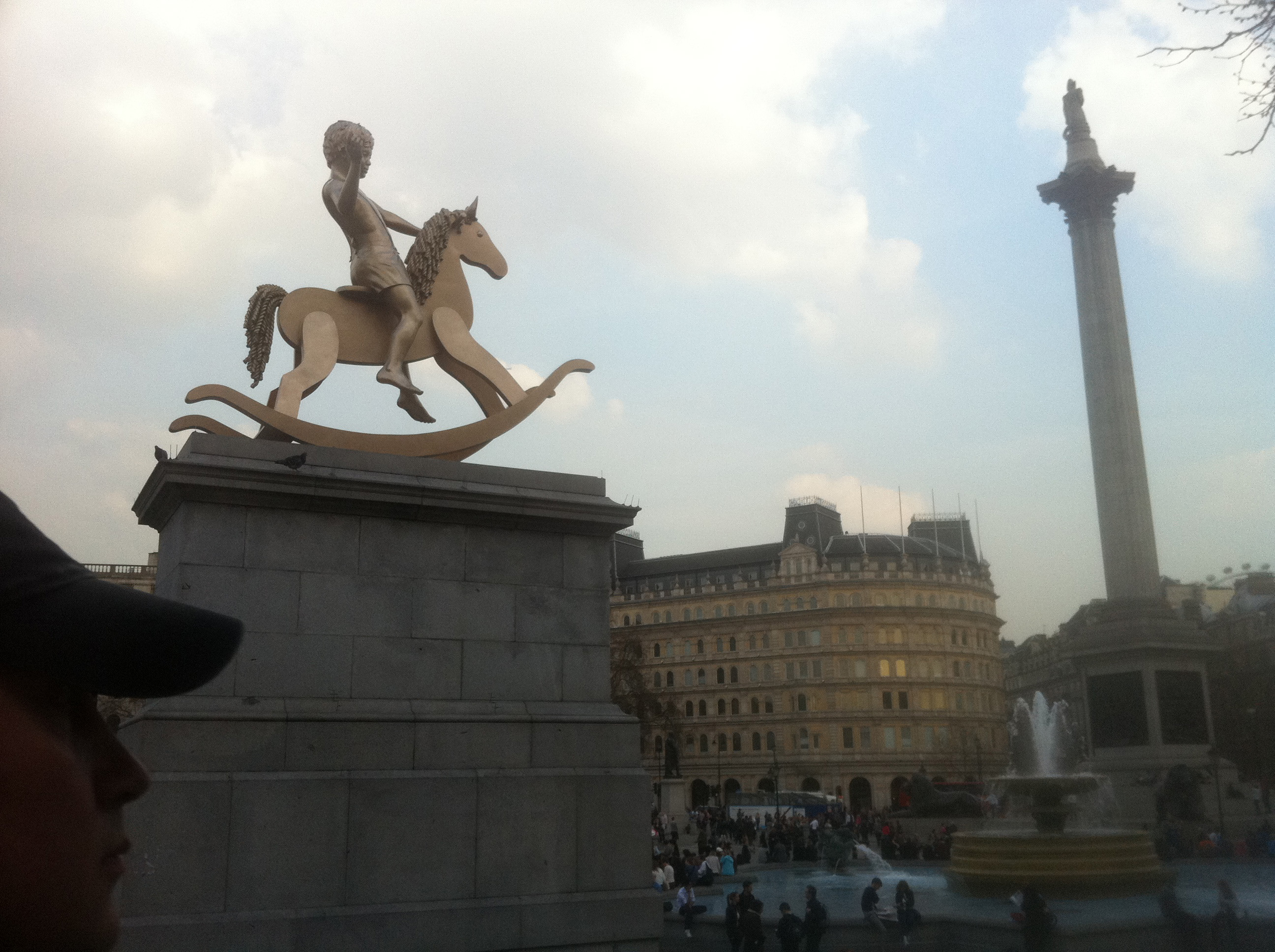 ‘Powerless Structures, Fig. 101’ by Elmgreen & Dragset, aka artists Michael Elmgreen from Denmark and Ingar Dragset of Norway. It stands on a plinth, set in 1841 for an equestrian statue of William IV.

Other Fourth Plinth Project scuptors include Mark Wallinger, Rachel Whiteread and Antony Gormley. Wallinger inaugurated the project in 1999 with a lifesize cast of a male figure, crowned with thorns and called Ecce Homo.  Gormley’s project consisted of hundreds of different people taking turns doing what they wanted to do, on top of the plinth. 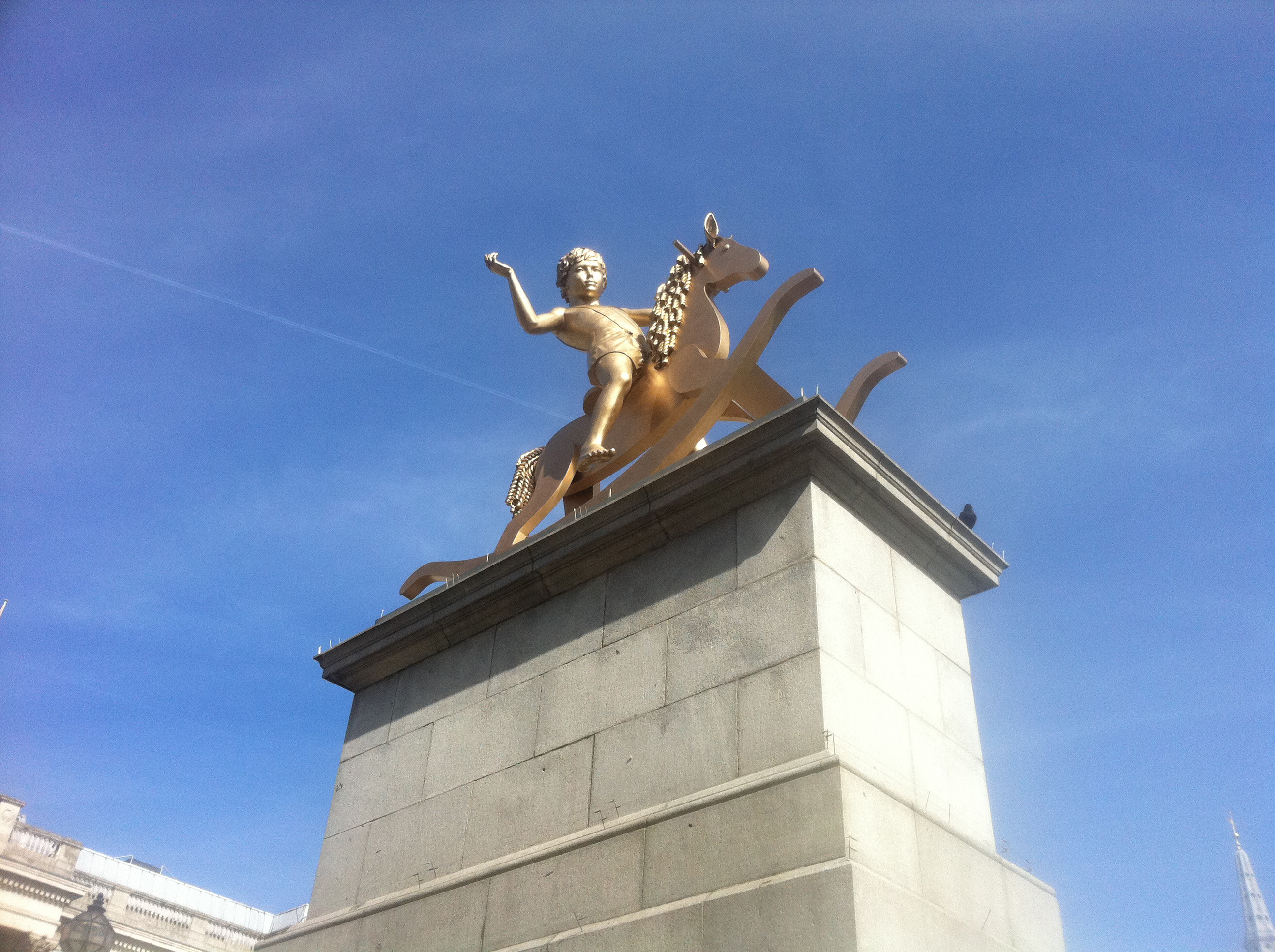 Another view of Elmgreen & Dragset’s work.

Also visited some artists’ studios, including one where my painter friend, Steve Simpson, works. A weaver working in the same building tipped me off about Gavin Turk’s new exhibition. Turk is doing his own turn on Boetti’s embroideries but, instead of having them made by Afghan women, commissioned inmates in British prisons through a program called Fine Cell Work. The Boetti exhibition at Tate Modern is somewhat overshadowed by Hirst retrospective. Saw more Hirst, of course, at the Saatchi Collection, along with several, more interesting installations. 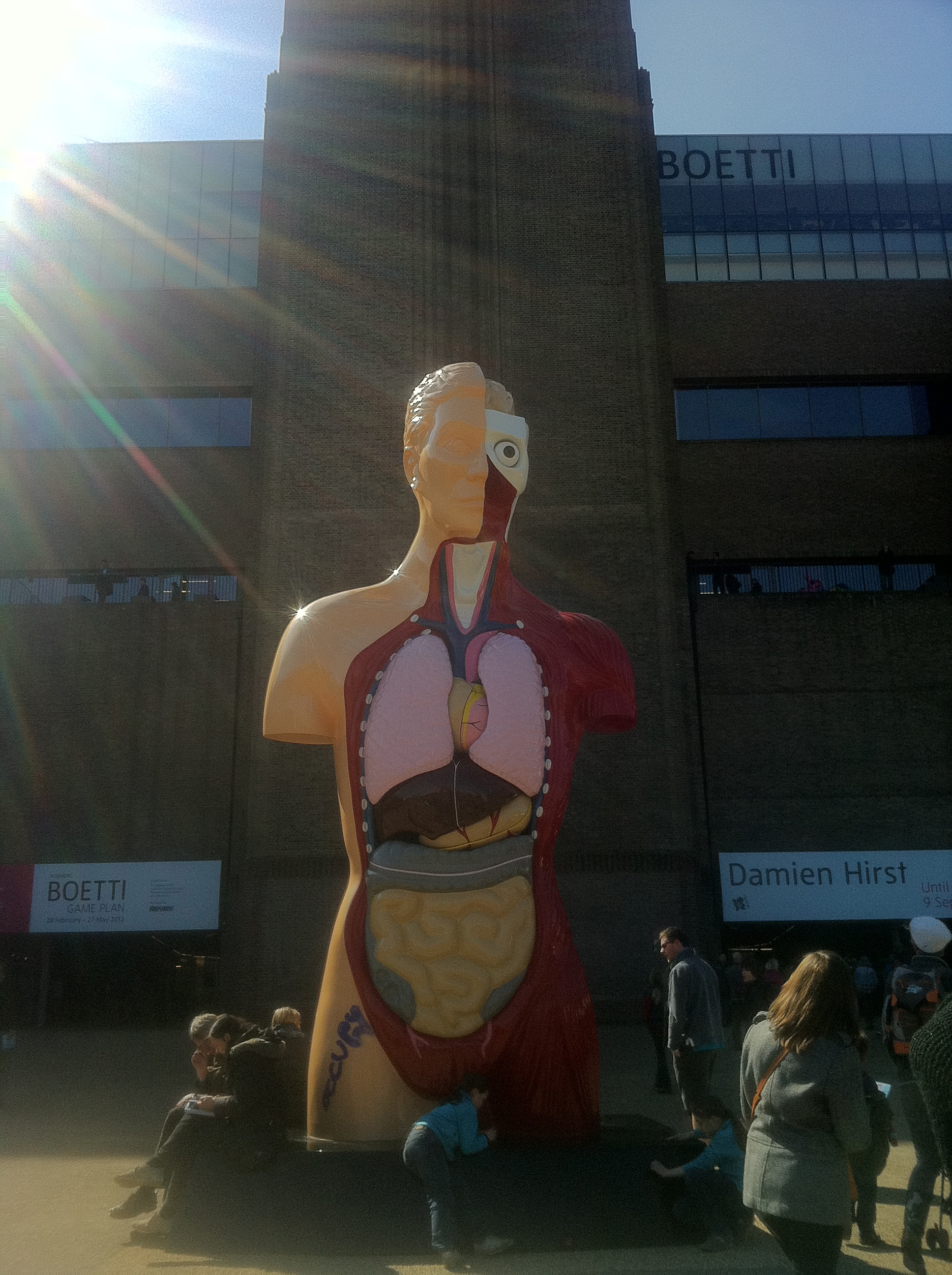 The other, dreadnought-class exhibition was for David Hockney’s paintings on canvas and works on paper (including iPad prints) of scenes from around his home in Yorkshire. Barbara loves Hockney: has ever since she moved to London more than 40 years ago. The exhibition had a bit of an edge, but mostly seemed to reflect reconciliation with one’s identity. Not such a bad thing. 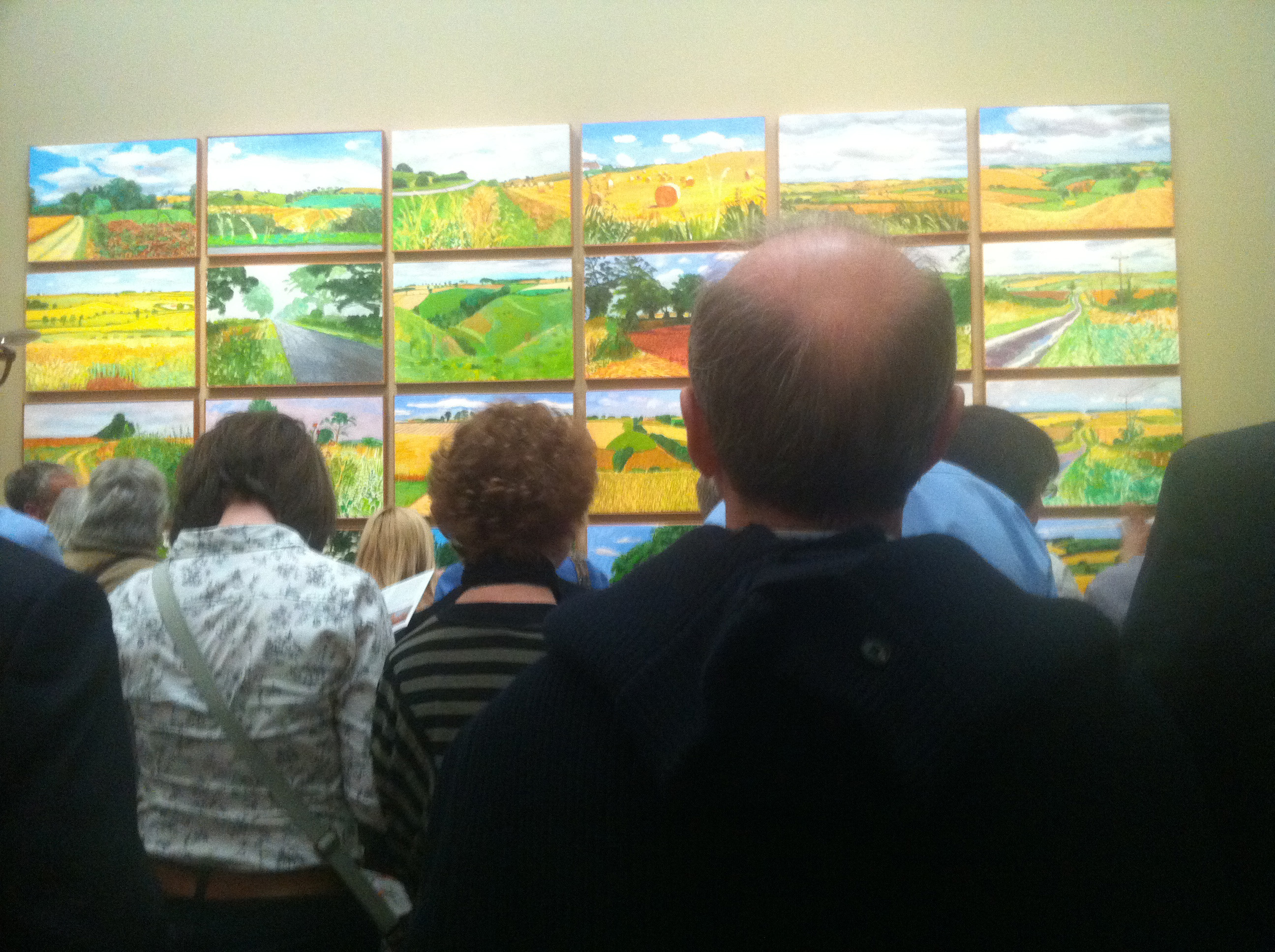 Between Pitmen Painters, Hockney, Hirst and Turk, the leitmotif seems to be that of artists coming from the working class. It makes me wonder how many of the more successful American artists come from that economic background. The shared social class experience of most if not all YBAs is addressed in Jeremy Cooper’s new book, Growing Up: the Young British Artists at 50. I need to read it. 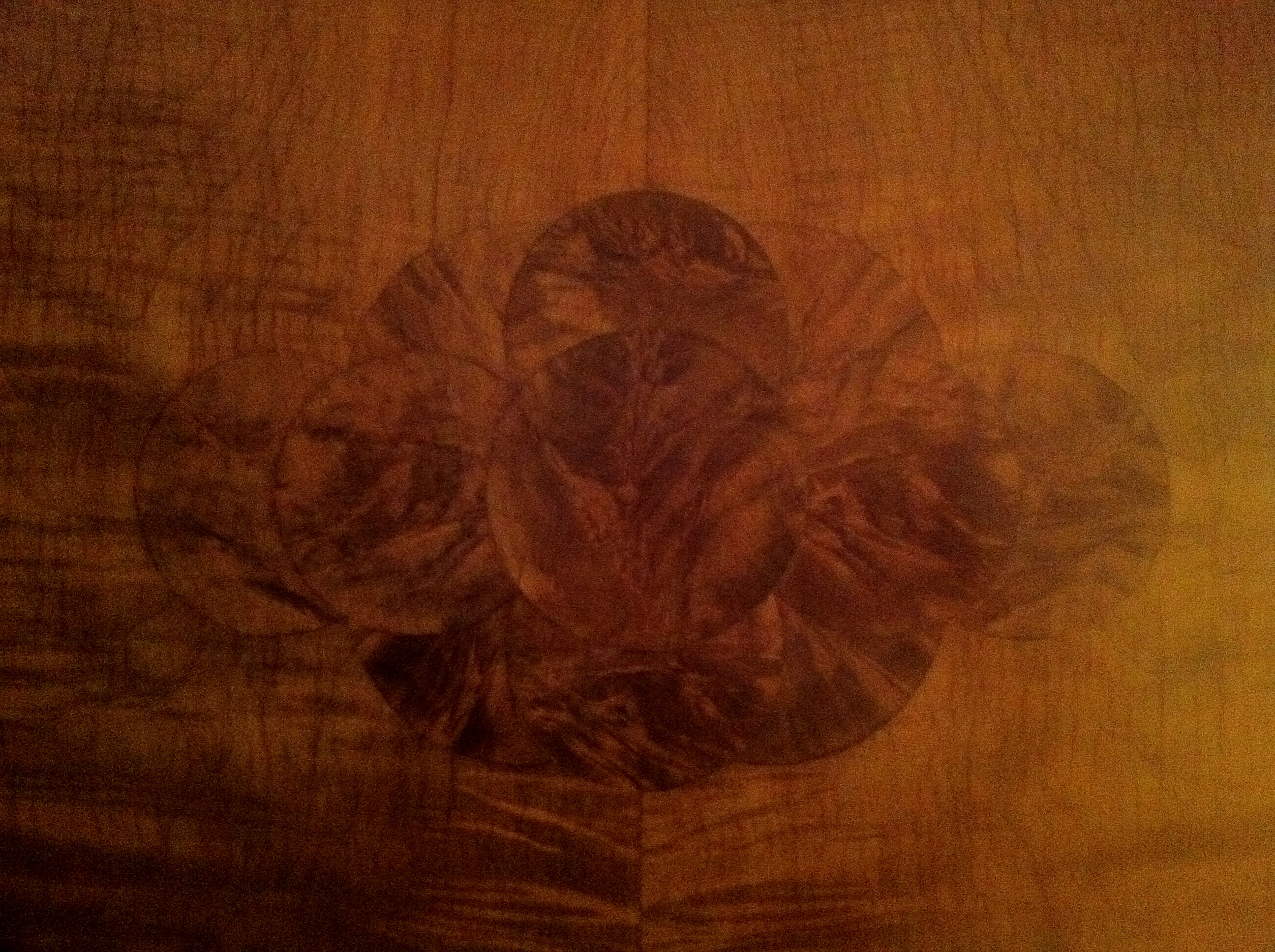 Detail from a door to one of the toilet stalls at Claridge’s, where I stopped for tea, sort of enroute to the Saatchi Gallery. 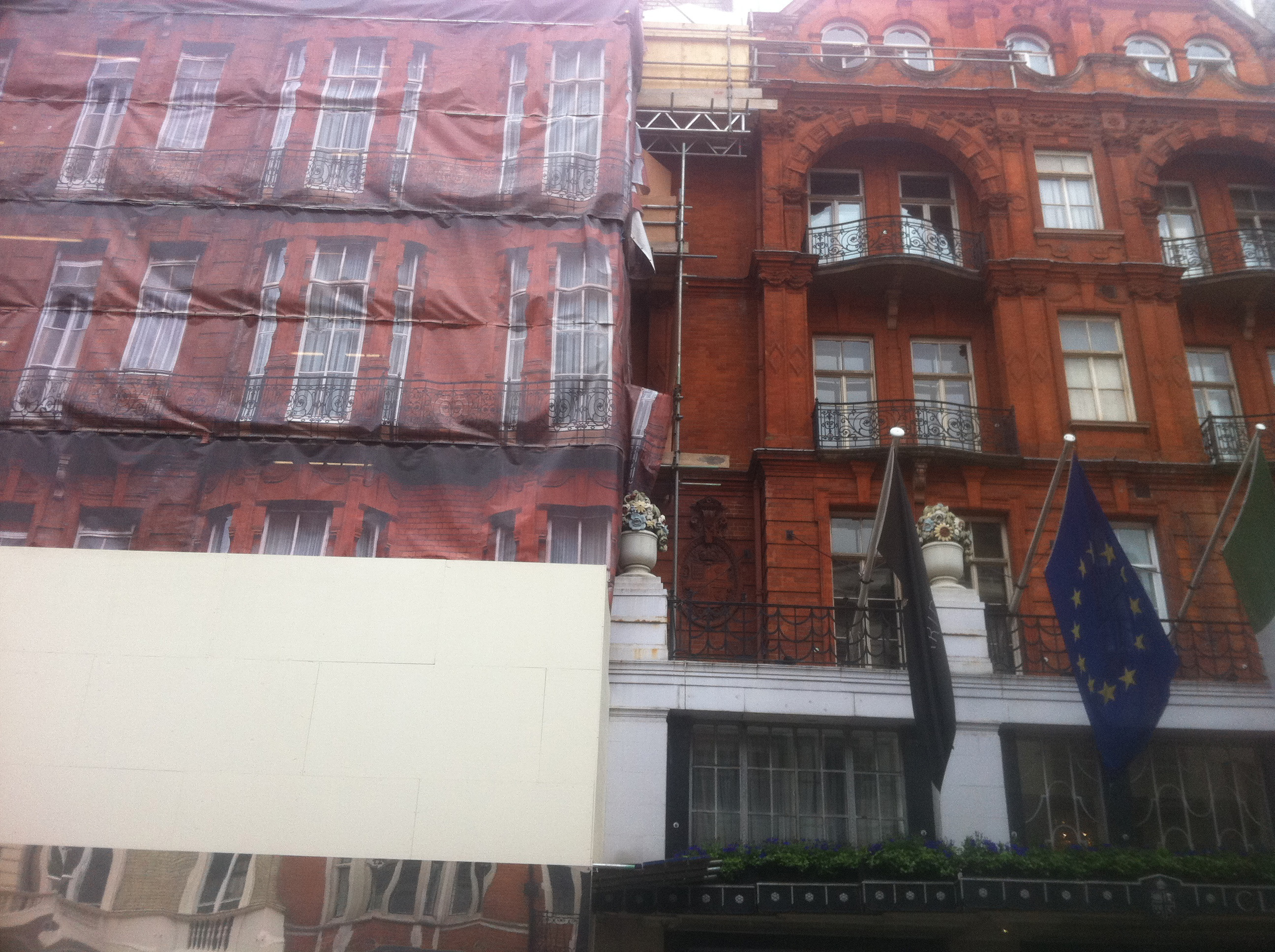 Some remodeling or something at Claridge’s.

Also rode the Docklands Light Rail out to see the Thames Barrier. A marvelous sculptural installation in its own way, it is located at the Pontoon Dock stop. Enroute, I could glimpse Anish Kapoor’s ArcelorMittal Orbit for the Olympics. Thames Barrier Park turned out to be the real attraction. Great playgrounds, a cafe and a hedge garden that kids were running through like crazy. Anyway, not sure if any of this makes sense, but I’m stopping with the hedges. 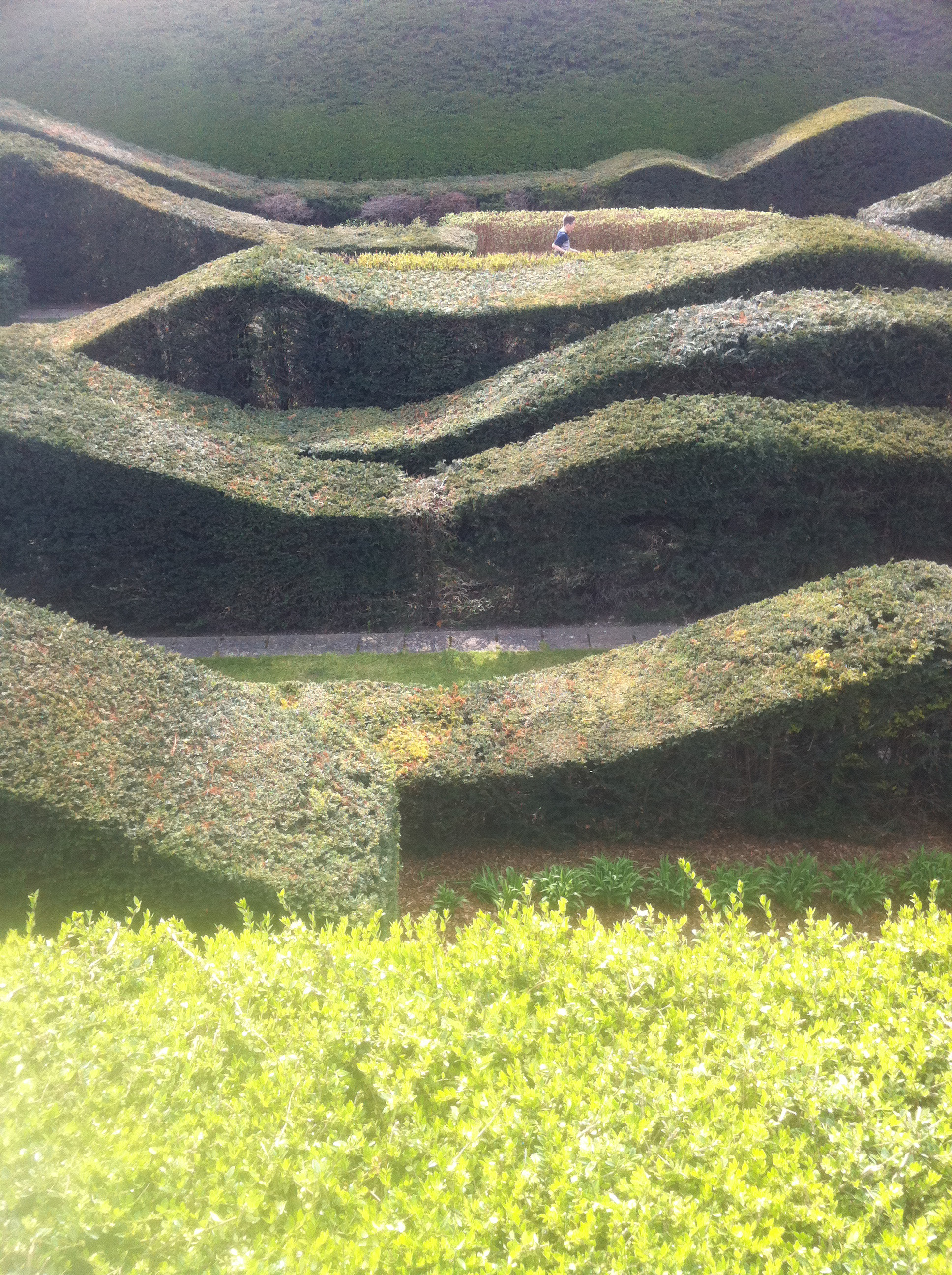 The Art of the Olympics