Now with two art fairs under my belt, not only does it really hurts when I sit down, but I have also become the world’s leading authority on ALL THINGS ART WORLD, and having established my authority as such, will share with you my observations on Houston’s latest contribution to the genre, the Texas Contemporary Art Fair

If you want to preserve your memories of each and every art fair you visit over the years, it’s a good idea to take plenty of pictures.  When you print out or digitally save all the images, make sure you label them according to the particular art fair of origin. Otherwise you will never be able to distinguish one art fair from the other.

I tried to take lots of photographs at the Texas Contemporary Art Fair, but unfortunately for you, and me my dear readers, I can’t take a focused photograph to save my soul. 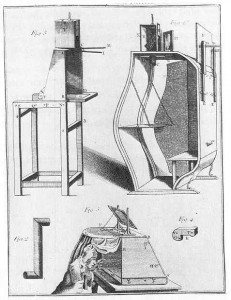 Maybe I should consider purchasing a smaller camera.

My hands shake so when I pick this one up. 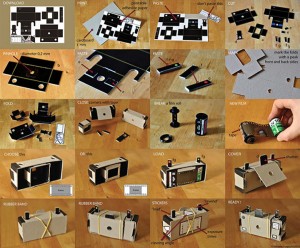 But then again, maybe my pictures were out of focus because you have to have a fucking PHD in Cameraology to read these goddamn directions.

If you are manning a booth at the art fair, remember the core root of the word manning is manners. Don’t be rude to someone just because they are dripping in sweat and not diamonds. Just because someone does not currently have the financial means to buy art, doesn’t mean they never will.   Plus, Lady Whose Name or Gallery I Will Not Mention Because I Obviously Was Brought Up Better Than You Were, if you think the only people who should be allowed to look at and ask questions about art are the rich, then you’re in the wrong business and have no real understanding of art at all – at least art in its truest sense. 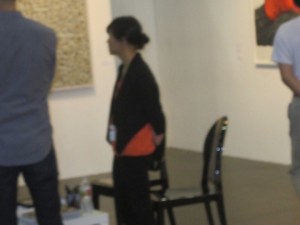 It’s at times like these that I channel Joe Mantegna and Mandy Patinkin in their shared role as the Senior SSA on Criminal Minds, and start quoting Tolstoy:

Art is …  a means of union among men, joining them together in the same feelings, and indispensable for the life and progress toward well-being of individuals and of humanity.

and not just  a way for you to get another pair of Jimmy Choo’s.

Conjugate with me: Manning, Manners, Soul.

Truth be told ninety-five percent of all the gallerists and artists I spoke to at both art fairs were the nicest, most accommodating people you could ever meet, even though whenever I use the word gallerist I feel like kicking my own ass for being so pretentious. 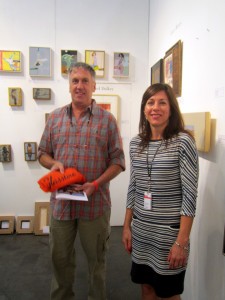 Kelly Purcell of Paul Thiebaud Gallery in San Francisco is an example of a genuinely nice person.  Kelly knows me not from Adam, and yet, unprovoked, she up and gave me the most beautiful Wayne Thiebaud catalog of charcoal drawings you could imagine. As fate would have it, I had planned on basing my next drawing assignment on Thiebaud’s drawings, very few of which I had been able to find on the internet.  Kelly’s simple act of kindness not only made me happy, but might also end up inspiring some future artists as well.

Did you know that apparently there are hundreds and thousands of world renowned galleries and artists I have never heard of?   There are.  Up until last Friday, I never even imagined there was such a thing as the Lennon, Weinberg Inc gallery in Chelsea or that an artist named Peter Soriano even existed.  Of course up until last week, I also had no idea that you are not suppose to swallow the toothpaste after you brush your teeth.

As I wandered up and down the aisle of the TCAF, I was especially drawn to the Lennon, Weinberg Inc. exhibit, which was by far the most “throwed” looking booth at the fair.  Their featured artist was Peter Soriano, of world-renowned fame. 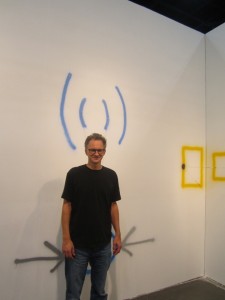 Peter’s work is conceptual and is constructed from a combination of three-dimensional pieces (pipes, pulleys, gears) combined with two-dimensional elements (spray painted arrows, x’s, boxes, parenthesis, etc.).  I asked Peter to explain his sculpture/drawings or scrawpings to me, but regrettably I quit listening after he flailed his arms around, jumped in the air, and then said something about “getting from this side to that” and instead I obsessed about whether or not I had developed a tumor on account of swallowing all of that Crest.

However, as a matter of fairness and clarity’s sake, I will attempt to describe Peter’s work.  Lets say you were designing a machine, and you didn’t have all the parts, so you took the parts that you did have and stuck them in the wall in order not to trip over them while you paced around trying to figure out, by means of a can of spray paint: A, The mechanics of the piece; B. How to get enough money to pay for the piece – only instead of this happening in your garage and your spouse yelling at you to clean up your shit, people wrote long articles about you and gave you money. 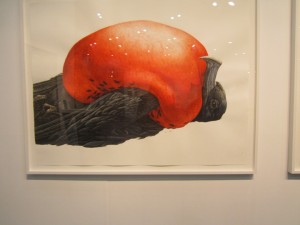 “I” said the open ocean plastics

For thousands and thousands of years people have made drawings and paintings and sculptures of animals, and then as is now, the rendering of the animal was much more than just a mere act of depiction. In ancient times, perhaps you painted the animal because you saw the animal as a godlike creature, something more powerful than yourself, or you painted the animal in order to gain control of the creature before you went out on the hunt.  During the Romantic period, artists such as Delacroix and Stubbs saw animals as a metaphor of nature and powerful emotions.  In the 1960’s Robert Rauschenberg’s goat was said to signify homosexuality and Joseph Beuys’ dead hares were used “to elevate the status of animals to that of humans.”  Nowadays people continue to incorporate animals in their work as signifiers of environmental disaster or cloning or corporate greed.  There were many such examples of this current trend at the Texas Contemporary Art Fair, including the work of George Boorujy, Walter Robinson, Vik Muniz, and Sugar the Miniature Horse.

Yes, you heard me, I said Sugar the Miniature Horse.

While many of you may consider Sugar as nothing more than a sad tabala rasa subject to the whims of screaming birthday revelers or unimaginative art fair attendee, she truly is an artist in her own right.

Technically speaking Sugar does not incorporate animals into her work, as she herself is an animal.  However, like many of the aforementioned artists, Sugar’s site-specific works take on a wide range of current issues including intellectual puffery among the cultural classes, Wall Street machinations, and religious and political hypocrisy.  Her latest series, “Step in This” dares the I-Me Phone generation “to quit fucking texting your friends, and start paying attention to the world around you.” 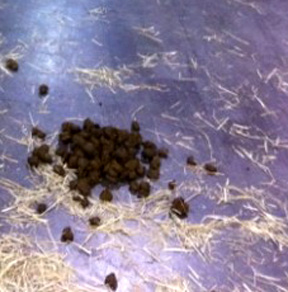 From the Series Step in This by Sugar the Miniature Horse

I asked Sugar if her ploy had worked and she relied in the negative. “ People are so isolated these days, and my intention was for them to put down their phones, clean off their shoes, and start interacting with others.  Unfortunately my attempt to bring together the masses backfired on me. When you smell like a load of horseshit the last thing somebody wants to do is interact with you. I am still tweaking the concept.” 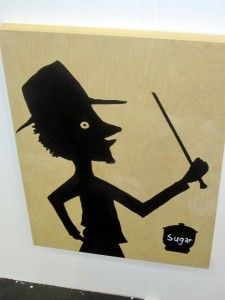 There is a lot of copying going on at the Art Fair.

I have been guilty of copying other artists before. When I got out of art school, I felt so beaten down and insecure about my own artistic skills that I copied old engravings of animals for an entire year before I felt confidant enough to venture out on my own. For a while there in the last decade I was copying portraits from old master paintings, partly out of lack of any better idea, which is clearly evident when looking at the work..

Examples of Mimetic artist at the TCAF include Chris Jordan of Kopeiking Gallery, somebody whose name I misspelled, and Deborah Grant of Steve Turner Contemporary.

Jordan’s work was interesting during the one second that it took to inform me his copy of Van Gogh’s Starry Night was collaged from images of lighters.  The somebody whose name I misspelled appeared as though she’d been looking at Shirin Neshat’s work so long, that she started thinking it was her own.  Deborah Grant’s attempts at mimicry made me the most annoyed because she copied my hero, Bill Traylor, whom I consider among the top ten best artists this country has ever produced.  (You can currently see Traylor’s work in the Menil exhibition Seeing Stars: Visionary Works from the Collecion.) 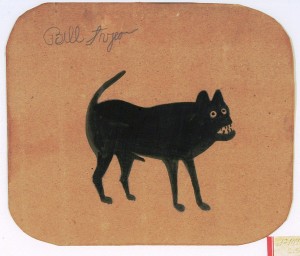 Traylor was a former slave, and did not start making artworks until he was well in his 80’s.  Untrained academically, and working with the most humble materials (cardboard, crayons, colored pencils) imaginable, he made aesthetically perfect works of art, beautifully composed, lyrical in their execution, relatively small, but packed full of life and spirit. None of these qualities are evident in Grant’s staid, boring copies I saw at the fair, and yet, where as Traylor may have been given art supplies or a dollar or two for his works during his life time (not to mention how much the dealers are making on his work today), Grant’s lazy search for a subject sells for four and sometimes five figures.

Every season, during American Idol, at least one of the contenders will take on a seminal classic of a musical icon, and more often than not, are warned in advance how dangerous such an undertaking is and when they fall short of the original, are chastised for being arrogant enough to think that they could better a legend.

Visual artists would be wise to take heed.

In closing I am going to leave you with Plato’s words on imitation and the arts, as well as a Chris Crite’s painting based on a criminal mugshot from the 1930’s. 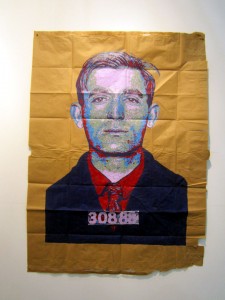 Here are three beds, one in nature, which is made by God, another which is made by the carpenter, and third by an artist. … The painter may be more properly described as the imitator of what the other two make, … and he can paint any artist, although he knows nothing of their art, and this with sufficient skill to deceive children or simple people.

Sounds awful and poorly written. Good thing Glasstire is edging towards becoming a Dallas-based blog; then I won’t have to even pay attention a little.

Sean, where have you been? I have missed your comments ever so much.

Beth, you and Sugar should just eat a chocolate M&M and be done with it!

Wow!!!!!! So funny. You are a strong black woman. My beautiful Beth.

Yes, yes, nice gallery people for the most part, whether or not the art appealed. Didn’t get that Grant was ?inspired by? Traylor till checked her on web, psbly getting older will help. My son, who played one of the parties, felt sorry and embarrassed for Sugar–he will be so pleased to know that she has her own voice and is the creator of ‘Step in This’. Who did kill the friggin’ bird?