Yesterday while thumbing through my book shelves I came across a number of great little exhibition catalogs. One from back in1997. After some browsing, in an effort to be fair, I opened my internet browser and went through my bookmarks. Since these are the internet equivalent of a bookshelf, I clicked back to 1997. But sadly the bookmarks were busted, their links long having succumbed to digital decay. Draw whatever conclusion you’d like from that riveting tale, but suffice it to say I went back to the books pretty fast.

‘Print is dead!’ echoes the familiar refrain, while meanwhile the book and paper crowd stares longingly into their coffee while lamenting the loss of ‘feel’ and ‘smell’. After all, there is nothing quite like the sweet perfume of a musty book. Print is as dead as painting, which translates roughly to some mishmash of: in perpetuity and not at all. Have you seen the glut of abstract painting lately? Printed matter may eventually go the way of the cassette tape, a rarefied fetish object, kept on life support by artists and fanboys, but I’m doubtful it’ll be in my lifetime. But alas, everything is louder on the internet; our customizable 21st century manifesto. There is a lot of shouting into the digital void. As a result news seems a little more dire, and arguments a little more melodramatic than necessary. Web jockeys and print snobs will clobber one another with heated rhetoric until the sun expires, while the reasonable enjoy the middle ground, where print and the web share a whiskey.

I wonder if stone tablet aficionados had similar arguments with the paper gurus?

Since I fancy myself an ‘artist’ who makes objects, I readily admit to having a soft spot for books, exhibition ephemera, records, and other objects. A vinyl record adds tangibility to the act of listening, scribbled notes in the margins of a book a sense of history. It reveals that these objects are not simply carriers for content but incorporate additional sensorial experiences. That sounds nice, score one for the neo-Luddite sentimentalist’s! Truth be told, I hate that sentimental hooey and I’m no fetishist, but there is a nugget of truth in that idea, and my flickering screen is having a rough go at convincing me otherwise. Pressing the spacebar to stop and start iTunes just feels so empty, and I am getting funny looks for sniffing my keyboard. 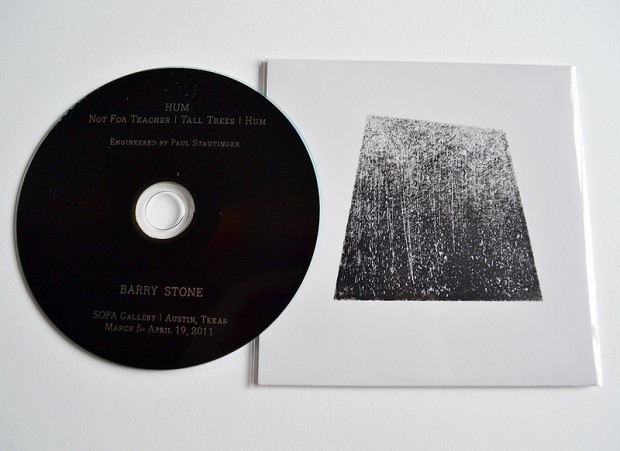 Barry Stone at SOFA Gallery, circa 2011.

Nostalgia fueled fervor for print history aside, I wonder what we lose through the increasing virtualization of what used to be printed? Attention and retention? Simply a tangible record of an exhibition? Dusty books on shelves? The benefits of the web are obvious. Gutenberg himself would undoubtedly rejoice in its presence, and the possibilities it epitomizes. I am right there with him, but blind faith was never my bag. We know that without care books will rot, but what happens when the virtual decays? I know, embrace the ephemeral, dust in the wind, yada yada. I have a book from the 19th century but my bookmarks from 1997 are already defunct, and frankly, that makes me a little nervous.

The challenges of archiving digital materials (a paradox, right there) are ongoing, huge and frantically being addressed by hundreds, likely thousands, of information specialists. The Internet has its uses, but I don’t for a minute or even a nanosecond believe that digital content will completely supercede content that is presented via some kind of concrete platform.