Would Van Gogh be Making Apps? 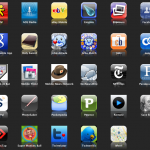 I took a little hiatus from writing about art because I needed to sort out some thoughts. I have not been visiting gallery shows or museums recently because I have been tired of the quality/crap ratio. On the other hand, I am in awe of all the cool things being made these days, they just happen to be outside of galleries and museums.

The title of this post is not really asking about Van Gogh the person, rather it brings up the question about what it means to live/work as a “maker” today. Artists are known for creating aesthetic experiences that others can consume. Of course, in modern times there seems to be a distinct line between fine art and commercial productions.

Sometimes the art world makes an attempt to erase this commercial distinction, like Lawrence Rinder’s Whitney Biennial, where he curated “any form of cultural production.” However, the art world always seems to return to a more traditional mode of celebrating non-commercial work more than anything else. The commercial nature of work is the line that keeps getting redrawn and this is not really a problem. In fact, I do see a distinction between big corporate productions and something made by an individual with limited means. The limitations are what make it special and human.

However, I have so many artist-friends whose only conception of their art is within the traditional gallery/museum context. Perhaps worse, their only conception of making money is teaching, which is a very over-saturated market. Many slave away years within adjunct positions working 40 hours per week, making only a few thousand dollars per semester. And often full-time positions aren’t that much better. There are so many other employment alternatives that pay more and help to build some longer term stability. Let’s look at this in more detail:

Making Art
First of all, I think some people need to get off their high horse and celebrate “making” in general.  Some things are easy to monetize, like computer technology. Other things are more difficult, like paintings. But I think schools (and the art world to some degree) inhibit artists from breaking out of these hard-to-monetize fine-art forms because they will no longer be considered “artists.” Well phooey, fear is no reason to avoid exploring new things. Of course, if one of these traditional forms is the passion, then that’s great too. But it leads me to my second point.

Making a Living
A good art education can potentially prepare someone well for this rapidly changing world. Being a self-starter, making new things, dealing with limitations, etc … these are all valuable skills to have in this new world. However, I am perplexed at the vast number of people pursuing the very few teaching jobs available. It seems like a lack of imagination. A similar problem is when people dispassionately pick a low-level job as if it is the enemy of one’s art, and therefore something very temporary chosen. Why not really pursue a job you could really fall in love with?

I enjoy stories like about artists who had day jobs doing something they enjoyed and had that experience end up contributing to their art (like Thomas Nozkowski). Working as the production director for MAD Magazine was his day job for many years while he made his paintings on nights and weekends. Great story. In fact, I have often thought about writing a book called “The first 5 years: The way famous artists made money their first 5 years after school.”

However, I feel like there is a culture of shame that makes artists feel bad about having commercial jobs. A job can potentially be a way to learn, research and inform your artwork.  And in some cases, the job may become the artwork. Otherwise known as “selling-out” or “quitting,” finding true satisfaction by making something in the commercial world should not be seen as a failure. Rather, it should be seen as expanding the tapestry of cultural production. And who knows what will be considered “art” a thousand years from now?

If you are fortunate enough to have a studio practice full-time, good for you. That is hard to achieve and the dream of many. I am curious to hear more stories about people who are making cool things, whether part of a studio practice or a job, or perhaps some balance between the two.

There’s nothing wrong with selling art, but making art to sell inevitably leads to sameness. In order to sell well, art (like any other merchandise) must fit into a pre-existing conceptual framework so that people will recognize it as something to own! That’s OK; some good art fills the bill, but it’s only a narrow slice of all that’s possible. If you’re happy working inside that narrow slice, you can sell art commercially, but if you step outside, you’re immediately in the rarefied province of specialists and collectors: the art world. There is no balance, no compromise, no middle ground. I’ve been looking for it for thirty years.

Agreed. Making “art” to sell leads to sameness and is the least creative solution of all.

Not that I do this myself, but certainly making art to sell can be the artistic statement itself, opening all sorts of possibilities of interpretation.

By the way, here’s an interesting blog by Van Gogh: http://www.vangoghsblog.com