…what living in the country means: It’s sitting in a little bitty
restaurant, looking out the window at a cow, but you only have powdered
creamer for your coffee.

As is often the case when you get around people who have gone to art
school or read art magazines or otherwise engage what is known in these
circles as “dialogue,” the concept of authenticity came to be
scrutinized as probably not possible in a world as mitigated as this one
surely is.

A quote was offered:

“Authenticity is unsustainable in a post-modern world.”

I didn’t catch who “originated” this cul-de-sac — any number of pomo
poster boys and girls could have. Besides, if I understand anything
about screwing in light bulbs, it doesn’t matter — if so and so hadn’t
said it, some other so and so would have soon enough.

The conversation was itself a mitigation within the walls of Women and
Their Work, where Karen Mahaffy’s The Persistence of Moment will remain
until September 2. The show gently reasserts the time Karen spent in a
place, Tallinn, Estonia, for five months in early 2009.

We were all there to discuss the concept of place, apropos the show and
everywhere else. Karen acted as moderator and was joined by San Antonio
Artist Chris Sauter, Austin writer Chris Oglesby and Megan Crigger,
Director of Austin Art in Public Places. I had a second row seat, in
between writer Gene Fowler and Pearly Oglesby, co-host of the house concerts
that the Oglesby home is known for.

If I may be permitted to just drift in the stream of ideas:

(And yes it was noted that you can’t step there twice, but I’ve done it
anyway.)

Travel is often equated with escape unless one packs a field of care.
Certainly a verdant notion, one requiring conscious intention, as
opposed to inadvertent (un-verdant) projection.

The binary Y in the road serves ego, as has been pointed out succinctly
by Yogi Berra. Meggan Crigger agrees that ego can be the force that
sometimes unbalances the mutual spaces inherent to the processes of art
in public places.

To be somewhere is to be. Sounds like this should be obvious, but have
you tried it lately? (Hint: see “unsustainable” above.)

"The feeling I had many, many of those nights in Lubbock was not as
constructive as the daylight "Lubbocky" feeling. It was the
impossibility of remaining inside those four walls, a compelling need to
see what was going on beyond, a hunger to know who else roamed out
there in the night and to discover what was going on in their heads; a
need to connect, communicate and experience; a lack, a need caused by
the dry void of the night air…a need for something, anything. The
external force is similar, I assume, to what would happen physically if
an astronaut were to step naked out of the space station; the
astronaut’s organs and body cavities would explode because the vacuum he
has stepped into needs to be filled. The astronaut would be pulled
apart from the outside in. This pulling feeling, sucking out the energy
of one’s soul through the eyes and ears and feet and groin, this
compelling force – from where? — is what I am feeling those long windy
nights in Lubbock. Nature abhors a vacuum, and Lubbock wants what is
inside of me."

Can’t blame her for reading all that. Good stuff.

“Lubbock is like living on a map.”  (No, it was the other Chris who said
this.)

Karen puts forth the proposition that place is performed. She says this
with gesture and conviction, maybe even a Tap Step. I agree
enthusiastically, and consider the converse notion, which I harbor in
that place that wants to think that authenticity is possible: nowhere is
pre-formed.

Then there is this “burden of awareness” that keeps coming up. At first I
thought this was one of the more ungrateful strings of words I’d ever
heard. More like a gift I said to myself. But then I remembered it’s
actually not a given. You have to apply it. It’s really said in the
spirit of reciprocity. It’s a kind of personal responsibility to keep
your humanoid mobile unit on its toes, so as to not fuck up displace.

The night was easy going. The four up front brought humor, animation and
insight. Several in the audience brought some good counterpoint.

Authenticity is a source of discomfort for many. Oilcan must be applied
in order to dispel the illusion that the human engine is a closed
system. Reciprocity is required in any transaction. Nostalgia is
universally held, but is less related to the notion of place than is
generally believed.

I speak briefly with a man recently transplanted to Austin from France (I initially thought he was from Havre). He tells me that he likes his new home, and informs me that it’s the only Texas city in which his expected stereotypes don’t hold true.

Afterwards, a few of us ended up at the Texas Chili Parlor for a couple of bowls and beers. It was pretty uneventful, but for the fact that in this place, it’s one of the few places left. 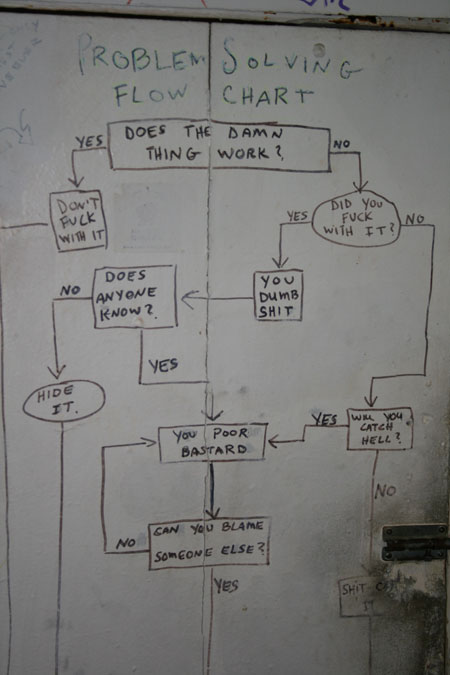 Lubbock native Hills Snyder is an artist from San Antonio. He recently wrote twin reviews of Psychedelic for Art Lies and …might be good. His most recent work, Cat Tois, was given the Love Is A Drug (or something like that) Award at the San Antonio Cammy Awards this past March. He will create a new work in an open studio environment at Blue Star Contemporary Art Center throughout the month of September, opening Thursday September 30.

The Yes Men are the frigging best. I love them.