On, Of or About

The idea of grouping works on paper — drawings, watercolors, prints, photographs, etc — in a single category is a very practical one. Museums are tasked with preserving and storing different kinds of art, and anything on paper requires certain conditions regardless of what the paper was used for. There has also been a sense, historically, that works on paper are inherently of lesser value than other kinds of art. If it was meant to last, the artist should have carved the piece in stone, or painted it with good oils on a canvas. Traditionally these are sketches, studies, preparations for the real work of art (except in a few situations, such as illuminated manuscripts).

In recent decades this paradigm has been turned on its head, as permanence and rigidity started to be seen as liabilities rather than virtues in certain critically celebrated approaches to art making. Paper is a media that is used widely to disseminate information and to shape public opinion, and as such it has become an attractive material to use for critiquing society’s foibles. Paper also has a feeling of intimacy and humility, and thus can convey honesty. The sketches and notes we make in notebooks or on slips of paper, the snapshots we take and stuff into albums, make up the small gestures that become the detritus of daily life. 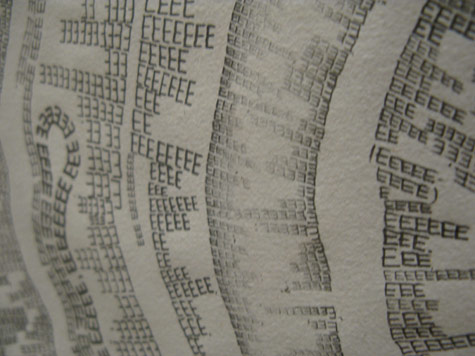 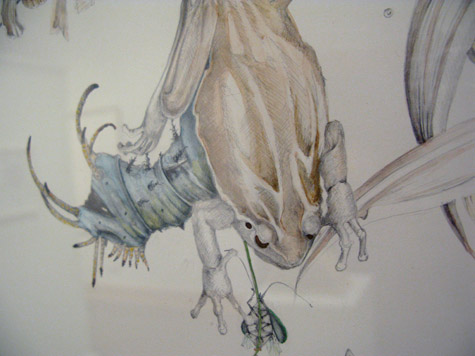 
Curator Mary Mikel Stump* makes a virtue of the uncertain status of works on paper with a show called "On, Of or About: 50 Paper Works" at Texas State University Gallery. The exhibit, much of which comes from the private collection of Timothy Woolsey (credited as co-curator), explores the avenues that artists have been driven down by adopting paper as a substrate or even a primary material. This is a dense show which moves in a number of directions simultaneously. Text-based compositions mingle with textural and minimalist drawings, paper-based sculptures, and representational pieces. Although it could be considered a kind of survey of contemporary paper-based art, "On, Of or About" makes no claims to comprehensiveness, and eschews photography in particular. 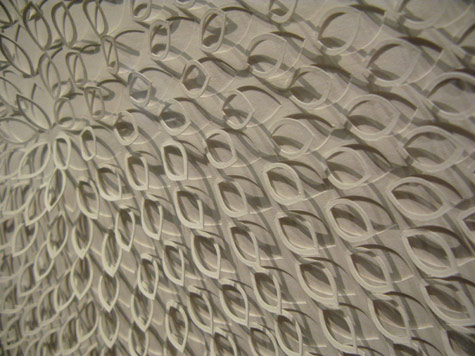 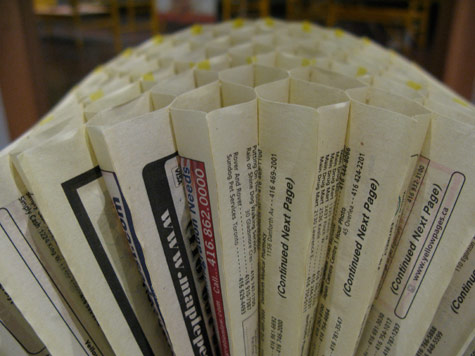 Many of the works on view take advantage of the properties of paper to blur the boundaries between sculpture and drawing, and at the same time between surface and image. A number of the pieces employ cut paper and feel like three dimensional drawings. In others, the natural warping of the paper gives an almost sculptural feel to the surface. The use of cut books is also a repeated theme, blending print-, text-, and sculpture-oriented approaches into singular objects. 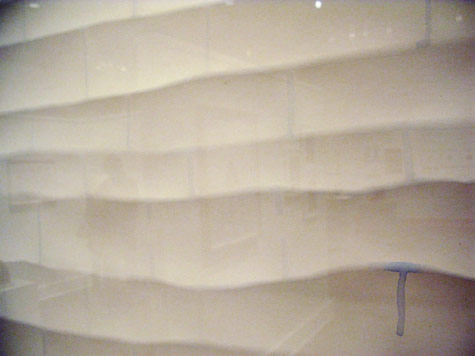 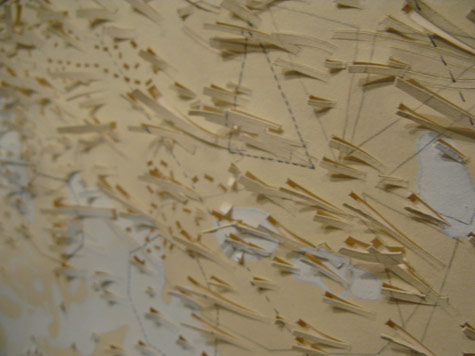 "On, Of or About" is packed with interesting approaches to composition, and a wide range of conceptual frameworks underlies it all. The playful fantasies of Jayne Lawrence rub up against the diagrammatic text in Christopher McNulty’s "Everything," both hanging across from an altered telephone book by Kristiina Lahde. Nearby hangs Laurie Reid’s "Speechless," an organic manipulation of paper with watercolor  The seemingly occult geometries of Louise Despont, drawn on an antique ledger book, give way to a series of five minimal, gradually lightening circles by Gloria Ortiz Hernandez.

It’s an exhibit that’s impossible to sum up, but shouldn’t be missed. "On, Of or About: 50 Paper Works" runs through October 22 at Gallery I, School of Art & Design, Texas State University – San Marcos. 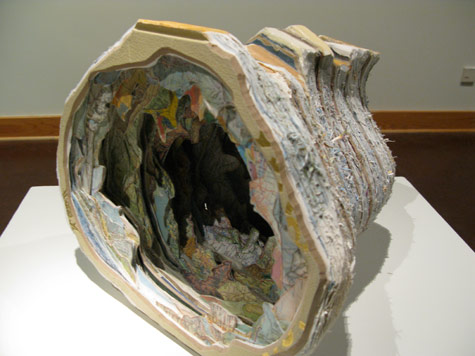 *Correction: originally credited Becky Kerlin as curator. She gave a lecture for the exhibit, but was not involved in curating.

Thanks so much for coming to the On, Of, or About Paper show at TSU, and thanks for writing about it! It was fun to help put it together.
Tim Woolsey