The Land Heritage Institute is a fascinating organization, if difficult to pin down. Beginning in 1979, the City of San Antonio began to explore the idea of building a reservoir along the Medina River south of the city to provide for future water needs. As part of the process, the city brought in archeologists to excavate sites on the property alongside ongoing dam construction. Around 80 sites were eventually identified, but when the citizens of San Antonio voted down the reservoir project in 1991, archeological research halted along with the resevoir construction. Through a rather circuitous process, the 1,200 acre site was handed over to the Land Heritage Institute, which is an independent non-profit with ties to a strange assortment of groups: the Tap Pilam Coahuiltecan Nation, San Antonio’s Department of Parks and Recreation, the American Institute of Architects, the Texas Equestrian Trail Association, San Antonio Water System, etc.

In an apparent bid to add to this menagerie of stakeholders, LHI is now reaching out to the art community. Yesterday the organization hosted a site-specific photo installation by local photographer Ansen Seale. A group of light boxes, collectively called "The Corn Crib," was installed in a small stone building once used to store corn for drying (in the days when the property was used as farm land). This show acts as a prelude to next month’s "art-sci symposium," The Nature of Place — with participants including Sandy Stone, Lucy Lippard, Joan Jonas, and Anjali Gupta, to name a few. The LA-based Center for Land Use Interpretation is also involved. 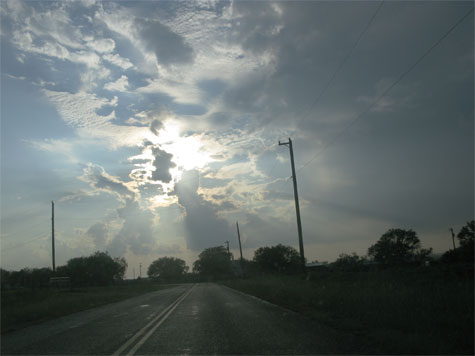 The first part of the installation is the journey to reach it. A long drive south on Highway 281, then down some winding roads through the rural areas on the south side. That this is still within Loop 1604 brings home how lopsided San Antonio’s development has been — travel the same distance north from downtown, and you’ll be mired in strip malls, if not stand-still traffic. Out here it’s ranches and miles of empty, two-lane farm roads. Eventually, there’s a small sign indicating the turn for a long, windy one-lane road to LHI’s headquarters. Reach the end of this road, and you’re still a hay ride away from the one-room stone gallery. 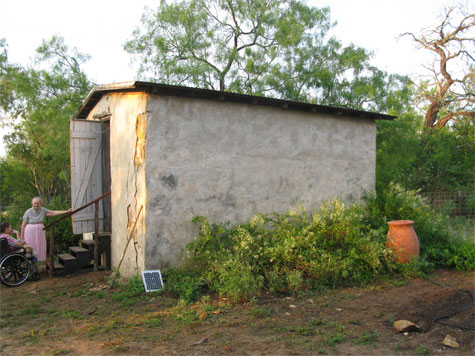 Inside the darkened gallery, Seale’s installation is composed entirely of photographs of corn displayed as light boxes. The photos fall into two groups, which alternate in the installation. The first group is straight-forward photos of corn (fresh and dried) on a black background. For the second, Seale rotated the corn as he shot it with what he calls a "reverse-panoramic" process, effectively flattening the entire ear like a world map into a rectangle of kernals. The product is entrancing images of some of the most visually stimulating corn cobs I’ve ever seen. Or maybe I just never bothered to really look before. At any rate, I had to ask the artist just to be sure there was no digital manipulation of the images (there wasn’t). A friend of mine who’s a fan of Ansen Seale’s work once told me he considers Seale more of a scientist than an artist. At times his work goes too far in this direction, feeling like a slightly cheesy science museum display without an explanation, but much of the time it is effective. Buried in a stone hut in the semi-wilderness, it works. And as an overture to the art community it strikes all the right notes: the installation embeds the simple act of seeing in the cultural and ecological history of a contested space through a technically rigorous process, without a hint of pretension.