by CCGrady August 17, 2009
FacebookTwitterEmail
The subjective mind is a slippery, squirrelly critter, y’know?

Let me put it this-a-way: when broken down the barest of essence, everythang can be explained in terms of mathematics.  However, when it comes to matters of opinion and taste, 1+1 = 2 – the beautiful clarity of the simplest addition problem – gets lost somewhere in the deep crevasses of the brain, where experience distorts perception and provides curveballs of Koufax caliber, and the equation no longer computes and the math gets fuzzy (no, let’s not revisit the meaning that W laid on us so many fumbled press conferences ago, I’m using fuzzy as a synonym for confounding, simple as that…).

Let me put it in simpler terms, I hope.  Say you had a high school buddy in the ‘80s that played a lot of Dungeons & Dragons, always gravitated to the violence of science fiction and fantasy novels, joined the JV fencing team, liked to draw pentagrams on his notebooks in red ball-point pen, occasionally thumbed through LaVey’s “Satanic Bible” as well a lot of war history texts, and loved the melodrama rife in theater and opera performance.  Then one day, you’ve got “Run To The Hills” at deafening volume, just rattling the stereo speakers inside your pathetic 1980 Celica Supra hatchback whose tires are a Savalas-level of bald, tweaker-style jittering down MoPac, with the devil horns out the window and singing along (ahem, poorly) with Bruce Dickinson, you notice your homeboy is listless in the passenger seat.  You turn down the volume.

Boiled down further…he should like Iron Maiden.   Hell, he should at least own the Di’Anno fronted/Harris penned sophomore brilliance of 1982’s “Killers” through to 1985’s “Live After Death”, chronicling various performances on the “Powerslave” tour, and all points in between those ass-kickers.  But he really doesn’t care for Maiden, and it doesn’t make sense to anyone that knows him and likes Maiden, especially me.

Which brings me to the mystery of my own subjective mind, and the collaborative exhibit between Jana Swec and Jared Theis at D Berman Gallery, hangin’ ‘round ‘til early September.  In the time leading up to the visit, I done did my online homework and was pleased on many levels by various components.  First of all, I dig any artist that chooses to present his or her work with others.  It suggests both humility and courage…a flexible ego capable of sharing space, and a willingness to be interpreted/critiqued twice (with his or her sharer of gallery space, and independently of him/her).  Further, recognition in the form of accolades, positive press clippings and countless shows in Texas and elsewhere suggest rock solid work ethic and a determination to create an adventurous vision worthy of being seen (ahem, more courage).  Take it a few steps more, why don’t you? – both artists have a clear sense of purpose, indicated by strong statements that address the violent interaction between the natural world and our increasingly industrialized modern culture, and how systems of various kinds may evolve and perhaps ultimately resist a culture drunk on its own mechanized invention.  Combine these notches in the figurative belt with undeniable leadership skills and elbow grease (Swec was a co-director of the very popular East Austin Studio Tour and a member of the small but highly visible Sodalitas ) with some musical talent (she’s also the vocalist for the hilariously entertaining Supersonic Uke ) and pedigree (Theis’ resume holds a current assistantship with Pampa-born and internationally acclaimed workhorse Catherine Lee ), I should be fiending, hooked on every move. 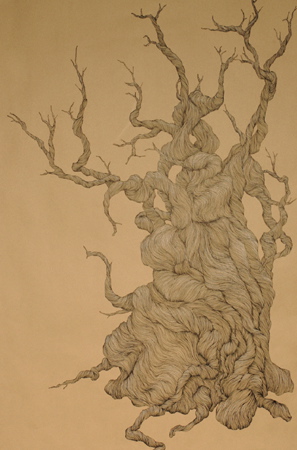 
And while I certainly appreciate the fantastic articulation of Swec’s pen and colored pencils, these knotted vessels resembling frustrated, elephantine tree trunks left me chilly (which, given the artist’s statement, could very well have been the intended emotional reaction).   I, did, however, take one exception in the form of a piece entitled “Red”, where the addition of fiery color to the equation created a symbolic tension of which I could totally get down, a kind of angry hypnotism.  These figures are expertly drawn, and some of them – “Blue” and “Stump” in particular – incorporate elements of shadow and light that lean into a theme of beauty fighting against a dreadful modern current.  But for the most part, their repetitive nature left me with little emotional resonance beyond a big thumbs-up for masterful technique. 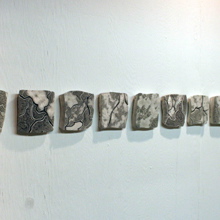 
In the case of Theis, again – this artist strikes me as having exceptionally creative ceramic ability and has been steadily producing work for the last several years – I’m left unaffected by his abstract sculptures motivated by themes similar to the content of Swec’s statement.  Whether resembling an aerial view set of some post-modern apocalypse (“April’s Joke” or “Unaccompanied”) to squares of ceramics that look as if they’re attempting to mimic cellular activity under a microscope (“Measures”), I found that none of it moved me as much as the context given before seeing the work in the form of his resume and statement.

So, to close – I like anthemic arena rock and its silly, blustery gestures, black leather, the discussion of various religious themes in art, B.B. King’s guitar playing and singing, the director Phil Joanou’s often gritty realism, Ireland, and self-righteous lead singers.  But I think that U2 is goofy nonsense.  Does that give any closure to this whole deal?


(As an aside of a closing thought relative to this exhibit, up for discussion/debate – what makes a work of art worth thousands of dollars if the artists are relatively unknown?  And who is ultimately determining the artist’s worth – the artist him/herself, or the gallery owners that know their consumer/patron base, or both?   And if you’re creating art that, at its core, is addressing the ego of humanity clashing with the natural world and how it may ultimately lead to the very demise of our absurd species, it strikes me that such a message should be heard from the friggin’ rooftops not only all over Austintown, but everywhere.  Does it trouble anyone that putting it in a gallery that prices pieces to the stratosphere somehow defeats the purpose of much more universal communication about very dire subject matter?  Just throwin’ seeds…)

This is one of the worst art reviews I have ever read. The show at d berman gallery, Jana Swec and Jared Theis, is a beautifully exhibited in the galleries simple and elegant space. The first two paragraphs in the review are so awful and have no relationship to the work. This ”journalist” should be taken off your roster, Glasstire, I thought I knew you better.

A word here: CLARITY. Try it. And try this: write about the work, not about yourself. Please stop showing off. It’s really tiresome.