With the extension of the Riverwalk, San Antonio got some new high-visibility public artworks by people like Bill Fontana, Donald Lipski, and Stuart Allen. The city has also invested in public art from the airport to the Lavaca neighborhood in recent years. But I’ve always been interested in those rogue attempts to place a visual stamp on the city: the street artists that work with the mindset of a public artist.

The typical street artist tends to repetitively brand the sides of buildings, billboards, trains, and other large, flat surfaces with what amounts to a huge signature (even if the artist isn’t using a "nom de rue" she often repeats the same image over and over, so that it becomes like a signature). These artists also tend to work in situ, creating their pieces relatively quickly and then moving on. The typical public artist works on large, one-off pieces with city-owned space or infrastructure, adding interest to what might otherwise be a dull, lifeless area. Donald Lipski and Bill FitzGibbons worked with TXDOT to install under highways. Anne Wallace stamped fresh sidewalks with oral history as the city poured them. These artists usually work on elaborate designs that have complicated fabrication and installation processes. These pieces are largely anonymous, apart from whatever press they get when they are unveiled. The vast majority of the viewers will never know who made them, and there’s no sense of identity like that which is formed by repetitive tagging.

This brings me to a series by Aaron Forland, who works between these two artistic spaces of "street" and "public." He has installed a small group of pieces along Durango street between Main and Alamo, using the little doors on the bottom of the traffic light poles: 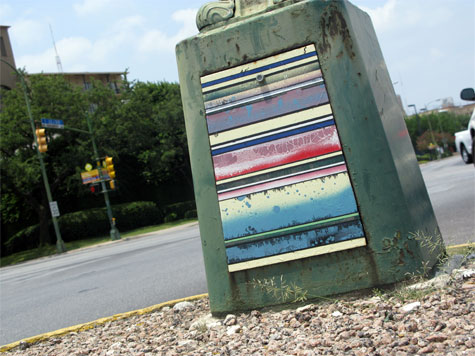 Like a street artist, he uses spray paint on an existing surface, and doesn’t ask permission. But more like a public artist, he takes his time and carefully works over composition and placement (Forland removes these electrical covers, takes them home, methodically paints them, and then replaces them). Some of these pieces are months in the making. He also takes a painterly approach, and the series is much more reminiscent of a series of paintings than a group of tags: 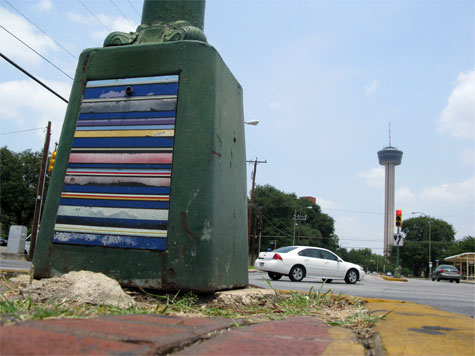 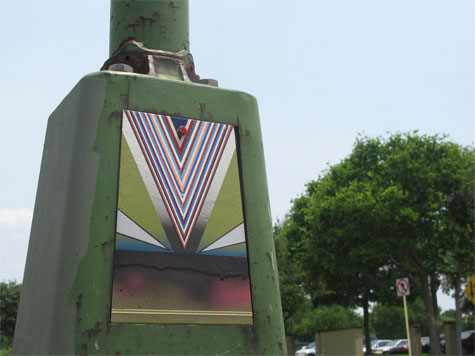 Another key to these pieces is that they are framed within the industrial design of existing city infrastructure. By using these removable plates, Forland creates pieces that feel as if they are part of the infrastructure. By contrast, most street artists work in a way that shows little sensitivity to the texture, dimensions, or placement of the underlying surface. Forland’s little murals enrich the public space in a way that is more subtle than most public or street art (being below the line of sight, it’s easy to drive past these pieces for months or years without noticing them), but engage the methods and ideologies of both.

BONUS: I went by Aaron’s apartment to shoot sneak peaks of his two newest, as-yet-uninstalled pieces. Keep an eye out for these as you travel on Durango near King William: 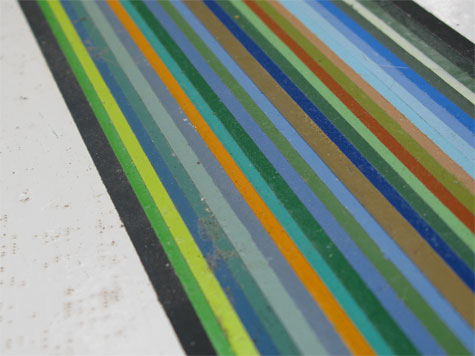 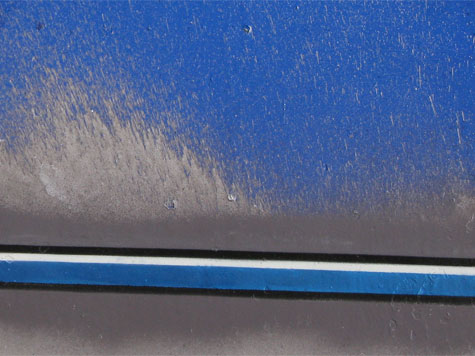