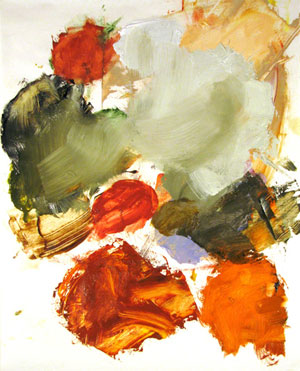 Terrell James is a highly productive local painter who has been traversing the contemporary art scene here in Houston and abroad for many years. I was able to do an interview with her via email while she was in Miami for the fairs this December. Her new exhibition Preoccupations features a group of works from her ongoing series Field Studies. The “field” James refers to is the studio. She is “studying” the process of painting, as well as the landscape that emanates in the textures of her thoughts and movements.

Sasha Dela:  In your current show Preoccupations at Devin Borden Hiram Butler Gallery, your series of Field Studies dominated the exhibition. In some ways this show commemorates a decade of the Field Studies, is this correct?

Terrell James: Yes. Devin, Hiram and I thought it would be timely to revisit the Field Studies and show them along with only two paintings. The first showing of them was in 1997, on a table, in a vitrine, unframed and probably still slightly wet!

SD: Tell me about the name “Field Studies.”

TJ: I came up with the name as a description of my own process, since these began as notations taken from my painting palettes. They result from explorations of colors and their relationships. Also, I was referring to artists working before plein air, Impressionists, like the Barbizon School painters, who took color notes outdoors. Their loose sketches provided fresh information as they returned to the studio. Those patches of color were directly from “the field.”

SD: How have your Field Studies developed over this period of time? Have they influenced your larger works on canvas? 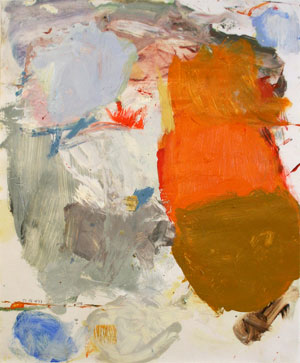 TJ: In 1997, I did the first group of 12 or so Field Studies. They showed more of the ground, rarely involved any medium other than solvent and seemed bare; less lush, less buttery.

They were made as a response to my paintings in general, which were dark, dense, hard to see. Amber like. So the new series came as a sort of antidote to the dark, layered paintings I was struggling with at the time, because of their immediacy.

If you look at the whole body of work, you can see the drawing series continues to track the changing palettes of the works on canvas. Also, about four years ago I went to a larger size (from 16” x 12” to 20” x 16”; same ratio, but brush strokes changed scale along with gesture). Collage, drawing and a more deliberate assertion of form have come into play over the years.

SD: Would you say that a certain amount of pragmatism influences your work in the studio?

TJ: Hmm, pragmatism. Well, the color studies on paper, which I consider drawings, help propel the new color combinations in the paintings. And then there is the reverse translation. The large canvas works stay more open; freer, because of the practice of the drawing in paint. Since the works go back and forth, and I work on them together at the same time, the paintings and drawings are in direct conversation. Even further, one patch of paint on a field study can leap over to a canvas, from a palette knife scrape or juicy brush scoop.

SD: You do occasionally abide by some of the formal compositional rules in the Field Studies and in the paintings, however sometimes these are left behind. You have talked about the desire to create “floating spaces”. There is also a constant back and forth in your work between the sense of object-ness and materiality of the paint and the spaces which reference landscape in very loose terms. What can you say about all of this? 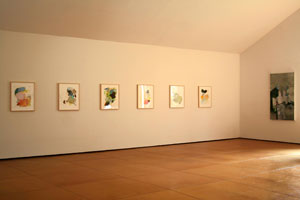 TJ: Because I work on the Field Studies on a table, flat, there is a different orientation from my paintings, which are worked on vertically, on a wall or easel. In working on the paintings, I constantly move, back up, step forward, change the canvases in an entirely different point of view.

The Field Studies‘ flow is sometimes created with added liquids, which in itself contributes to the “floating” quality of the drawings, but it is more than material shift. I see a disorienting lack of the expected perspective; what we see when we navigate through three-dimensional space in the world. A couple of artists visiting the studio over the years have mentioned a non-Western quality to Field Studies. That makes sense to me as something planar I explore. Since first seeing them in my twenties, I have loved the topsy turvy space in early Japanese woodcuts; the sense of seeing from above and at eye level, alternating visual planes. Cezanne’s tilting tabletops.

Also, as I have worked on these drawings through the years, they have become more atmospheric. But all along I have looked at clouds as a reference point. Baroque swirls in Roman domes, Puti peeking down at us.

SD: Your Field Studies speak to my need for the unexpected; they also make me think of ideas of harmony and balance. How does your process allow the work to arrive at these unexpected moments?

TJ: The process of applying the paint, the washes, the lines, certainly does keep the image beyond anything I may have preconceived. These works are alive because they are so direct, so fast. In some ways, they feel automatic or undirected, like visual dreams just before sleep.

SD: Tell me about your research as an artist; what are you learning and what thrills you?

You know, I started painting with oils as a ten-year-old. Color, the movement of paint, the continuing stumbling discoveries in the materials—those are better than raindrops on roses, whiskers on kittens. Research—the visual world in general and seeing visual arts themselves. I am overloaded now at the seven (or is it nine?) fairs here in Miami. I will write notes, look up artists whose works I especially liked, and just try to take in all that I have seen in three days. Just as likely to come through in my work:  the first midnight walk along the boardwalk, weird lighting on beach dance productions and the sounds; the tone of other figures walking, listening, alone.

Sasha Dela is an artist and writer living in Houston.