An experiment with “New American Talent”

The juried "New American Talent: The Twenty-Third Exhibition" (or "NAT23") at Arthouse in Austin is something like a science fair for artists. Arthouse has conducted this competition/experiment 22 times before. Using the same formula, and changing one simple ingredient (the curator) with each attempt, the results often prove to be staggeringly different. But Arthouse’s NAT survey is known for its new discoveries. 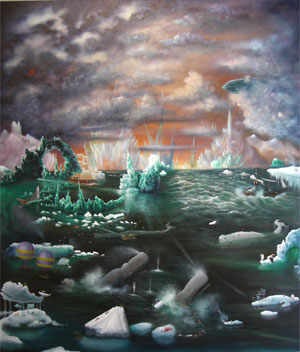 It starts with over 1,000 submissions, each meeting a minimum set of requirements. The artists are at varying stages in their careers; some might already have work hanging in museum collections while others have no gallery representation or are still trying to finish art school. A guest curator gets a limited amount of time to review the artwork and choose the works to be displayed in an approximately 5,500-square foot space.

This year’s curator was Nato Thompson, an activist, curator and producer at Creative Time in New York. Prior to joining Creative Time, Thompson was a curator at Massachusetts Museum of Contemporary Art (MASS MoCA), and was involved with the Department of Space and Land Reclamation (DSLR), the 2003 mass performance/activist campaign in Chicago.1 Thompson’s activities reflect the current surge of activism in the art world, though he himself might chafe at such easy pigeonholing.2 Regardless, he is keen on all forms of information sharing and production, and his activist take on American culture is evident in "NAT23": in the show’s catalog essay, he states that he looked specifically for art that inspires “thinking on the social and political conditions facing us today.” The works he selected comment on the human condition, using imagery both from contemporary American society as well as diverse cultures. 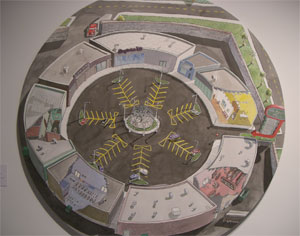 Works in the exhibition address notions of race and identity, the tortured environment, technology overload and forgotten or neglected landmarks and people. Fear, brutality and loathing are also in evidence. Fortunately, little of what Thompson has compiled for Arthouse is transparent or overtly didactic, so any thread that links the art is just that — a thread. Maybe because the artists selected for this experiment are also in a state of investigating, the products of their labor and imagination are more stimulus than critique.

Interestingly, some of the most controversial issues manifest themselves in traditional media like oil painting, photography and printmaking. “R” rated lithographs created by Goran Maric depict contemporary scenes of torture and brutality similar to Goya’s Disasters of War. Teruko Nimura’s soft sculpture entitled Black Doll (2007) reeks of masochism, manipulation and mutilation. An epic painting War of the Whales (2008), by Justin Storms, evokes the destruction that looms in works by Bosch and Géricault. Meanwhile the voyeuristic photography of Margo Geddes’ Lightpole 1 (2007) and Beau Comeaux’s A Frame (2007) seems to emanate an invisible, lurking energy from the dark side.

Consumerism, suspicion and fantasy mix well in the idealistic rendering of Corey Escoto’s Self Improvement Plaza (2007). This watercolor, painted from an aerial viewpoint, depicts a familiar yet unrealistic retail-like setting where those seeking improvement might find exactly what they are shopping for. Shouldn’t we be worried about the empty parking lot? 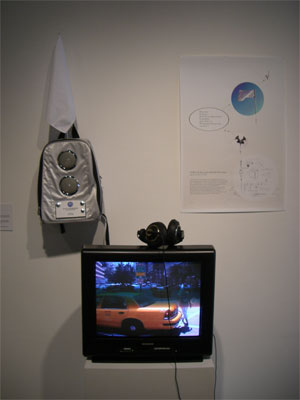 Emily Puthoff’s S.I.R.E.N. Surrender Module Personal Portable Edition and Margot Herster’s Soup and Yogurt come across as discoveries in the use of non-traditional art materials. Through research, prototyping and field-testing, Putoff’s fictitious findings explain the power behind Whitney Houston‘s recording of "I Will Always Love You" and the song’s ability to lure known terrorists into surrendering. Herster’s findings, on the other hand, are based on facts of a different, non-fictitious nature. The subjects in her multi-media installation are 12 Kuwaiti detainees (held in Guantanamo), their families and the American lawyers representing their civil liberties case. Herster’s documentary brings to life the faces and personalities of those directly affected by American policies and legal system (including families of the imprisoned and interrogated).

Though stitched with the same sociopolitical thread used by Puthoff and Herster, playful and inventive are words I would use to describe works by Joe Craig, William Lamson, Seth Lower and Megan Michalak. Lamson uses black balloons to produce a series of videos titled Actions (2007-2008). In what could be a stark white laboratory, the artist films different configurations of helium filled balloons in and around his nondescript self-made contraptions. A selection of six actions (in a series of 30+) sequence in a video loop on a large monitor. With each action, we witness balloons floating, falling or sitting stationary in differing scenarios. The artist uses a variety of weapons and methods to relinquish the balloons. In some cases, the artist films himself in practiced movements of self-defense, whereby he extinguishes the balloons. Watching Lamson’s staged experiments is like eavesdropping on an actor rehearsing for a James Bond film. 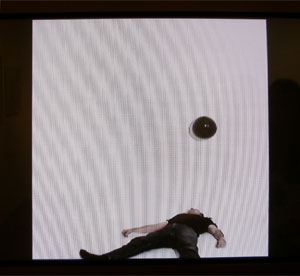 “NAT23” presents over 75 objects by 43 different artists. Most of these artists and their work can be found online (if not on their own website, then on Youtube, Facebook, or some other social networking site). But there’s always something to be said for seeing the work in person, and the variety of materials and media in “NAT23” are as diverse as the ideas and images.

1 Department of Space and Land Reclamation (DSLR) was “an ambitious three-day campaign which sought to reclaim all the space, land, and visual culture of Chicago back to its public citizens. DSLR brought hundreds of artists, activists, and community groups together for a weekend of interventions, presentations, graffiti, trespassing, pirate radio, community meals, loitering, hacking, guerrilla gardening, public performances, parties, and discussions.” Source: Counter Productive Industries

2 “Fuck these easy, dorky categories. Is it art? Is it activism? Those questions are dangerous and misleading. How about questions like: Who is this for? What does it do? In what manner does it operate in a social structure?” – Nato Thompson interview by JohnJ McGurk in Psy-Geo Provflux, Issue 1, Volume 1, 2004.

Angella Emmett is an Austin-based artist and writer.

but do you think the show ‘worked’?

“war of the whales” felt really out of place to me but i enjoyed beau comeaux’s pieces hanging next to it. the quality and scale of his photos were unnerving.

all in all i didn’t really think it was a strong showing and in general it all felt fairly disconnected. i agree with your point about the “thread” or lack thereof. having read nothing about nat23 beforehand i didn’t really pick up on any sort of common theme at all and honestly a lot of the work felt really expected, so intensely personal that it was difficult to connect with much of anything at all. something about the john lennon telephone piece made me come closer and i really enjoyed the drawings but for the most part i felt myself skimming through the majority of the work. i’m not much of a video guy but i enjoyed lamson’s balloon piece. another one of the installations wasn’t actually working when i visited. i believe the computer crashed. a mac, ironically.

i agree with ivan lozano that as a show it was pretty drab and felt slapped together. i didn’t get a sense of the thought behind it at all and any high points were bogged down by the execution. would be curious about how everyone else felt about it. personally i think art house could and should do better.