“Making It New: The Art and Style of Sara and Gerald Murphy” at the DMA 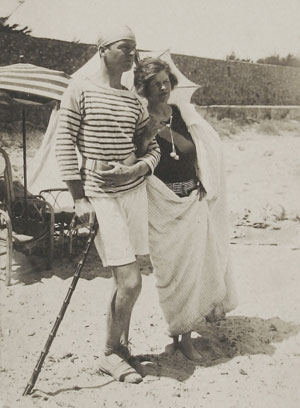 It is tempting to view the two lives celebrated in Making It New: The Art and Style of Sara and Gerald Murphy, organized by the Williams College Museum of Art and on view at the Dallas Museum of Art, as constituting the longest collaborative work of performance art ever. From the day of their marriage in 1916, Sara and Gerald Murphy did everything with a style and grace that cared not a whit for convention or fashion. In the 1920s, in Paris and at their Riviera residence, Villa America, they entertained simply, but with such flair and imagination that their friends must have felt like they were the cast of some grand theatrical entertainment. And what a cast they were: Pablo Picasso, Cole Porter, Ernest Hemingway, F. Scott and Zelda Fitzgerald, Ferdinand Leger, John Dos Passos, Archibald MacLiesh, Dorothy Parker — the list goes on, but you get the idea. However, their friendships with and patronage of these artists and writers would have perhaps netted them a mere footnote in the artistic and literary history of the 1920s had Gerald Murphy not picked up a brush and created some of the most original paintings of that illustrious decade.

Those paintings — or at least the seven that have survived — open Making It New, together with black-and-white photos of four of the paintings that have been lost.  (It’s never been determined just how many paintings Murphy made — his memory on the subject was notoriously elusive — but it seems to have been about fourteen.) Two smaller still lifes, one gouache and the other crayon, both on paper and attributed to Murphy, round out the first room. Even today, 80 years later, they bear little resemblance to what any painter was doing at the time, nor do they look like anything anyone has done in the interim. Though they borrow from Cubism and Constructivism, they also suggest the precisionist style of two of his American compatriots, Charles Demuth and Charles Sheeler. 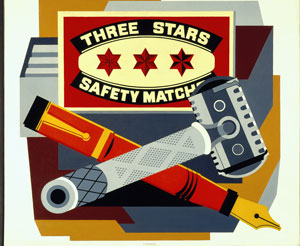 Gerald Murphy came to painting obliquely; nothing in his background or his life to this point (he was about 33) would have indicated such a direction. The story goes like this: Strolling down the Champs-Élysées one fine day in October 1921, he turned the corner onto the rue la Boétie, where the fashionable galleries were located, and felt “a shock of recognition.” He had discovered Cubism. Later, he could not remember titles or artist’s names, but he told Sara, “If that’s painting, that’s the kind of painting I would like to do.” After brief training with the Russian émigré modernist Natalia Goncharova and some practical experience refurbishing the painted backdrops used by the Ballet de Russe de Monte Carlo, he established a studio and set to work. He had some success, exhibiting annually in the Salon des Indépendents from 1923 to 1926, and received favorable critical attention (his monumental Boatdeck, 18 ft. x 12 ft. and regrettably among the lost, was a sensation at the 1924 Salon). But he stopped painting in 1929; a return to the U.S. in the early 1930s and the assumption of other responsibilities ended his painting. Then, in 1960, his work was rescued from obscurity by Douglas MacAgy, director of the nascent Dallas Museum for Contemporary Arts, when MacAgy included five of his paintings in an exhibit titled American Genius in Review No. 1.

Upon learning the news, Gerald’s droll response was, “I’ve been discovered.  What does one wear?”

Perhaps the most familiar of these unfamiliar paintings are the two that the Dallas Museum of Art owns, Razor (1924) and Watch (1925), along with the Museum of Modern Art’s Wasp and Pear (1929).  Razor has a heraldic feel to it, a safety razor and a fountain pen crossed like swords with a box of Three Star Safety Matches above. The razor and pen are rendered tolerably realistically, while the box of matches is sufficiently Cubist that its sides never resolve into anything as prosaic as a rectangular box meant to contain matches; its face, in true Cubist fashion, rises perpendicular to the planes that suggest the box and presents itself as a sign. (Meanings personal to Gerald may be and have been ascribed to this and other of his paintings. Some such interpretations are persuasive, while others seem unduly speculative and flirt with melodrama. If you’re interested, I refer you to the catalog and to Amanda Vaill’s fine 1998 biography of the Murphys.)  Watch is Gerald’s largest extant painting, about 6.5 ft. square, depicting the inner workings of a pocket watch. 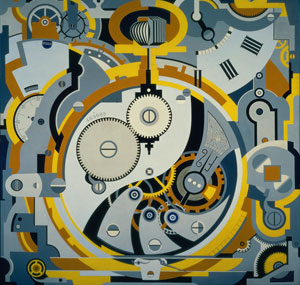 “I seemed to see in miniature detail, but in giant scale,” he said years later in discussing his paintings, and this would seem to be the painting he was talking about. In precise grays and tans and yellows, he delineates the intricate workings of a timepiece seen with its backing open. But in the upper right corner of the painting, there is a glimpse of Roman numerals from the minutes portion of the watch’s face, while in the center left, there’s a segment of the seconds dial; the Cubist fly in the Precisionist ointment is that Gerald painted not what he saw looking at the watch’s workings, but also what he knew was there. Whether for compositional reasons or otherwise (see parenthetical immediately above re: interpretations), Gerald adjusted the watch’s workings so as to create a watch that is inoperative; it looks like a watch, but it’s dysfunctional.

Wasp and Pear has to be one of the strangest paintings ever committed to canvas.  It is a vaguely abstract rendering of a wasp battening, or fattening itself, on a pear, something wasps do with overripe autumnal fruits to prepare for their winter hibernation.  Again, Gerald takes a diminutive subject and blows it up to monstrous proportions; also monstrous is the wasp’s anatomy, with a leg extending from the wrong body segment, an upside down head, and a wing belonging more to the pear than to the wasp. This is not slapdash — Gerald was a meticulous craftsman (he spent four months getting the details of the cigar box in the Whitney’s Cocktail just right). The wasp’s dislocated anatomy is meant to disorient the viewer; you know immediately that something’s not right, but you’re not immediately sure why. Meanwhile, “behind” the pear the wasp is ravishing; we see the interior of a pear, likely the same pear, in that Cubist strategy of painting what is known, not simply what is seen. It also provides a fecund image to balance the wasp’s rapaciousness. 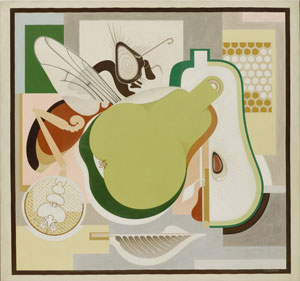 The rest of Making It New covers the Murphy’s life and milieu. There are paintings by Picasso, Braque, Gris, Le Corbusier, Leger and others; portraits of the Murphys and their children by Man Ray and Lee Miller; some drawings and watercolors by Sara, all representational (evidently, her embrace of modernism had limits), letters and other ephemera; and a film of a revival of a ballet for which Gerald provided the painted backdrop and the story (the inconsequential choreography was someone else’s). And the razor, the pen, the matchbox and the watch are here, bearing the faint odor of the reliquary. A two-part documentary offers the testimony of friends and relations to the Murphys talent for making an art of living, for imbuing the smallest gesture with meaning (a friend once compared Gerald making cocktails to a priest saying Mass) and to the fascination and devotion they aroused in nearly everyone who met them. That devotion sustained them through the two great tragedies of their life: the deaths of their two sons, one from tuberculosis (diagnosed in 1929, the year Gerald stopped painting), the other from meningitis (their eldest, a daughter, survived well into adulthood). The Murphys made an art of living, but living is not life, as Gerald himself recognized.  Between the deaths of his sons, he wrote, in a letter to Fitzgerald: “Only the invented part of our life — the unreal part — has had any scheme, any beauty. Life itself has stepped in now and blundered, scarred and destroyed … How ugly and blasting it can be — and how idly ruthless.”  Sara and Gerald Murphy continued to make an art of living but with a more sober demeanor. Gerald died in 1964 of cancer; ten years later, the Museum of Modern Art mounted a retrospective of his paintings. Sara, too frail to attend the opening, died of pneumonia the following year.

Making It New: The Art and Style of Sara and Gerald Murphy
Dallas Museum of Art 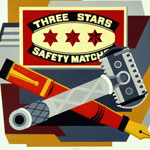