Domestic bliss comes in many
forms. For some, it means the
ordered array of the banal elements that define our immediate surroundings. For
others, it encompasses the timeless household chores that provide reprieve from
the outside chaos. Still others
define it as an emotional sanctuary.
For everyone, however, it resonates in the collective unconscious with
promises of safety. 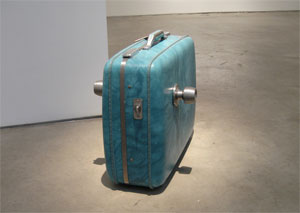 Homage to Domestic Familiarity on view at Anya Tish Gallery presents nine distinct artists’ musings on the subject. The internationally diverse show has some outstanding pieces that resonate with clever insights, as well as some lesser achievements that trample over the same old ground.

The title of the show is
taken from Dustin Van Orne’s sculpture of sheetrock, wood and electric
switches. A row of 10 light
switches is mounted into a box painted in a blue and white color scheme,
perhaps referencing a boy’s bedroom.
The repetition of the light switches suggests mindless acts repeated
daily. Although they are
functional, the switches do not illuminate anything. The piece suffers due to its wall-mounted box presentation
that speaks of Donald Judd’s boxes, but says little more. A much stronger piece by Van Orne is Portable
Sensation of Home, an old-school plastic
suitcase fitted with doorknobs. It
too meditates on repetitive actions, in this case of coming and going, but the
visual impact is less confused.
The suitcase is handily sitting on the floor of the gallery, almost
beckoning the viewer to take flight, while at the same time it recalls the same
doors we walk through when returning home at the end of every sojourn away.


John Knott’s striking construction
is titled Pramulator. It is a retrofitted antique baby
carriage that has been transformed into a space-age hot rod. The carriage itself is shaped like a
bulbous rocket in polished aluminum, the cockpit replete with a tachometer and
speedometer. It speaks of the
typical male desire to soup up any domestic gadget, attempting to escape the
blandness of domesticated maturity. 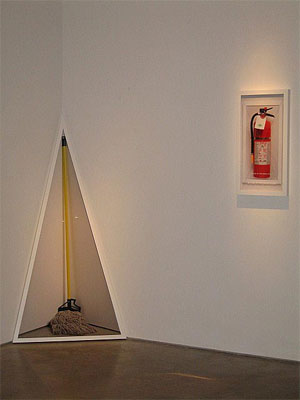 Two photographs by Brandon
Thiessen are perhaps the highlight of the show. In Necessary Precautions #2, Thiessen has set against the corner of the gallery a triangular frame that
contains a photograph of a mop resting in that very corner. The self-referencing in-house photograph
highlights the domestic chore of mopping, while letting the image of the mop and the act rest, as it
were, in the corner.
In Extinguisher II, the
artist has mounted a photograph of a generic fire extinguisher behind
break-in-case-of-emergency glass, creating a dynamic between the depicted and
the material that defines a state of anticipation. These two pieces have a site-specific quality that extends
past the mere notion of domesticity into a meta-narrative of domestic signifiers.


Elzbieta Jablonska, a Polish
artist, works in a similar vein, although her photographs are not as concerned with
formalism as Thiessen’s are. In House
Games, 2002 (Washing, Cooking, Laundry),
she has photographed herself in the kitchen in a Superwoman costume with her
young son perched on her knee. Diagrammatically
superimposed on the work are the Polish words for “washing,” “cooking,” and
“laundry.” The child looks off to
the side of the image, his puckered, forlorn expression giving an emptiness to
this domestic setting that Jablonska appears heroically at peace with, her
posture and face conveying duty, certitude and calm. In her Incidental
Pleasures series, the artist documented the
contents of her kitchen drain for some 300 days. The background of each drain catch has been purposefully
tinted to complement the colors of the various fruit peels and vegetable
rinds. This attempt to abstract
incidental beauty from domestic debris, while not extending as far as her House
Games piece, is visually intriguing. 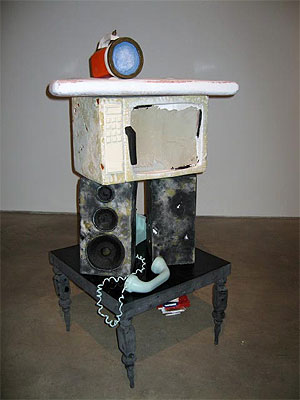 Betty Page meets Norman
Rockwell in the large-scale watercolors by Lauren Bergman. Her images evoke a
Sears catalog aesthetic while exploring the racier elements of domesticity, including
latent passions and overt distortions.
The pieces are well-conceived, but have a tendency to shout when they
could suggest. Wyatt Nash’s All I Need
is an installation/sculpture made out of Styrofoam, paint and plastic. It depicts dorm room essentials such as
a microwave, stereo speakers and a coffee table. The piece has a Claes Oldenburg feel, sort of soft and
unassuming, but Nash does not seem to be in total control of the
materials. He achieves a sort of
slacker aesthetic, but not convincingly on purpose.
The show’s theme is broad
and the attempt to assemble international voices on the subject matter is
ambitious, if not always consistent.
The best pieces of the show are the ones that allow the concept of
domestic familiarity to serve as a starting point for a more interesting dialogue
on what it means to be domesticated.

Garland Fielder is an artist and writer
living in Houston. 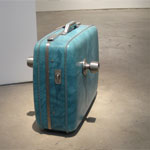