For many Americans living north of the Rio Grande, visions of their
neighbors to the south have a way of sustaining a worldview that
defines the other as wild, oppressive, threatening, willfully lacking
in order or simply transient.

6–Pack, a group show on display at the Houston Center for Photography, gives viewers a more encompassing and personal vision
of Mexico. The depth of these depictions of the strangely banal and often
grotesquely unique, captured by six emerging Mexican photographers,
reinforces some commonly held notions of Mexico, but also offers
moments of strange lucidity. 6–Pack
not only works as a candid self-examination of a complex contemporary
culture that is often dismissed, but also affords a deeper
understanding of a richly sustaining and dynamic social climate. 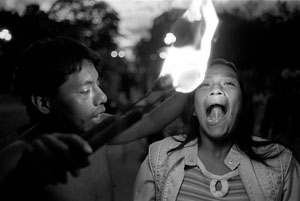 Mexico is described in the exhibition statement as “a country beset by endless social unrest, failing political confidences, hegemony, and urban expansion.” This is evident in the best works of the show. The most successful photographers have unearthed an intrinsic restlessness often found on the fringes of society, yet somehow embracing of the larger context from which it derives. Victor Mendiola’s work, for instance, brilliantly captures characters within a surreal atmosphere of pandemonium. His street-based photographs also draw the audience into a dreamlike personal space that makes you want to jump into. The black and white images from the series De Paso [In Passing] reference the paintings of Francisco de Goya, such as Saturn Devouring One of His Children, in their dreamy candor and nightmarish visions of junkies, drag queens and other marginal figures. Yet these characters seduce the viewer in a way that summons empathy rather than disgust. Intrigue trumps judgment. 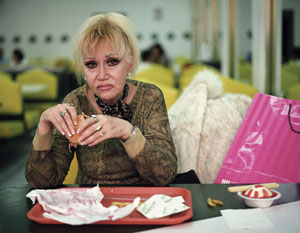 Benjamin Alcantara similarly makes a strong case for the humanity of characters too easily pigeonholed. In his series Artifico [Artifice], Alcantara has positioned models in quasi-natural settings from which they address the viewer directly. They stare at us as if to convey some connection that, should we confront them in real time, would be terribly unnerving. However, viewed from behind the lens, they become records of oblique moments or tropes of social disarray. In one of the large-scale color prints, an older business type stands front and center, flanked by a younger trophy wife/daughter. In the middle ground, a servant approaches with cocktails, putting into obvious terms a social stratification at once flaunted and bemoaned. Another coupling of images positions the photograph of an older woman, made up à la the late Anna Nicole Smith on a really, really bad day, consuming fast food, next to a photograph of a pubescent young woman lying atop a disheveled bed with a saccharine jelly sandwich in hand. The contrast could not be greater, and yet our sympathies fluctuate between each. The strength of the compositions in their candor makes the title of the series richer. Is Alcantara guiding our sympathies from one subject to the other, or are we meant to reflect on our own proclivity toward stereotyping (and thus turning types into artifice)? 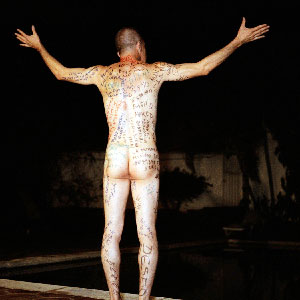 The notion of subculture-as-other is hammered home in the work of Omar Gamez. In his series Natura, Gamez took a voyeuristic journey to Cuernavaca Morelos, a monthly meeting place and nudist colony for gay men. These mid-sized color photographs depict the usual scenes of such a venue, but in a loving way. The men here seem relieved to be able to lounge about in an oasis of acceptance in an entirely machismo-based culture. This affection gives way to a more menacing tone in his Dark Book series, also included in the exhibition. Here, Gamez has created “…timeless images of a latent Mexico City,” meaning the real nitty-gritty of the gay subculture there. These smaller black and white images, which are often blurred (as if to convey a sense of covertness), on the one hand are more predictable than the Natura series, but on the other convey a real immediacy that both disturbs and entices.

Adrian Aguirre’s work consists of wide-angle digital prints of an abandoned Mexico City. The urban structures evoke dramatic black and white realms where the missing inhabitants are romantically absent. These photographs, identified as backdrops for a screenplay written by the artist, maintain a strength of imagery on their own. 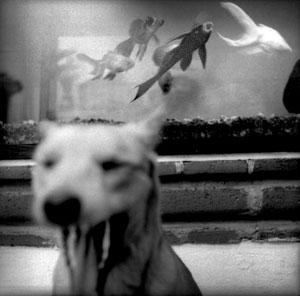 The pictures of Enrique Greenwell lack a similar strength. They are a random collection of day-to-day images, diary-like in their presentation. The works convey little for the viewer to relate to, other than the odd notion that this could have taken place in my life, too. Dante Busquets’ series Sateluco: Entre los 10 y los 20 [Sateluco: From 10 to 20] probes a similar vein of banal exploration, only on a much more personal level. His conceit is to travel back to his adolescent years and document the places of his youth. It does not go much further than that, however. The viewer is left with an overflow of personal imagery and little else.

The artists in 6–Pack do well to explore the multifaceted themes in their native culture. The works that resonate the loudest allow the viewer access on a level that is both culturally and personally engaging. In the process, specific imagery of Mexico City takes on a universal quality. 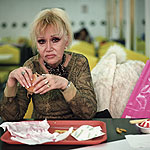