Every summer as a kid I rode with my whole family crammed in a station wagon to New Mexico. 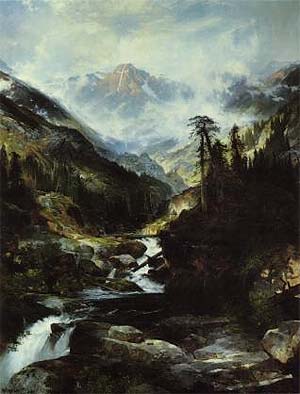 I thought we were explorers forging new territory. I was always fascinated with the landscape and the wide, open sky. Currently at the Museum of Fine Arts Houston is an exhibition entitled The Modern West , curated by Emily Neff. After briefly speaking with her about the show, I was intrigued by her idea about the West and modernism. You can write a whole paper on the subject, but I was more interested in how Neff has presented works by Jackson Pollock, a Navajo sand painter, an Ansel Adams and a Georgia O'Keeffe together. Is there a correlation among these works? I am not quite convinced.

At the entrance to the show viewers are confronted with an exquisitely painted landscape by Thomas Moran, Mountain of the Holy Cross (1875). I love that Neff starts you out in an actual place so you can virtually leap into the West through the painting. I immediately dive back into my history of photography class and remember William Henry Jackson, Timothy O'Sullivan and Ansel Adams. These photographers, among others, who explored the western landscape and showed the rest of the world what it looked like in reality were sent out on government surveys: Jackson accompanied a survey to document Yellowstone, the Tetons and the Rocky Mountains, which also included finding and documenting the Mountain of the Holy Cross. [1.] Viewing his photograph with Moran’s painting suggests a seamless collaboration between painter and photographer, forging the landscape together as they document, interpret and bring their vision of the West back. O'Sullivan's Sand Dunes, Carson Desert, Nevada (1867) and Ancient Ruins in the Canon de Chelle, N.M. (1873) show how landscape photography was more than simply recording the land. In fact most all of the black and white photographs in The Modern West are simply breathtaking and, with the exception of a few paintings, remain my favorite part of the whole show. 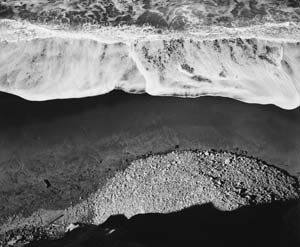 Ansel Adams' Surf Sequence (1940) is such a treat to see all together. The small 8 x 10 photographs hanging together resemble an abstract painting. Shot from above, almost as if from a cliff top, looking down at the ocean tides rolling in and out, they capture the movement of the waves and the texture of the sand perfectly. The two dune photographs by Edward Weston and Laura Gilpin are simply serene. They make the dunes look like the surf and vice versa. Neff placed these photographs in the category of ’The Abstract West’. I have a tendency to agree with her on this point, although some paintings in that section are less cohesive. Maybe I am just more of a photography viewer, but the leap from the small black and white Adams' surf photographs to a Navajo sand painting is tricky for me to make.

That said, the conversation between the dune photographs and Alexandre Hogue's Erosions No. 2, Mother Earth Laid Bare (1938) and, even more so, Grant Wood's Spring Turning (1936) is clear. Wood’s account of the rolling hills, with their patches of green and the brown squares where the plow has turned over the earth, speaks clearly to the dune photographs and even to Dorothea Lange's images from the Dust Bowl era, particularly the one of the cotton fields, Irrigated Field of Cotton Seventy Miles from Phoenix, Arizona (1937). These images share the same spare quality that allows your eye to move across the land and create a feeling of place even if you haven't been there before. I love all the long horizon lines, the expansive view of the fields and the wide, open sky in the Dust Bowl photographs as well as in the images from the ‘Southwest’ section of the exhibition. 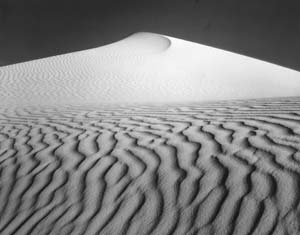 The Edward Weston and Paul Strand photographs in this section are by far and away the most impressive. Weston has perfectly captured the clouds’ puffiness and movement in his photographs of White Sands and a small wooden church (both in New Mexico). Strand's images are much darker and have more deep blacks to them, but still the clouds serve as a radiant highlight, even when he gets down low for Church Buttress, Ranchos de Taos, New Mexico (1932). The landscape paintings in this section are quite beautiful as well. No one in particular stands out, but they all give that sense of place (it must be the colors from the area that I am used to). Last but not least to mention is the Ansel Adams’ Moonrise over Hernandez, New Mexico (1941) with its impressive use of light and shadow, almost transcending the medium as it conveys a brush stroke with the light streaks in the background. The town in the foreground, the mountains in the middle ground and the night sky with the bright moon in the background form a perfect picture. 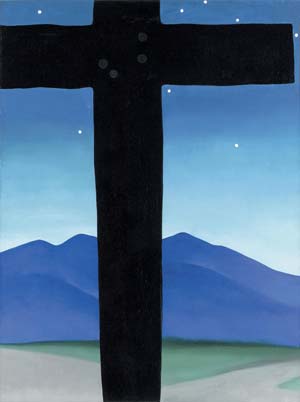 I relate to the Southwest section of the exhibition simply from my travels to New Mexico each year and trips with my grandmother to Ranchos de Taos. The standout Georgia O'Keeffe painting here, Black Cross with Stars and Blue (1929) takes me directly to the nighttime summer sky in New Mexico. It was not until this past year while visiting El Paso and Marfa, that I truly felt I was once again traveling 'Out West.' After arriving in El Paso and finding my hotel, I watched the sun set behind the mountains. As night fell the whole city became covered in a blanket of lights with the mountains in the background. It was really beautiful. What impressed me the most was the landscape, with the mountains and the city conveying this sort of strange empty feeling.

Driving alone in a rental car out of El Paso away from the sunset and into Midland / Odessa, I had this desire for adventure. The land of the West encompasses travelers, making you feel small in comparison to the mountains and the night sky. I felt as if I were setting sail on the open road, discovering the landscape. This is where I get jealous of the explorers, the photographers and the painters going West for the first time. It made me want to take tons of photographs and run off the side of the road for the perfect shot. I guess I will have to save that for another trip. I never did get to drive across the country: the car rides to New Mexico and West TX have been the closest corollaries I have to those earlier journeys. For now I will settle on going 'West' with Neff.

Rachel Cook is the editor of Glasstire. 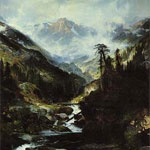