To see a hot pink oven painted NASCAR-style with “Bitchen” across the front is thrilling, but then to see artist Katie Pell take a lighter and light it and watch flames shoot up three feet in the air is downright joyful. It’s irreverent, but in a more inventive way than tagging or running red lights. Pell exorcises the melancholic dread I normally associate with these machines and replaces it with a playful wildness. 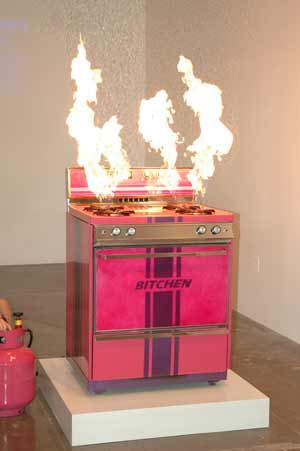 Pell uses a mixer to control Bitchen’s partner, an orange oven painted with hot rod flames and equipped with shocks. Holding an appliance that is normally used to whip up Betty Crocker cake mix, Pell pushes the buttons with a deadpan look, maybe a poker face, that conceals the sheer delight she must feel about her contraptions. The metal oven rocks about as if it were possessed.

In Grease, the movie I grew up with, the boys worked on cars and staged dangerous races, while the girls waved their handkerchiefs in terror and failed beauty school. Low rider/hot rod culture goes with drag races, rebellion, youth, and men. Our culture associates these activities with the masculine realm, just as much as it associates the cooking and cleaning with women. 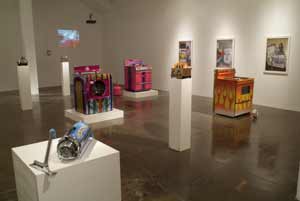 But Pell’s transformed appliances — a dryer, a refrigerator, two ovens, a vacuum cleaner and three toasters — occupy a different world. Or rather, it’s the same world, only reimagined through Pell’s eyes. Her comic book by the same name as the oven, Bitchen, sketches out a narrative involving a group of women who customize kitchen appliances. On the cover, a woman flexes her muscles Popeye-style in front of the Bitchen oven. Pell’s ideal woman is not a doe-eyed glamour-puss, but a hairy-legged, muscled hippie who drinks beer out of bottles and knows how to fix a dryer: “Now it can dry a load of towels in 15 minutes, but don’t leave the house with it running.” Macramé hangs in the background inside the house, but everybody’s mostly lying around outside in the yard. Bitchen ‘s droll humor, overwhelming personalities and exhaustive details make it an unforgettable comic book. But mostly I want to hang with these women, who work at All-Mart, “talking about tattoos and quitting.” At a Goodwill Store, they search for ‘small appliances and Frye boots”; one customer wielding a plush monkey is labeled “unknown kind of crazy.” Pell drew 17 pages in all, a combination of her characters” ideas, conversations and dreamy imaginings.

The comic book makes Pell’s appliances practically come alive and makes me like them even more. It’s as if one of the characters has stepped out of the book and I get to meet her. In script across an Electrolux vacuum cleaner on one side is written Cleanliness, opposed by Hot Rodliness on the other. The words appear on a yellow banner, in a singsong fashion, against a soothing sky-blue paint job. The vacuum’s hose doesn’t look as if it’s up for sucking in dog hair. It’s covered in a shiny, translucent, light blue fabric.

The most vibrant paint job, in a style called “patterns,” belongs to the dryer. Pell upholstered the rotating tumbler with fuzzy leopard-skin fabric. A motley assortment of highball glasses rests magically on both sides of a glass shelf. Setting the shelf so it cuts diagonally across the tub, along with the cheesy nightclub atmosphere and cut crystal, mocks the dryer’s intended function and offers alternatives on heat and spinning. 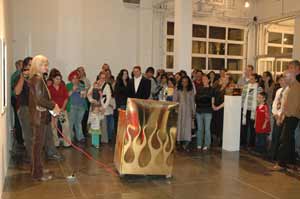 A refrigerator also becomes a bar. I think of James Bond reaching into it for a martini, but then I switch it to Hugh Hefner. Pell’s refrigerator is too Texan and seventies for the false British glamour of Bond. But it does play at creating the false upscale swank of the Playboy Mansion, the kind of look that’s supposed to get a woman’s clothes off (that’s what made me think of Bond). What’s the other thing that really gets a man’s heart beating? On the refrigerator door, Pell has painted a typical south Texas hunting scene of a buck and a doe against a tree, no doubt lured near the blind with some generous sprinklings of corn. The refrigerator stands slightly open to reveal wood paneling, an elegant crystal light fixture, two racks for wineglasses and two drawers with crystal pulls. On the wall nearby, a panel of glass mirror tiles reflects the back of Pell’s bar/refrigerator: another deer scene burned into wood.

The Playboy associations come directly to mind because of the alcohol/bar element and the deer scene. Is it that this entire realm is macho-fied in the same way that kitchen appliances are feminized? Pell’s synthesis creates an object equivalent of a double entendre, with the requisite sexual innuendos intact.

Out of the four car customizing studios Pell worked with, Get It Up Productions invited her to a car show they hosted in Floresville, where she exhibited her ovens. She won Second Place, Orphan Division (“orphan” meaning that Pell is not a part of the car club). In her installation Pell exhibits footage from the car show in which she demonstrates her ovens” tricks, calling attention to the fact that through this project she brought various communities together. The night of the ArtPace opening, many people from Get It Up were there, distinguished by their red T-shirts with their club’s name on it. They came in support of the work, having been involved in the process of its making, and sat through the entire artist’s dialogue and even Allison Smith’s performance, which came after Pell’s.

Pell’s art is the very best kind of feminism because it is exactly this kind of activism that gets somewhere. Pell appears to have drawn together two disparate cultures and provided them with alternative ways of perceiving each other. What is feminine about men gussying up their cars? And what is masculine about women doing the same to their appliances? The souped-up appliances not only appear as fabulous objects in their own right, but they send up the silliness of gendered categories: a woman’s kitchen, a man’s car. 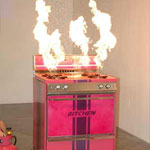