“Taping up windows is a waste of time because tape isn't going to keep
your neighbor's garbage can – which he should have stashed in a place
where the wind can't grab it – from breaking your window when a 100 mph
wind flings it at your house. . . If you waste time taping your
windows, about the best you can hope for is that the storm will miss
your house, and the tape won't be too hard to remove,” says Jack
Williams on USAToday.com, and every authority agrees with him. 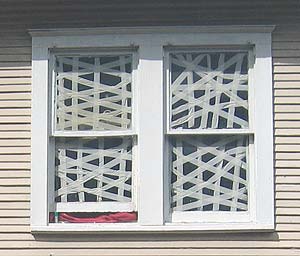 Yet as Hurricane Rita approached Houston, tens of thousands of people began putting tape on the glass windows of their homes and businesses.

Taping is an example of a truly widespread folk mythology in action, unusual in today's information society. Beliefs about hurricanes and how to prepare for them are little-used, spread through survivors' tall tales and hence not subject to routine debunking by actual experience. Since there's no basis in fact for the practice of window taping, people are free to follow their hearts, taping their windows in the pattern which makes them feel the most secure. The patterns are shaped by convention (what did the neighbors do?) and aesthetics, not experience or data. 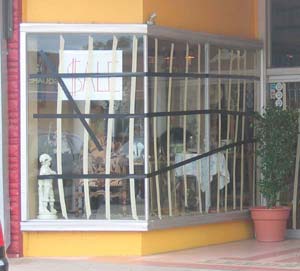 A surprising number of clear sighted window-tapers admit they're doing it primarily to feel better, to be doing something active about the potential destruction they fear. Robert Terrell of Baton Rouge sums it up on his blog: “I'm not really sure if taping your windows does any good but it does make me feel like I'm doing something to get ready for the storm. So taping the windows is what I'll do.” At least it's a break from the color enhanced hell-spiral on the TV.

In Houston, I saw three main theories of window taping, which I'll call X's, Stars and Bars. X is the familiar favorite. Many people stop here, the X creating an emphatic, symbolic NO!, like the dead eyes of a cartoon character. Some continue, adding a third line to form a snowflake or a fourth line to complete a full, eight-point star. No one ever adds more than eight points. On large windows, where four lines of tape don't seem enough (especially at the edges), many people superimpose a bar pattern over the star to fill in the gaps. X's and stars recall scaffolding, or the diagonal bracing familiar from radio towers, cranes and other lightweight but sturdy structures. They have a scientific look and are presumably chosen by those whose faith is in an intuitive (but in this case illusory) sense of civil engineering. The bar pattern has a primitive, but powerful symbolism: a grid of horizontal and vertical tape blocks the wind's entry like a portcullis at the gate of a medieval fortress. So conservative is myth that, in a city full of taped windows, I saw only one iconoclastic house using neither X's, stars nor bars, but a stretched grid, like an old-time diamond pane window. 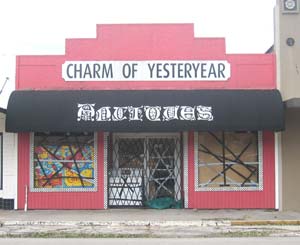 One obvious pattern is never seen: the vertical cross. If ever there was an event for which asking Jesus' protection is warranted, this is it, especially if you're hoping masking tape will stop a 150mph gust from tearing the roof off your house. Why not? Is it too much like the typical panes of a window to seem effective? It's a measure of our deep, unreasoned faith in technology that the image of choice to ward off an act of God is not the cross, but the Tinker-toy.

Some people just go crazy, taping any old which way in ragged, shaky lines until the tape gives out. It's the madness of despair, people who know it won't work, but can't think of anything better. These are the scariest windows, foreshadowing riot, cannibalism, and arson in every desperate line.

Easier to scrape off than tape and easier to install than plywood, if you can afford it, is comprehensive insurance combined with an impromptu holiday I think we should call an “evacucation”. With meteorologists forecasting a decade of intense hurricanes, I foresee the growth of a lucrative, if sporadic new travel industry. Next storm, I declare a city-wide window taping contest, with prizes for most apocalyptic, most artistic, and most reassuring.

Bill Davenport is an artist and writer and was one of the first contributor to Glasstire.