Tenacity is a necessary condition for opening a gallery in any mid-sized urban environment. 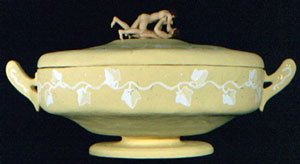 Risk-taking is a more universal condition for success in the gallery world, regarding the choices both of what work to show as well as where to locate. When it comes to picking out real estate, galleries are always walking a line between cost, security and the all-important coolness factor.

Cynthia Mulcahy opened Mulcahy Modern in the State Thomas historic district of Dallas in February of 1994. By the time she moved the gallery to Oak Cliff’s Bishop Arts District in March 2000, she had decided that committing to a tight stable of twelve artists and showing them annually would be the best forward approach, aesthetically speaking. She had a small, regular core of clients who chose her artists consistently. But the location risk took some time to play itself out, and for about a year it was a struggle. Some clients would call and ask when the construction would be over in the district so that they could park more easily.

Now Mulcahy’s gamble has paid off. The Bishop Arts District is buzzing with activity and is a destination for all of Dallas as well as the increasingly sophisticated neighborhood dwellers. Hugely successful upscale restaurants have opened up nearby, increasing foot traffic.

Mulcahy’s recent show Decade was a celebration of her tenure as a gallery, and a showcase for her erudite group of artists who hail from all over the state. Within her small group of artists, Mulcahy has chosen carefully between abstraction and figuration as well as between the conceptual and more traditional, formalist approach to making bodies of work. I asked if she consciously chose more women than men and she said that she was proud of her women artists, but that it was always the work that drives her decisions to add an artist to her group. 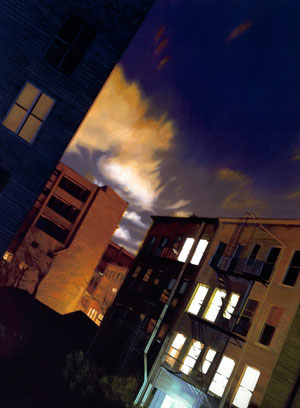 Mulcahy’s more minimalist offerings are Derek Saunders’ poured paint blocks and Meg Langhorne’s artificial flower series. There’s something solid about this work that belies its simplicity, and balances out the sharp, disquieting watercolors of Corbin Doyle, who paints dead birds and men in their underwear shaving in the lavatory with guns lying around. Robert Hamilton’s perfect circles of mixed color ink on velum look like encyclopedia illustrations of distant planets, and have a satisfyingly science fiction quality that avoids falling into facile, horn-rimmed illustration. 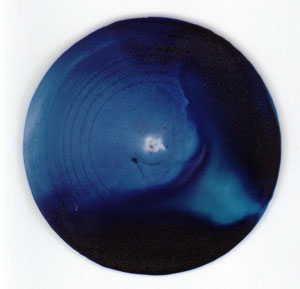 Like Eberle, Christine Bissetto is another artist whose work changes significantly from show to show. First working with blocks of colored plaster, often filling up everyday objects, she now has focused on negative cutout images of insects. Changing the look of one’s work so radically is often tacitly discouraged in art galleries, for the obvious reason that it’s easier to sell the familiar. Mulcahy’s liberalism with regards to her artists’ output has always created a dynamic that her consistent collectors admire, and that helps draw in more speculative collectors looking for the next big thing. From San Antonio’s Nate Cassie’s sugar shoe sculptures to Rosalyn Bodycomb’s somber and complex figurative paintings of mature people at the beach and skewed fire escape views, the work covers a large and eclectic semiotic space, and yet heads in a surprisingly cohesive aesthetic direction.

Mulcahy’s next show is Jin-Ya Huang’s ultra hip abstract photography mounted on the honeycombed aluminum material Sintra. Many artists in the Dallas area use this mounting material, but with Huang’s blurry, grainy, colorful photos, the mounting creates a synergy that borders on an uneasy sense of danger. Beautifully empty, you feel that the work could fly off the wall and attack you. One thinks of someone riding around an urban landscape happily drugged out and with no worries except perhaps who’s driving.

Cynthia Mulcahy is, and she knows what she’s doing.

Mark Babcock is a writer and artist living in Dallas. 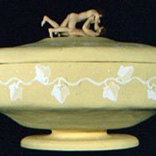