Paradise Omeros (2002) and Baltimore (2003), two recent works directed by preeminent British artist, filmmaker, and scholar Isaac Julien, run back to back in the Hudson Show Room at ArtPace this winter.

Both works are 35-mm films presented as synchronized, three channel DVD projections—a format the artist first explored during his 1999 ArtPace residency. The result in that instance was the stunning three screen film installation The Long Road to Mazatlan (1999), an extravagant queer cowboy saga that earned Julien a Turner Prize nomination in 2001.

Like The Long Road to Mazatlan, Paradise Omeros and Baltimore bestraddle distinctions between fine art and straight filmmaking. Both are gorgeous triptychs tinged by a preoccupation with identity and its myriad modes of formation. Despite this fixation, Julien’s work exists in total counterpoint to so-called ethnographic filmmaking. He investigates roles of hybridity, and individual efficacy in the development of cultural identity, but also emphasizes the lush and in a way that would make any self-respecting cultural anthropologist flush with academic indignation.This is of little consequence, since Julien’s objectives are overtly cinematic and unapologetically subjective. 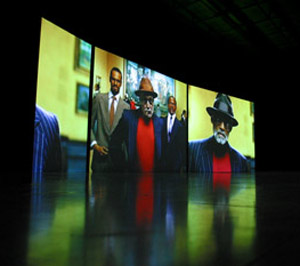 Images courtesy the artist and ArtPace.

Paradise Omeros elegantly probes the creative possibilities of multi-screen filmmaking. The piece draws its name and narrative from a poem by Nobel Laureate Derek Walcott. Julien fuses this updated Homeric epic with an allegorical drama shot in exotic St Lucia and inner city London of the early sixties, set to a musical score by Paul Gladstone Reid. The underlying drama is hallucinatory and fluid, allowing for both a narrative and a visual experience, as the viewer desires. At times, the narrative disappears altogether, dissipated by the overwhelming sculptural presence of the installation. The experience is surreal and transformative.

Baltimore replaced Paradise Omeros in mid-December and runs through the end of January. It is a different beast indeed, both visually and conceptually. The lush and saturated Paradise Omeros effectively redresses issues of racial, sexual and cultural identity, but with its cool blue hue, state of the art special effects and slightly cynical air of post-postmodern detachment, Baltimore pushes any lingering identity issues over the edge of absurdity and into a chasm filled with undiluted, self-deprecating satire.

In Baltimore, Julien overtly challenges the relevance of time and place in establishing period-specific racial stereotypes. The artist draws on some of his earlier, more conventional works, including footage and research compiled for the documentary Baadasssss Cinema (2003), which recently ran on the Independent Film Channel. Baltimore visually interweaves three disparate cultural institutions in the city’s urban area—The Great Blacks in Wax Museum, the Peabody Institute, and The Walters Art Gallery, using these very different physical spaces as the backdrop for a slightly choppy composition that blurs the straightforward trajectory of the time-space continuum, all the while humorously belittling the traditional filmic gaze.

Again, the use of a three-screen format indulges a vast visual latitude. Baltimore features the decidedly bad ass actor/director Melvin Van Peebles, arguably the progenitor of the uberkitsch blaxploitation genre. Throughout the film, Van Peebles is stalked by a shape shifting, vaguely alien entity played by the conspicuously lovely model-slash-actress Vanessa Myrie. The result is at once a retro romp through blaxploitation’s hell-raising heyday and a big budget, neo-futuristic, nonlinear fantasy that both parodies and visually deconstructs pan-generational notions of "blackness"—specifically, those propagated by the film industry.

In truth, critics (myself included) may be far too preoccupied with the role of black and queer identity in Julien’s work. In Paradise Omeros especially, labels of "black" and "white" are quietly rendered obsolete, not simply through the introduction of an overt, Creole gray zone, but through an artful, culturally nonspecific universal yen. In Julien’s films, want, desire, lust, and the suspenseful pursuit of pleasure transcend cultural distinctions. For the filmmaker, these sentiments exist not simply in reaction to perceived racial and cultural differences, but in spite of them.

Images courtesy the artist and ArtPace.

Anjali Gupta is a freelance critic and video producer based in San Antonio, TX. 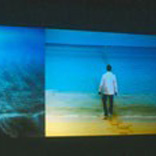