Air Patterns is a dazzling large scale artwork produced by El Paso artists Susan Davidoff and Rachelle Thiewes. The installation is very much an extension of each artist’s own body of work, exploring mathematical patterns and structure found in the natural world.

Longtime friends, Davidoff and Thiewes are come to this project from different areas of expertise: Thiewes is known for her innovative jewelry design, while Davidoff creates art that explores plant forms. Commenting on their unique working relationship, Davidoff emphasizes, “Even though I usually work in two dimensions and on a much larger scale, while Rachelle’s concepts are small scale, three dimensional works designed for the body, there are still many similarities in the manner in which we approach what we do. We both enjoy observing nature while hiking, and translating these observations then becomes the focal point of our art.”

In the current collaboration at the El Paso Museum of Art, the installation layers elements of each artist’s work. By virtue of their stark blackness, Thiewes” large, wall-hung metal sculptures are the dominant features in an installation that fills its gallery. The severity of these dark forms is softened with layers of translucent cloth hung in front of them. In this ethereal atmosphere, shapes of flowers and other plants seem to float suspended, while panels of red and mauve suggest the transcendent otherworldliness created by intermittent clouds.

Thiewes and Davidoff first entered upon the idea of producing a collaborative effort while teaching a workshop at the Arrowmont School of Art in Gatlinburg, Tennessee. The two spent their free time hiking, sitting on rocks and simply letting their creative thoughts intermingle. Air Patterns is not their first collaborative venture. In 1999, the two worked with El Paso artist Becky Penn to create series of eight unique books. The book project assured the artists that their works could co-exist while maintaining their own integrity. Inspired by the book project, Air Patterns seeks to magnify the experience of looking at pages into one large installation. “It is our hope that the viewer will experience that same intimate relationship they have with books while looking at our work”, Thiewes comments.

For Air Patterns, each artist has transformed her usual work to fit the scale and intent of the installation. As a jewelry designer, Thiewes has always worked to the scale and requirements of the human body. Light, sound, and movement are central considerations in her work, and in responding to the demands of a large museum installation, she had not only to enlarge her designs, but also translate them into two dimensional figures that would remain static. In order to do this, the artist first created a small series of small, hand-made objects which were then projected to attain a larger scale. Photographed, these became the patterns which the artist used when cutting out the metal forms which translated her three dimensional work into simple forms expressed by black lines.

Changing mediums also presented a challenge for Davidoff, who normally works in ink and pigment on paper. Air Patterns required her to experiment with charcoal on very sheer fabric. She began by making high contrast photographs of her images. These revealed details which in turn could be translated onto the filmy cloth.

Both artists emphasized, “We do not view our work separately, but rather we joined as one creative mind. Our intent was that the work will not only be collaboration between artists, but one which includes the engaged viewer as well.” 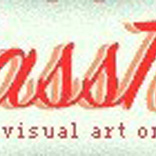