The Ten List: The Worst of “Work of Art” 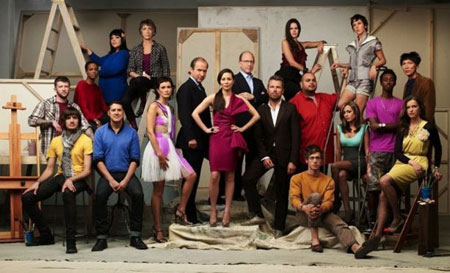 Maybe you watched the reality TV show “Work of Art: The Next Great Artist.” Maybe you enjoyed it, or maybe you want Bravo to give you those years of your life back. Maybe you won’t even admit to watching it. I could make a vociferous argument both for and against the show, but ultimately, despite the show’s myriad flaws, putting art out into popular culture has got to be a good thing. As distasteful as it may be for some to embrace “Work of Art,” how you feel about it may ultimately depend on whether you want art to be a chummy club of insiders or something that is relevant to everyone. At least WOA is a step towards putting some element of contemporary art out into the homes of basic cable America.

But, with that goal in mind, the show could and should be SO much better. Here, in no particular order, are the ten worst aspects of “Work of Art.”

1. Moronic challenges
Interpret the experience of driving an Audi? Could there be a dumber or more crass challenge, A; and B, could the product placement be more ham-fisted? Hey, speaking of ham, there’s an idea for next season! Cue host China Chow:

“Artists, Hickory Farms is well known for their tasty processed meat products. For this challenge you will incorporate a ‘7 – 9 lb. Spiral Sliced Honeygold Ham™’…Tom Colicchio of Top Chef, (Bravo, 8 pm, 9 central) will be the guest judge for this challenge. Chef Colicchio will evaluate how effectively you incorporate your Hickory Farms pork product into your artwork.” 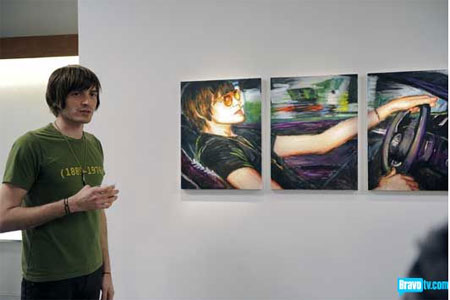 2. Ickiness
Nothing like being reminded of how sleazy the art world is from the comfort of your couch. From judge Jeanne Greenberg Rohatyn saying artist’s work needed to be “updated” (like say, sofa upholstery?) to judge Bill Powers’ discussions of whether he could sell a particular work, to seeing how easily swayed the judges were by lame work accompanied by pat line of bullshit (in the case of “boyishly cute” Miles) or big fake boobs (in the case of Jaclyn). Those contestants’ missteps were far more likely to be forgiven than those of the other contestants, which leads us to…

3. Eliminations driven by Nielsen ratings?
If you were quiet, ethnic, gay, chunky, old and/or lacked sex appeal, you had a target on your back. Those were the first people kicked off the show. Although an African American guy ultimately won, he had to be young, unassuming, cute and nicer than any reality TV contestant ever.

The first artist to go was, Amanda, low-key academic black woman, a professor and Cornell-educated architect. Although her painting wasn’t great, there was much worse stuff. (Clown painting on a palette, anyone?) Had she habitually swiveled her head and called everyone “girl” or engaged in any other producer-pleasing stereotypical “sassy black woman” behaviors, they would, no doubt, have guaranteed her a much longer run.  The second to go was the Vietnam-born Trong, one of the more established artists in the show. He committed network blasphemy by mocking reality TV with his work – that, combined with a bowl haircut and asexual persona, got him shitcanned. Judith, the sixty-something feminist went next, followed by two of the strongest artists, John, a gay white man and Nao the 40-something zaftig Latina performance artist. They all went before anyone simultaneously young, cute, white and straight got kicked out. A couple people later, Mark, the really hefty (but funny!) Latino guy got the boot after he bravely went shirtless and showed off is stomach-explosion scar (don’t ask) for his art. Coincidence?

And maybe these aren’t just the producers’ ratings-based prejudices—maybe they are the judges’ (un)consious prejudices? According to Jerry Saltz’s New York Magazine blog post: “Bravo never told me what to like, dislike, allow, or discourage.” That’s even more disturbing. 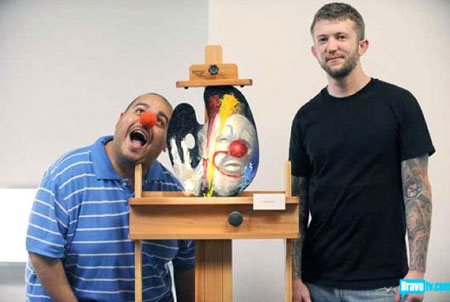 4. China Chow
Bless her heart, it’s possible she’s a lovely human being, but as a host China Chow is as wooden as an entire Home Depot lumber department. As a judge, she has zero qualifications – other than being “born into a family of collectors.” (Honey, I was born into a family of engineers and I still got a D in Algebra.) Chow really had nothing intelligent to say about the work, but like other rich people who lack personality or discernable talents, she used fashion to try to make herself seem interesting. Chow’s clothes were her best and most entertaining contribution to the show.

5. Simon de Pury
Unctuous auctioneer with a comb-over as a mentor? Whose bright idea was that? Sure, de Pury and Tim Gunn from Project Runway are both natty dressers, but Gunn was actually on the faculty at Parsons. Why, exactly, would you choose a mentor who sells art for a living instead of one who makes art for a living? For tips on pandering to the market? Which leads me to…

6. Lack of artist judges
Sure, they threw in some artists as “guest judges” but they didn’t pay much attention to them. (They didn’t even listen to Andres Serrano on the shock art challenge.) Admittedly, the show’s treatment of artists as children to be tolerated and guided is not unique in the art world. (Although, I don’t think ANYBODY should have listened to David La Chappelle, who came across as addlepated or chemically altered – or both.)

7. Jerry Saltz
To be truthful, Jerry Saltz was the best thing on the show, but he should have been so much better. I’ve always admired Saltz’s writing, but sometimes it’s not good to see the man behind the curtain. He came off as smug and strutting, and you can only blame so much of that on editing. I like the way he thinks about art in print, but reviewing work with the artist standing there telling you about it is something one rarely does as a critic. What the artists said about their work and how they came off as people seemed to weigh heavily in how Saltz viewed their art. (See #2 and #3) For example, how would Saltz have responded to Nao’s loosing shock art challenge performance (weird, icky, abject and bag-lady-ish) had it been performed by skinny, busty, bleach-blonde Jaclyn?

That said, Saltz’s morning-after New York Magazine blog was a big step towards redemption. The blog’s comments and Salz’s interaction with the commenters created some surprisingly interesting discussions. 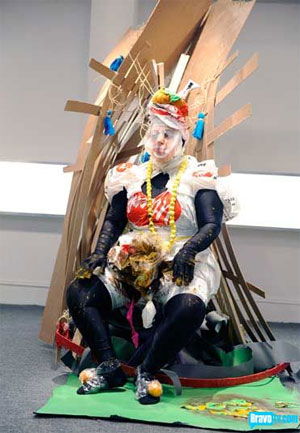 8. The judging
From what I can gather, the judges rehearsed comments before filming. I say make ‘em work without a net. And one WOA blog commenter suggested that the judges vote on the work before they talk to the contestants. I think that’s a hell of an idea. When you a review a show and let the artist and/or curator chat you up, it’s easy to get spun (see above). As a supposed professional, basing your judgments about an artwork/exhibition on what the artist or curator says disproportionately rewards those with good PR skills. Professionals seeking to objectively evaluate the work should view it as anyone who walks in off the street would—without the artist acting as live Acoustiguide.

9. The art sucked
“Work of Art” didn’t exactly bring together a stellar group of artists. But even the most talented ones turned out some real crap. I understand “challenges” with tight time frames are part of Bravo’s reality TV formula but visual art isn’t food or clothes. However creative a chef or a designer, you are still going to end up with something to eat or something to wear. Art can take myriad forms that require radically different amounts of time to create. Tight time frames create suspense and drama but they don’t make for the best art. 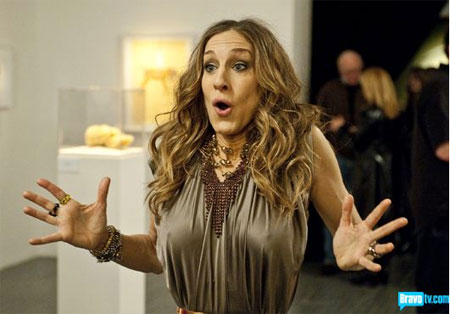 11. The best stuff was on Twitter
The wittiest and most insightful comments weren’t on the show itself but on the #workofart Twitter feed. Someone, probably on Twitter, suggested that the next season feature a Tweet crawl across the bottom of the screen. Will Bravo have the balls? Stay tuned.

i continue to be amazed that a room full of experts routinely confuses “open” with boobs and narcissism. #workofart
reverend_bunnie

I hate to say it but anyone who talks about their art as though it were a “journey” deserves to be eliminated. #workofart
Artfagcity

Now I know what people who work in fashion feel like when they watch Project Runway. I’m so sorry. #workofart
hragv

You know what would make #workoFart unbelievably awesome? Chuck Barris and a gong.
Cmonstah

For his big final piece I predict Miles will kill and eat Abdi. Simon will praise his boldness. #WorkofArt
Juniorgeneral

Thanks Jaclyn for setting feminist art back about 40 years. #workofart
gay_interrupted

Can’t wait for the finale. Challenge: use Jeanne Greenberg Rohatyn’s face to etch a bucolic winter scene into a 4′ x 8′ mirror. #workofart
Kickthebobo

A treehouse made by meth addicts would actually be much more polished than that piece, done in half the time. #workofart
Theodorefisher

FYI, the second season casting call is out…

Kelly Klaasmeyer
is the editor of Glasstire.

KELLY:
Thank you so much for watching. Yes, Jerry Saltz’s piece was his chance for redemption in the NYC art circles. Your bullet point development of WOA
problems made me feel as though I had witnesses the various episodes. This could also be because knowing your kick-ass style is so meaningful.
HJB

…and shouldn’t be.
This is my opinion only. No need to delete my post.

what you refer to as her ‘kick-ass’ style couldn’t kick it’s way out of a well wet shit covered bag of any paper/recycled content.
Meaningful???!!! I just wet my pants.